A man who saved many lives: Showel Markhap gets President Awards Service Medal 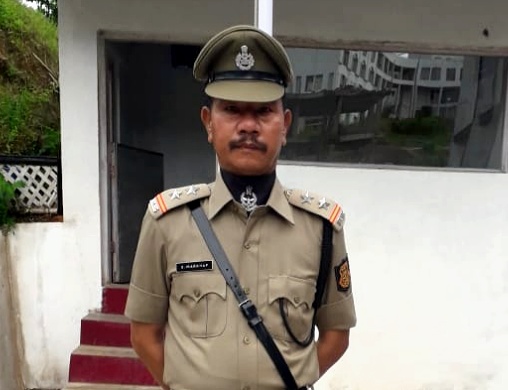 Wearing khaki is always a passion for him. Saving life is a determination. Serving for 35 long years in Border Wing Home Guards Battalion, Sub Inspector Showel Markhap was awarded President Service for meritorious service 2020 for his outstanding contribution towards the service. He is amongst the seven recipient of this Medal from the Civil defence and Home Guards Organisation from the North East, this Independence Day.

The optimist news spoke to Markhap who despite multidimensional challenges, the brave-hearts of Home Guards Battalion always displayed high level of dedication & commitment.

“I always wanted to wear uniform, Since Childhood wearing uniform and service people were my passion.”

A resident of Wahingdoh Shillong, Markhap (56) joined Border Wing Home Guards Battalion in 1985 and his initial four year stance, he was attach to BSF in the Border. He and his teams participated in rescue operations during natural calamities.
“I joined Border Wing of Home Guards Battalion in 1985 and in November itself I was attach to BSF for four years till 1989. It was a different experience altogether. In 1989, I was back to Home Guard Battalion.”

The trained BWHGB personnel saved many people trapped in floodwaters, streams and damaged houses. The State Disaster Response Force (SDRF) drawn from the personnel of Civil Defence & Home Guards trained by the NDRF have exclusively been devoted to the task of disaster management and have done a commendable job in conducting rescue operations at Garo Hills during floods and landslides.

“There is only one Border wing Home Guard Battalion in Meghalaya and we are many of us although exact number I cannot say. We are part of states Disaster Response team and whenever there is any kind of Disaster due to Natural calamity or otherwise we rush to save life. Our job is to save precious lives.”

The father of three, Markhap is a happy man in personnel life. Although, his children choose different profession, he has always encouraged them to live their life. The 56 year old Showel will retire in 2022, two years from now.

Border Wing Home Guards Battalion is form to assists the Border Security Force in preventing infiltration on the international border/coastal areas, guarding of VA/VPs and lines of communication and vulnerable areas at the time of external aggression. The battalions are deployed as follows: Assam (one bn), Gujarat (4 bns), Meghalaya (one bn), Punjab (6 bns), Rajasthan (4 bns), Tripura (one bn), and West Bengal (one bn).