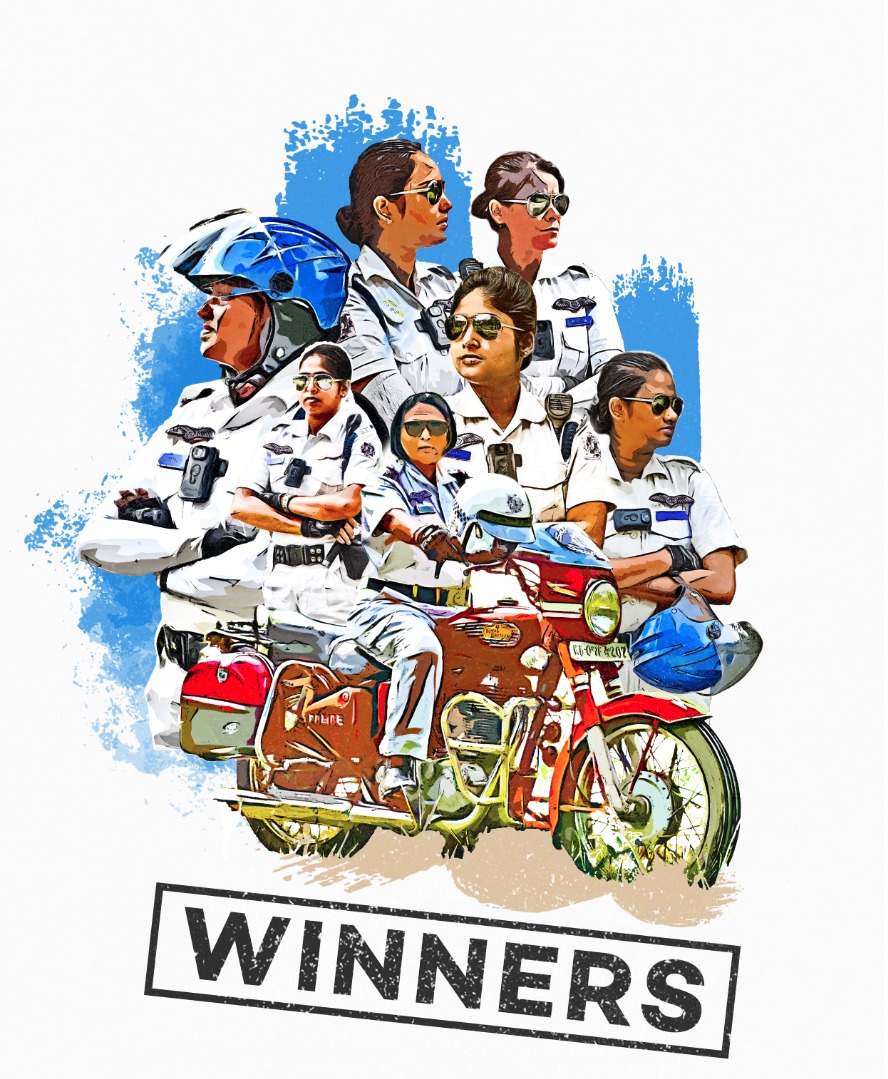 The Winners’ team of the Kolkata Police are doing every bit to make the city safe for women at the public places. Spirited officers, in uniform and plainclothes, travel the lanes and bylanes of Kolkata to ensure the safety and security of the women of the city, bringing about a very positive feel all around the town

Sahana’s life changed when she got through police service after rigorous training and hard work. Manika, a Santal woman, who could never imagine of even visiting Kolkata, today travels around the city on her bike. Her father was on cloud nine when he heard that his daughter Debolina had got into the police service as his desire to serve the nation in uniform had never been fulfilled. The service is challenging and that’s why it suitably fits with Chaitali’s and Bisakha’s fierce personality. Rousonara thoroughly enjoys the old wine in a new bottle as she always wanted to join the Indian Army but due to family constraints, ended up serving the nation in this manner. Kanika’s confidence and zeal took off with the increasing number of fingers being pointed at her mother for giving birth to a girl child. Sampa, a popular name in powerlifting and a tenacious officer of Kolkata Police, is leading a team of 28 women.

Today, all these women are champions in their own right and “Winners” who are part of a unique initiative by the Kolkata Police to terminate crimes against women in public places. Ever since its inception, the team has won hearts. Credit goes to Sampa Guha along with Sub-Inspector Zinnat Ara Khatun, Assistant Sub-Inspectors Mita Kansabanik and Atasi Das.

Sampa proudly narrates a personal experience she had in public transport when she was harassed while she was a Constable at the Burrabazar Thana in 1997. In 2001, she joined the Detective Department following which, in 2010, she was back at Lalbazar HQ. Last year, she got in the most prestigious job of leading the All Women Winners’ Team of Kolkata Police. Sampa has been pivotal in training the girls and been a constant guide to them. Genuinely, Sampa’s efforts have helped the team garner recognition in checking crimes against women and making public places safer for them.

Her story begins three decades back when Sampa, a student of Uttarpara Ucchya Balika Vidyalaya, found her interest in sports. She was taller than her classmates and didn’t find interest in indoor games. So, her father used to provide her with two sets of cricket kits because if the local boys would not take her in their team then she could at least blackmail them by luring them with those kits. At such a juncture of time, Sampa’s interest in athletics grew. The Bally Physical Cultural Association played a significant part in this regard.

Coach Subrata Debnath advised her to focus on powerlifting and since then there was no turning back. Under the guidance of her coach Ashoke Sengupta, she bagged numerous accolades. She is 17 times national gold medal champion, 2 times world champion with 2 gold medals in Commonwealth Championships and 6 golds in Asian Championships. The real feather on her cap came when her name was published in the Limca Book of Records for her exemplary performances in 2006.

“I’m extremely indebted to the Kolkata Police. Whatever I have achieved in life, the credit for it goes to the Department, my seniors and colleagues. I hope, more girls will come forward in the segment of sports, and make our country proud on the international podium”.

“People generally believe, the police force is completely liable for every crime in the city. And I also had the same notion. This negative image changed when I became a part of it. I started respecting my job and felt this was the best possible way to serve the nation.” Sahana, the vivacious 26-year-old from Dakshin 24-Parganas filled up the form for police service under the pressure of her friends. Then after nearly one year she eventually passed all the tests and was roped in the Winners’ team.

“One day we were patrolling near Shyambazar crossing and there was a tip-off about a pick-pocketer. We caught him red-handed. But when we asked the people of the locality to lodge a written complaint about it, all of them declined. That was really shocking.” Sahana says it is unfortunate that people are still scared to get involved in the legal procedure.

“We are doing everything for the people. We patrol proactively. We are taking 99 steps forward. All we want is people should take that 1 step forward and make this city safer to live in.” The team goes out in plainclothes and some others in uniform.

“I got into the service after an arduous struggle. But now, I consider myself blessed to be a part of this service” Monika belongs to the Santal tribe of Dakshin Dinajpur district. She was brought up with two sisters and one brother in a strained economic condition. Her father was the only educated person in her entire village which in turn motivated her to take up studies. Her mother fought all social taboos to give her children a proper education. But the struggle got intense when she got married in 2007. She had a patchy marriage.

“I enrolled myself in a language course for Santal, and I remember that day very clearly when I went to attend the first class my husband said only one thing to me if I go out to do this course he will either give me divorce or he will never let me enter the house.” But her zeal to learn never stopped. She tried her best to get a job and today, she is a Winners’ heart.

“I was extremely timid and I lacked that decision-making power. But now I consider myself to be free and liberal. I have chosen to live life on my own terms.” Her policing has not only changed the city’s face but has influenced her as well.

“My son threatens his school friends by saying – Be aware, my mother is the police.” Debolina was married off at an early age. She conceived just after two years of her marriage. There was no one in her husband’s house to take care of her son while she went out for her job. The 32-year-old from South 24-Parganas took came over to her parent’s house and started appearing for government exams. Finally, she got into the police service.

“My father was more delighted than I was when I got the news of my selection. His dream was to be in the force and he was an NCC cadet during his school days. But due to physical constraints, he didn’t get that opportunity. So when I got into the police force, he was living his dreams.”

24-year-old Chaitali from North 24-Parganas says harassment of women in public places had been rampant and the cops in her team do their best to keep it in check. However, empathy is what is lacking in this fast-paced world.

“Policing has changed me in many ways. It has made me disciplined and proactive. Now, I get ready in 10 minutes.” Chaitali belongs to a needy family. She has three sisters. The condition of her family has improved a bit but her parents never wanted her to join the police service.

“Now, I feel like a celebrity. When I go out, people come to take selfies. In my hometown when I go, neighbours ask a lot of questions – How is life there? How many accused have I caught? Do I feel scared and the like.

“I was tremendously naughty as a child and quite strong too.” 23-year-old Bisakha from Nadia belonged to a family of three brothers. All of them supported her in her career as well as in life. When she took charge in Topsia Police Station, her brother used to drop her and pick her up. But now she is way too confident to take a stroll in the lanes and bylanes of Kolkata all by herself.

“I always wanted to join the BSF. I got selected but in the written examination I couldn’t make it to the list for just 1 mark. So, my second best option was this.” She considers herself to be blessed to help those who are in need.

“Now, I see women doing night shifts. Maybe, they feel safe because we are on the roads. I really feel privileged to serve my people.”

“I wanted to join the Army and serve my nation at the border. But my family didn’t allow me.” Rousonara, the youngest among five sisters, thoroughly enjoys being in the police force. While describing her daily routine she narrates a story which has left an imprint on her.

“On December 25, 2018, we caught a guy in front of the Cathedral near Birla Planetarium. He was harassing a few girls late at night around 1 or 2 am. As we were doing the procedure, he pushed my friend who was holding him and ran away. We had to chase him for nearly 1 km to finally catch him. The girl who fell down could have come under any running vehicle.” These are the everyday challenges of this service.

“We work in shifts and we have cameras to record the incidents. Women who are in trouble can immediately call 100 and inform the police.”

Kanika Mondal: Girl Child – a curse or a blessing?

“My parents have always supported us. They never restricted us from doing anything. Neighbours, relatives and others used to tell them what will a girl do. Social taboos are still there in villages surrounding a girl child.” Kanika comes from a village in Burdwan. She recalls the ordeals she had to face initially when she was starting her career.

“During those initial days when we started patrolling, five boys in Princep Ghat were eve-teasing a woman. That lady came running to us and screamed loudly in protest. We immediately caught them and sent them to the local PS.” Kanika, a physics honours graduate, says women should protest rather than tolerating everything quietly.