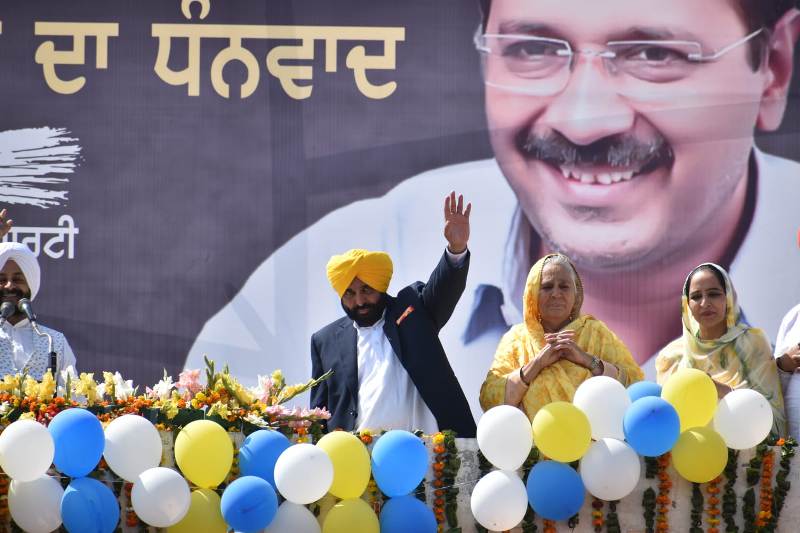 Dhuri: After the landslide win of the Aam Aadmi Party (AAP) in Punjab, chief minister-elect Bhagwant Mann on Thursday announced that he would not take the oath of office at Raj Bhawan. The ceremony would, instead, be held at Khatkarkalan in Nawanshahr district, the ancestral village of freedom fighter Bhagat Singh.

“The oath-taking ceremony will not be held at Raj Bhawan but at Khatkarkalan. The date will be announced later,” he said in his victory speech in Dhuri, where he won by over 58,000 votes.

The announcement drew a loud cheer from his supporters and crowd.

He also announced that government offices would not have the photo of the chief minister as is the custom.

“No government office will carry a picture of the chief minister. Instead, there will be pictures of Bhagat Singh and BR Ambedkar,” Mann announced.

AAP supremo and Delhi chief minister Arvind Kejriwal also urged people to join them, calling his party is one of “Inquilab” and belonging to Bhagat Singh.

Mann said his focus after taking office will be to improve schools, health, industry, making agriculture profitable, the safety of women, and improving sports infrastructure.

“You will start seeing the change in Punjab within one month,” he promised.

The Aam Aadmi Party (AAP) swept Punjab, winning 92 of 117 seats leaving the Congress with only 18.

Former chief minister and ex-Congress leader Captain Amarinder Singh fared no better after breaking up with the grand old outfit.

Punjab Congress chief Navjot Singh Sidhu, who too lost his seat, accepted his defeat in a tweet which reads, “The voice of the people is the voice of God …. Humbly accept the mandate of the people of Punjab …. Congratulations to Aap !!!”