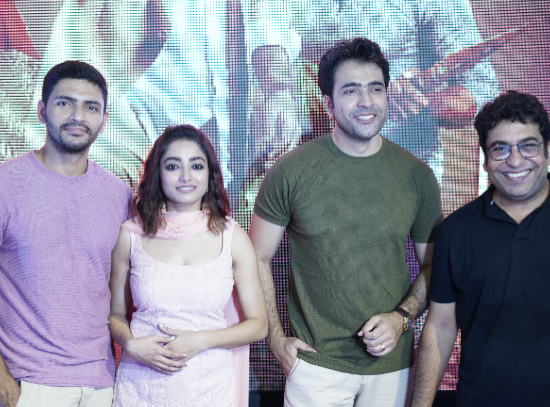 It’s not easy locking horns with the pan-Indian biggie Vikram Vedha starring Hrithik Roshan and Saif Ali Khan. The buzz around this single-screen pleaser is high and many expect the movie to open to strong numbers even surpassing Kartik Aaryan’s Bhool Bhulaiyaa 2. But then, back home the producers have always considered Durga Puja as the ‘pious’ time to release their best products. And barring a few occasions (including the obvious Covid-19), most producers have laughed their way to the box office.

SVF, Bengal’s most successful production house, always keeps their coveted film for Durga Puja. This year, it’s Dhrubo Banerjee’s Karnasubarner Guptodhon, the third film in their popular Guptodhon franchise to hit screens on puja. Starring Abir Chatterjee as Sonada, Arjun Chakraborty and Ishaa Saha, the Bengali film looks to win the box office on day one this puja. At least, that’s what the advance bookings indicate.

A day prior to the release, the Bengali film has sold more than 25,000 tickets. Now, that’s no mean feat for a regional film industry, where the number of screens keep shrinking each day. According to the production house, Karnasubarner Guptodhon has seen the “highest advance ticket sales since the release of any Bengali film ever”.  Given the film saw a strong start and experienced significant growth over the advance release week, the makers believe Karnasubarner Guptodhon box office performance will hold up well during its first week. Also, BookMyShow reveals among 131 shows of the Abir-starrer, 32 shows are sold out on day one in and around Kolkata.

Optimistic about the release of this much-awaited film, Shrikant Mohta, co-founder and director of SVF said, “The trailer of Karnasubarner Guptodhon has been so well received that I could feel the excitement of the audience to watch the film on the big screen. This is the first time in the Bengali industry we are seeing such a humongous advance booking within two days.”

Mohta also added the numbers are not only encouraging for them but also for the industry. “It has been a great thing not just for the film but for the Bengali entertainment industry as well. We are equally thrilled just as the audience,” he said.

Lead actor Abir took to Twitter to share that he is getting positive vibes about the film. “Few more hours to go and #KarnasubarnerGuptodhon will be all yours..If advance booking gives you early prediction, I am getting positive vibes from all corners..Here’s hoping you will love this adventure just like the last two..Or even more..,” the actor posted.

Few more hours to go and #KarnasubarnerGuptodhon will be all yours..
If advance booking gives you early prediction, I am getting positive vibes from all corners..Here's hoping you will love this adventure just like the last two..Or even more..#ShrikantMohta #PujoWithSonaDa pic.twitter.com/5KblBU31a7

In his debut film in 2018, Banerjee made a name for himself when he created a box office storm with Guptodhoner Sondhane. Having always been fascinated about Bengal’s culture and heritage, he wanted to narrate tales of unexplored history and treasures. His next film in the hit franchise Durgeshgorer Guptodhon in 2019 established him as a dependable director. Also, Sonada, a detective who wasn’t based on any literature, found a place in the heart of Bengali audiences.

In Karnasubarner Guptodhon, Sonada aka Abir will be seen unearthing the phenomenal treasure of the very genesis of Bengal, the treasure of King Shashank of the kingdom of Gour.

“Directing Karnasubarner Guptodhon felt like having a reunion with my old teammates with whom I had started the journey of making films. I have always tried to fascinate the audience with the stories hidden in the roots of Bengal. Sonada, Abir and Jhinuk have now become household names and I couldn’t be happier,” said Banerjee, who also directed the sports drama Golondaaj.

Arjun, who has his own fandom post Guptodhon series, said, “Karnasubarner Guptodhon is a gift to kids on puja and we really hope they enjoy it. The background of this spectacular story will continue to touch the memories of hidden treasure in Bengali history.
Karnasubarner Guptodhon will  be released worldwide on  September 30. It will be released across various parts of  Tezpur, Guwahati, Bengaluru, Delhi, Mumbai, Pune, Bhubaneshwar, Hyderabad, Noida, Jamshedpur, Ranchi and also in Canada. Meanwhile, it will reach the audience of UAE, USA, Australia, Netherlands on October 7, October 15 and October 23 respectively.