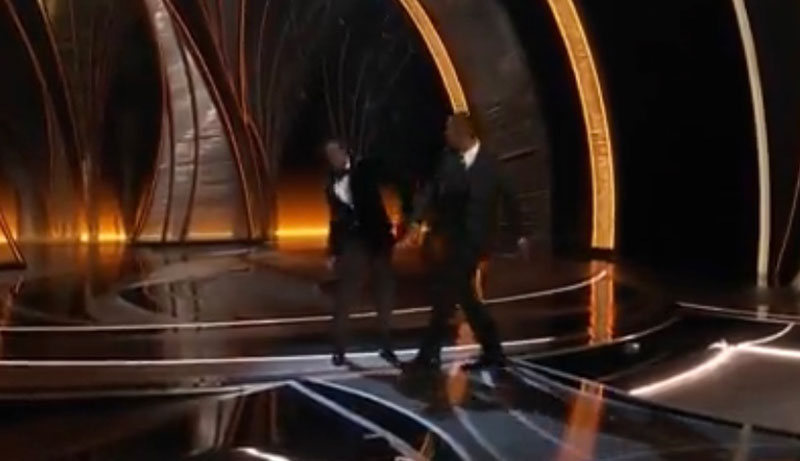 Los Angeles: The Academy has officially started a formal review of Will Smith’s onstage slapping of presenter Chris Rock at Sunday night’s Academy Awards. The incident sent a shock wave around the world and promises not to go quietly into the night, despite Smith’s onstage apology to the Academy, and later to Rock in a post on his Facebook and Instagram social media accounts.

According to hollywoodreporter.com, a full meeting of the Academy’s board of governors has been called for Wednesday evening, where the matter of Smith slapping presenter Rock onstage at the ceremony is expected to be topic number one.

The decision comes just hours after the officers of the Academy’s board of governors — including president David Rub and CEO Dawn Hudson — convened on Monday for an emergency phone call about the incident.

Shortly thereafter, the Academy issued a statement declaring: “The Academy condemns the actions of Mr. Smith at last night’s show. We have officially started a formal review around the incident and will explore further action and consequences in accordance with our Bylaws, Standards of Conduct and California law.”

The first post-Oscars board meeting always features a postmortem of the ceremony and addresses issues that arose during the show but does not usually happen this soon after the ceremony.

Some sanction of Smith is likely — perhaps a suspension of his Academy membership, as some members are calling for, but, in all likelihood, not the revocation of his best actor Oscar, as others would like to see. (Even Harvey Weinstein‘s and Roman Polanski‘s Oscars were never rescinded), The Hollywood Reporter says.

Whoopi Goldberg, a member of the board of governors, who is also an Oscar winner and former host, said on The View on Monday: “We’re not going to take that Oscar from him. There will be consequences, I’m sure, but I don’t think that’s what they’ll do.”

During Sunday night’s live telecast, Smith, in response to a joke aimed at his wife, Jada Pinkett Smith, walked onstage and slapped Rock in one of the most shocking moments in the history of the awards show. The comic made a GI Jane joke about Pinkett Smith, who has a shaved head (the actress has alopecia).

When Smith returned to his seat, a bemused Rock said to the audience: “Will Smith just smacked the shit out of me.” Once back in his seat, Smith yelled to Rock, “Keep my wife’s name out of your f*g mouth!”

When Rock responded with: “Wow, dude, it was a GI Jane joke”, Smith repeated himself.

Shortly thereafter, Smith was named best actor winner for King Richard, his first Oscar. He began his acceptance speech by apologizing to the Academy and his fellow nominees but did not mention Rock.

After the show, the Academy tweeted a statement, saying it “does not condone violence of any form.”

Smith and Rock attended separate after parties — with Smith saying it’s been a “beautiful night” while dancing at the Vanity Fair Oscar party. Rock was spotted at Guy Oseary’s after party. The Los Angeles Police Department confirmed that Rock declined to file a police report.

Producer Will Packer, taking to Twitter on Monday, called the moment “very painful moment for me. On many levels.”

According to variety.com, SAG-AFTRA, the union that represents actors like Smith and Rock, on Monday condemned the altercation.

“As the union representing presenters and other performers working on the Oscars, SAG-AFTRA is focused on ensuring our members always work in a safe environment,” the union said in a statement.

“Violence or physical abuse in the workplace is never appropriate and the union condemns any such conduct. The incident involving Will Smith and Chris Rock at last night’s Academy Awards was unacceptable. We have been in contact with the Academy of Motion Picture Arts and Sciences and ABC about this incident, and will work to ensure this behavior is appropriately addressed.”

The union did not comment on any pending disciplinary process involving its members.

Also read: I was wrong: Will Smith apologises to Chris Rock for slapping him onstage