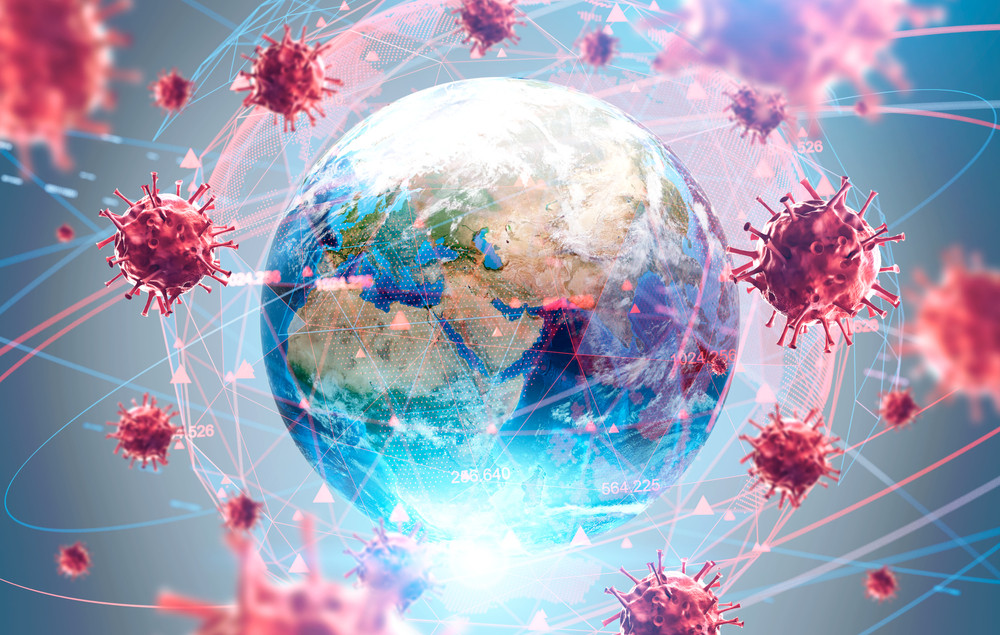 With China possibly losing its tag of the preferred manufacturing hub for its poor response to the Coronavirus outbreak, as many as 1,000 foreign companies are engaged in discussions at various levels with the Indian authorities to shift base. Clearly, the government is seeing an opportunity here and is going all-out to hard-sell India as the next manufacturing nerve centre, writes Ritwik Mukherjee

In throes of an unprecedented global pandemic, FY21 has begun on a lacklustre note with India as well as several world economies in an extended lockdown. This has impacted the underlying demand/supply dynamics and is expected to have an adverse impact on the economy and corporate earnings. India Inc has been working from home for over 30 days now due to the pan-India lockdown enforced by the government as a precautionary measure to curb the spread of COVID-19. When a population of 1.3 billion is locked down in their homes, various implications are bound to occur. And you don’t need any rocket science to understand that.

However, as Henry Ford said: “When everything seems to be going against you, remember that the aeroplane takes off against the wind, not with it,” with adversity comes an opportunity.

And in what appears to be early signs of possible changes in global geopolitics, US President Donald Trump has questioned China over its response to the outbreak of the deadly virus. China may have strongly protested Trump’s “China virus” remark but the American President has been lashing out at the country unabated. And Trump’s statement has triggered speculations over China possibly losing its tag of preferred manufacturing hub following the Coronavirus outbreak.

Facts first. As many as 1,000 foreign companies are engaged in discussions at various levels with the Indian authorities. At least 300 of these companies are actively pursuing production plans in sectors such as mobiles, electronics, medical devices, textiles and synthetic fabric if senior government officials are to be believed. Many countries including Japan, the US and South Korea are over-dependent on China and it is now very apparent that companies from these countries would see India as an alternate manufacturing hub. Whether this will fructify and the dream will get translated into action, given that the production cost difference between India and South-East Asian countries is about 10-12 per cent, remains to be seen but the opportunity has come and the Centre is making an all-out attempt to hard-sell India as a manufacturing hub.

There are many MSMEs who manufacture top quality products and are able to compete with China on price points. This is a serious chance for India to become the contract manufacturer of the world.

While this has certainly thrown up enormous opportunities for India, for someone like Vinay Paranjpe, executive director, Dubai-headquartered UMC, the real opportunity in India would now come from ‘Rural Bharat’.

“In reality, rural India is largely untouched by most MNCs and yet it operates quite well! It is only now that many parts are getting accessed thus, creating small ‘sustainable cells’ out of existing villages will be a brilliant option. We would be underestimating the intelligence of the rural population or ‘village folks’, if we feel that they were not capable of creating business models which would support their own lot,” says Paranjpe, who moved out of India almost three decades ago.

“I would not be too much bothered about how the stock market performs and how much of FDI happens in the next few months — the indicator will be how much hunger do our small entrepreneurs have. When people look at an economy such as India with “western” perspective — they only see gloom. However, those are probably incorrect lenses to view or study the Indian economy. One would assume that the small entrepreneurs really make the economy work and their hunger will determine how quickly India will bounce back,” he adds.

With his business spread well across 37 countries, the UMC top brass minces no word in saying that the small and medium scale industries must crank up their production and find new ways to distribute their produce to areas where they had not read before — all within the country! One can see so many new opportunities in just the service sector, surely there will be so many more in other sectors too! Indians as a rule are very good at spotting opportunities. And a true entrepreneur is that who is able to spot an opportunity in adversity!

And this optimism comes at a time when according to the latest report from Kantar, the world’s leading data, insights and consulting company, suggests that 79 per cent of the MSMEs are negatively impacted by COVID-19 crisis, only 24 per cent MSMEs are operational now, of which 18 per cent are operating at less than 50 per cent capacity, restricted movements, low demand from customers, financial and workforce woes are leading to a high level of customer-oriented challenges. The Kantar report also suggests that 7 out of 10 businesses have witnessed a significant decline in customer footfalls/enquiries, 5 out of 10 businesses would run out of their working capital within two months — they will depend on loans from peers/friends/family to survive, 7 out of 10 manufacturing businesses are unlikely to procure raw materials for the next one month,6 out of 10 businesses are uncertain about their business financial health for next two weeks — 9 out 100 businesses are expected to lose 100 per cent of their revenue during the next two weeks or so.

These apparently gloomy facts and figures notwithstanding, senses of optimism are still pouring in. Rohit Dubepatil, director, Sengee Biochem EXIM Private Limited, for one, strongly feels that there will be more opportunities in niche segments which MSMEs can cater to.

“Although the economic losses sound that there is a drastic reduction in discretionary spending power when it comes to health, there will not be second thoughts on spending. With a drastic change in shopping habits that is bound to happen before restoring normalcy, food companies will have the biggest opportunity to deliver the promise of being responsible brands. Food MSMEs are already in the thought process of proving the service of wellness along with food which clearly means that innovative minds are on their job. Now, this is one single front which will dole us out-innovating to deliver value,” says Dubepatil.

He adds: “The lockdown has induced healthy eating habits’ growth tremendously. People are now using olive oil instead of vegetable/mixed oils to cook traditional Indian meals, consuming fewer sugars and fats; and indulging in foods which offer more vitamins, minerals, proteins, etc. Immunity boosting food products will also be in high demand. What we will see is a rise in the nutraceuticals industry altogether, as consumers’ preferences are drifting away from consuming pharmaceutical products due to their side effects.”

He points out that Indian minds have always been at the forefront of tech and pharma innovation. Innovation mainly in the “digital space” and Medtech will help harness the true potential of India. Companies, big and small, will not only benefit from this but will have the opportunity to become trendsetters globally.

Dr Ajit Ranade, Chief Economist of the Aditya Birla Group also subscribes to similar views. “Sectors like healthcare and pharma will become more prominent. In India, public health spending will go up considerably and many new ways of conducting business will come up,” he says.

There will be new opportunities for a new realm of Indo-US trade and economic collaborations in these areas. “The methods of wealth creation for a nation have evolved from conquering to colonisation to cartels to the competition. The way forward now is collaboration. Here, India and the US are perfect partners,” said Naushad Panjwani, regional president, IACC West India Council.

Any discourse on resetting the Indian economy would not be meaningful without a focus on the retail sector. The retail industry employs about 46 million people, which sustains the livelihood of 250 million Indians. Food and essentials contribute to around 50 per cent of the total; non-essentials contribute to the other 50 per cent. Not opening non-essentials can have a serious impact on 20-25 million employees and 125 million Indians working in non-essential retail and millions of other Indians working in the total supply chain from manufacturing to logistics, wholesale and retail. India is all about consumption and retail is a gateway to consumption.

“The key to resetting the economy is to get cash generation going. Exports will not be a silver bullet for India. Driving domestic consumption in a safe way is going to be important. A large part of retail is based on non-essential items; we must revive that, even as we continue providing for essentials. The industry will need handholding in the form of financial support for around 6-9 months to emerge from the crisis. The key thing is to ensure safe shopping and modern retail is in an excellent position to do that. Malls can have the best standard operating procedures to ensure social distancing; they can be the safest way to shop. To enable all of this, the government and the industry must partner closely with each other,” said Kulin Lalbhai, executive director, Arvind Limited.

Little wonder, therefore, that the Retailers Association of India (RAI) has sought support from the government in the form of working capital equivalent for at least 2-3 months of revenue to pay salaries to its employees, and a moratorium of up to 9 months on payment of loans. By further opening up retail will boost consumption in the country.

It is not just the retail sector, industry across verticals and sizes are looking forward to some strong financial and otherwise support from the government. “Having said everything, the financial stimulus at the sovereign level will have to come in handy for organisations. It will be important to see the government doling out a handsome stimulus to the tune of 4-5 per cent of the GDP to steadfast the recovery,” says Dubepatil.

Paranjpe adds: “As a nation, we went through a 1,000 years of oppression and foreign occupation which we survived. If anything, it honed the survival instincts already present in our genetic make-up. This innate survival instinct, which looks crazy from other perspectives, will help us in such times. The population which many feel is a burden is the very factor which makes our economy self-sustainable and reasonably independent of foreign influences even in today’s world.”

“When going gets tough, the tough get going,” so they say and it’s time Indian economy proves how tough and strong it is.