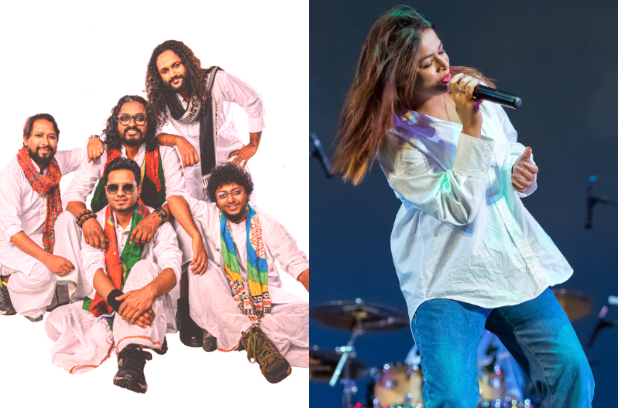 Live shows were hit the hardest by the Covid-19 pandemic. And the musicians became the biggest casualties. As more and more people started to self-isolate during the pandemic, musicians resorted online to stream gigs. But everyone missed the excitement, the energy of live performances. For Bengali musicians, Durga Puja is the season of artistic performances. Given the celebrations were muted for two years due to Covid-19, the musicians had a lackluster season.

Cut to 2022 and the musicians from Bengal are returning to perform in various parts of the world for Durga Puja celebration. GIMA award winner Bickram Ghosh is in England now for his ONEWORLD Concert. Along with Ghosh, popular percussionist Suresh Vaidyanathan, drummer Asaf Sirkis, flutist Aura Ruscan and saxophonist Jesse Bannister are also part of the ONEWORLD Concert. Recently, the group performed in Amsterdam. 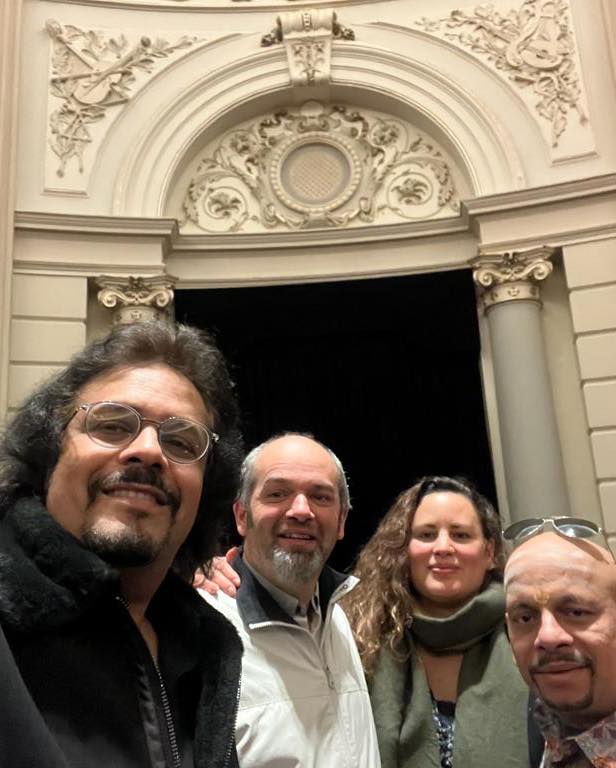 Good times are back

Meanwhile, a bunch of musicians have travelled to the US to regale the Prabashi Bengalis. From Iman Chakraborty, Sourendro-Soumyojit, Somlata Acharya to Shovan Ganguly, many other prominent artists are all set to entertain the US-based Bengalis, who host the biggest Durga Pujas.

From the East Coast to the West, Iman and her group crisscrossed this huge nation to perform at Durga Pujas this weekend. Her first stop was Uttoron’s Puja in Seattle. In America, Durga Puja celebrations start in Mahalaya week. The communities, too, are thrilled to celebrate Durga Puja in a grand way after two long years. Iman’s concert is one of the first puja concerts in the US this year.

In fact, Iman kicked off her US Tour with her performance at the Bangladesh Immigrant Day celebrations. On September 25, 1974, Sheikh Mujibur Rahman addressed the United Nations in Bengali. In 2018, New York State designated September 25 as Bangladeshi Immigrant Day. This was the fifth year of this event and the National Award-winning singer performed on the opening night.

In the heart of New York City, amidst the razzle dazzle of Times Square, Iman and Team Togetherness rocked the banquet hall of NY Marriott Marquis. Hundreds of Bengalis from Bangladesh attended the event and cherished her renditions of Tagore and folk. But it was her hits, Rangabati, Tapa Tini and Tumi Jake Bhalobasho that rocked the NY Bengalis.
“I am overwhelmed by the love from prabasi Bengalis. I want to thank Jonai Singh and JS Events who have been the pillar of my US Durga Puja concert series since my debut in 2014. This is the first time that we performed in the heart of Manhattan and this experience will remain memorable,” said the Bela Shuru and Praktan singer. Iman and her group will be touring for three weeks in the US. 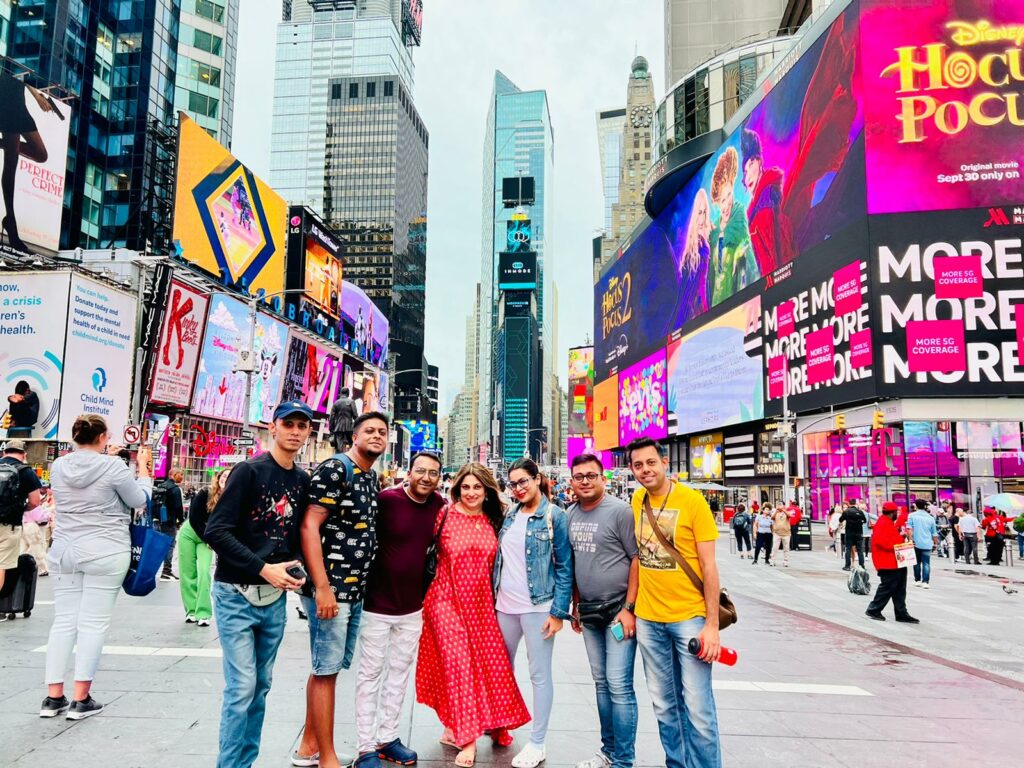 Enthusiasm among artists and organizers

Meanwhile, Jonai Singh is elated that things have returned to normal. “We are witnessing great excitement and enthusiasm, in both the artist groups as well as the hosting communities during the puja tours,” said Singh, who has been at the forefront of South Asían artist representation for over a decade. In fact, she is known to have introduced, for the first time, many Bengali artists in the USA, such as The Anupam Roy Band, Iman, Shovan, Somlata and The Aces, Lagnajita Chakraborty and many others.

This year, the artists have been invited by some of the biggest Pujas of the USA in New York, New Jersey, Boston, Chicago, Los Angeles, Bay Area and others. They are also performing in smaller communities like Cincinnati, Columbus, Detroit, Kansas City, Philadelphia, Phoenix, etc.

“In 2020, when Durga Puja celebrations were stalled in every part of the world, we brought “Maa Durga” to individual prabasi homes, from New Zealand to the UK, USA and others. Our “Pujor Jalsa” conceptualized and directed by Sourendro and Soumyojit, kept Bengali emotions alive during the toughest times,” said Singh.

She remembered how the Covid-19 pandemic took a huge toll on the live musical and other such performances. The travel restrictions and lack of visa processing, prevented international artists traveling to the USA, even in 2021. “Hence communities from Seattle, Charlotte, New Jersey to Los Angeles/Bay Area are rejoicing the return of international artists to their pujas,” she said.

Ranjana Ami Ar Ashbona singer Somlata Acharya remembered how they were in the US in February 2020 and soon after the pandemic set in. “Now, the whole band is pretty excited to return to the US after two years. We have six shows altogether,” she said. Shovan Ganguly is thankful to the organizers who have planned the shows post pandemic. “Since the year I started performing live, I have visited the US with Jonai Singh. I am thankful to all the organizers who have planned musical events after a gap of two years. Hope we will have some memorable puja days this year,” he said.

Bengal’s popular band Fakira will be performing in various parts of the US including Delaware, Michigan, Texas, Georgia, New Jersey, Massachusetts and California.

Celebration in Nairobi
For Ananya Pal and her team, even though she lives in Nairobi, this year is special as UNESCO has recognized Durga Puja as Cultural Heritage. Before the puja countdown had started, she had organized a show based on Indian history named ‘The Ethereal Saga’ at Muthaiga Country Club in Nairobi. A dance-drama based on the romantic story of Poet Jayadev and Padmavati and the making of Geet Govindam, Ashish Chakraborty was in-charge of the music and songs. On Mahalaya, Ananya also performed on the virtual show ‘Agamani – The Divine Arrival’ on Mahalaya. 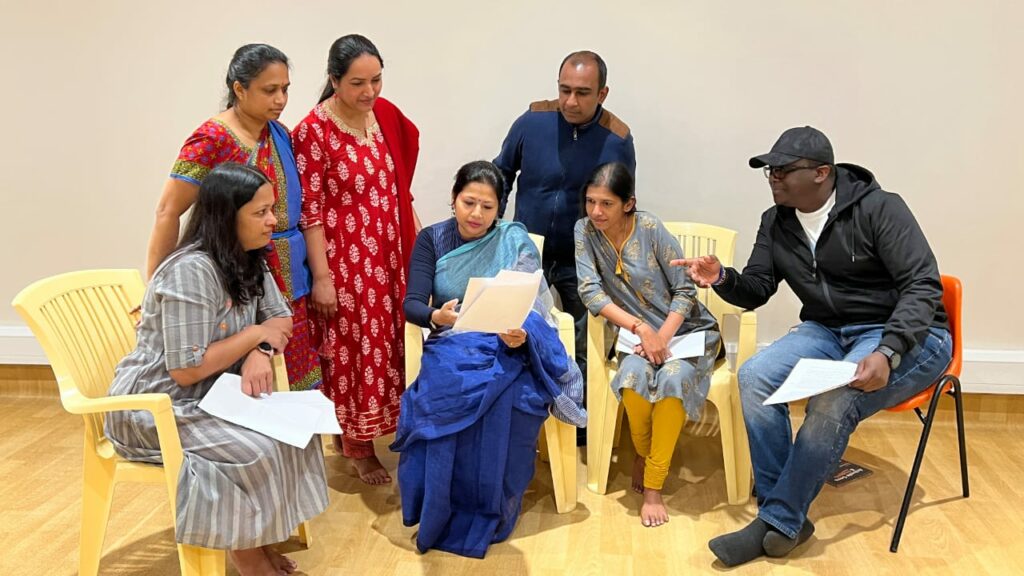