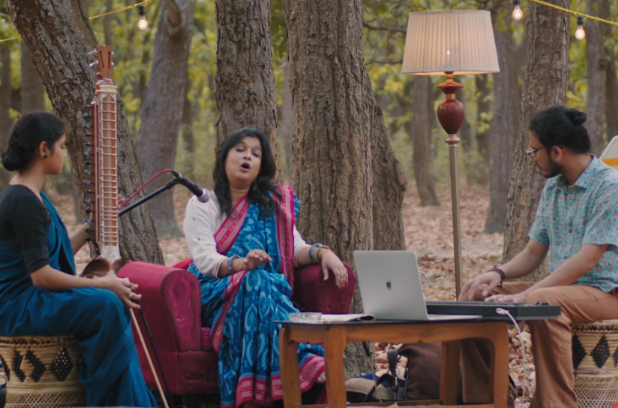 It wouldn’t be an exaggeration if we say singer Sahana Bajpaie has been truly instrumental in bringing the young generation close to Rabindra Sangeet. With guitars, and keyboards, she revolutionized Tagore songs and made them more “palatable” for Gen Z. In this endeavour, she had an able partner with her always — Samantak Sinha, who sometimes sang with her and mostly arranged and produced the music.

On Thursday, Sahana’s latest Rabindra Sangeet Pothe Chole Jete Jete was released by SVF Music. The song captures the anguish of a traveller in search of the divine touch. What’s even more beautiful is the setting of the song, which has been shot in Tagore’s beloved Shantiniketan.

The visual ambience of Pothe Chole Jete Jete adds a rural relevance, which presents a perfect blend of contemporary and vintage flavour to the newly arranged song.

Just like in case of Rajanikanta Sen’s evergreen song Preme Jol Hoye Jao, which released on Bengali New Year, Tagore’s Maarer Shagor or Moloyo Batashe released during Durga Puja in 2017, Pothe Chole Jete Jete has been arranged by Samantak. He has also sung the track with Sahana Bajpaie, adding a charm of serenity.

Sahana, who has collaborated with SVF time and again, praises the label for doing exemplary work in the field of music. “In the past, we have collaborated on songs like Moloy Batashe, and Prochondo Gorjoney, which music lovers have appreciated a lot. I sincerely hope that people will love our latest song as well,” said the Maharajo Eki Saje singer from Ek Je Chhilo Raja.

Meanwhile, their duet — Baaynabilashi — from Srijit Mukherji’s latest release X= Prem is a raging hit among the young listeners.