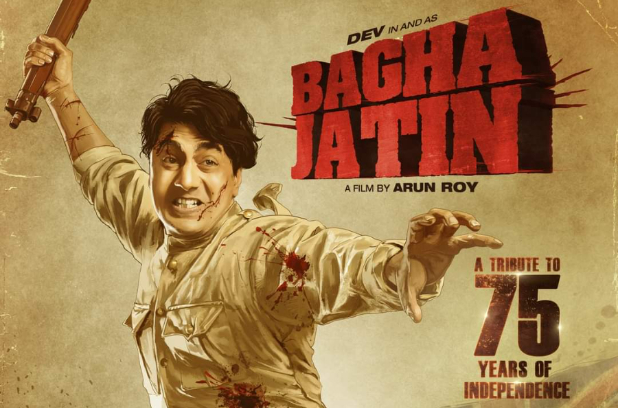 When director Dhrubo Banerjee made the sports drama Golondaaj based on the life of Nagendra Prasad Sarbadhikari, he had mentioned how he found uncanny similarities between the father of Indian football Nagendra Prasad and Dev. Director Arun Roy echoes similar sentiments when he thought of making Bagha Jatin, a historical film on the revolutionary freedom fighter.

Roy is known for making historical and periodic Bengali films. His earlier films be it Egaro, Hiralal or 8/12 Binay Badal Dinesh have all been appreciated for their content and presentation. But Roy has always preferred working with lesser-known artistes and theatre actors. This is for the first time, he had approached a superstar and that, too, Dev. In fact, Dev is also the producer of the film.

For the past one-and-half-year, Dev and Roy have been discussing Bagha Jatin. In fact, the director wasn’t sure about filming the legendary scenes of Bagha Jatin fighting a tiger. He knew a lot of heavy VFX was needed. But Roy couldn’t see anyone but Dev as Bagha Jatin. “There’s a lot of similarities between Dev and Bagha Jatin. He is tall and well-built like Bagha Jatin. Also, Bagha Jatin was into wrestling and boxing. Is there anyone who can do this character convincingly but Dev?,” asked Roy. The film will also narrate tales of other revolutionary freedom fighters like Rashbehari Bose, Aurobindo Ghosh, and Barin Ghosh.

On Independence Day, Dev took to his social media handle to share the first look of the film. “On the auspicious day of celebrating 75 years of Independence, our humble tribute to the legendary freedom fighter “Baghajatin”. Presenting the official poster of our upcoming movie #Baghajatin,” Dev posted.

Also read: That I could pull off a role like Aparajito Ray was not believable to many: Jeetu Kamal

Born as Jatindranath Mukhopadhyay on December 7, 1879, he came to be called ‘Bagha Jatin’ after killing a tiger. Since Dev has a lot of similarities with the freedom fighter, the director believes he would need less prosthetics. Somnath Kundu, who did prosthetics of Jeetu Kamal in Anik Dutta’s Aparajito, will take care of Dev’s makeup in the film too. Nilayan Chatterjee of Kishmish fame will helm the music department. Bagha Jatin is expected to go on floors in November in Kolkata.

Meanwhile, Dev’s fans are excited after the superstar made the announcement.

Here you go and let me tell you this looks so epic @idevadhikari . Can't wait for this one.#baghajatin https://t.co/XrcgXzGNfe

Looking forward to another masterpiece by #Dev & his team @DEV_PvtLtd. pic.twitter.com/J7g4sbkgTP

As a producer-actor, Dev is currently on a high. His recent release Kishmish with Rukmini Maitra had a successful 100-day run at the box office. The actor has a day or two left for the shooting of Projapoti with Mithun Chakraborty. On Durga Puja, he unites with Prosenjit Chatterjee for the first time for Kacher Manush.