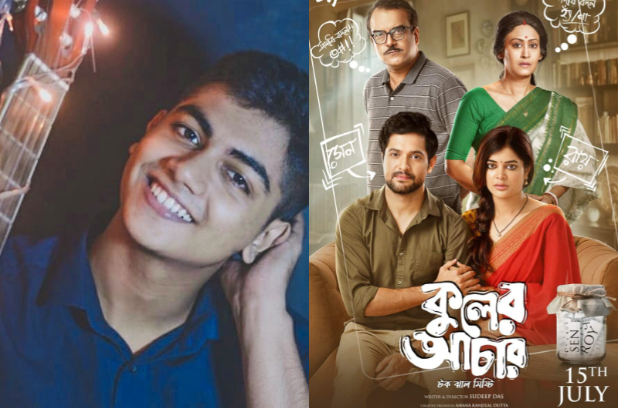 Even if you have not fallen in love during college, you’ll feel like you have after listening to Takey Olpo Kachhe Dakchhi from Anindya Chattopadhyay’s 2021 Bengali film Prem Tame. The song with the fresh vocals of Mahtim Shakib and tender lyrics of Shibabrata Biswas will soothe your romantic soul.

Mahtim is a young singing sensation in our neighbouring country Bangladesh. And in his musical debut in Bengali films, he won our hearts with the balmy Takey Olpo Kachhe Dakchhi. So it didn’t come as a surprise when SVF recorded another soothing track with the Bangladeshi singer. This time, it was for director Sudeep Das’ family drama Kuler Achaar. Starring Vikram Chatterjee and Madhumita Sarcar, the Bengali film will hit theatres on July 15.

Titled Bhul Koreche Bhul, Mahtim is joined by the talented Madhubanti Bagchi in the first song of Kuler Achaar. When Prasener Dolbol is in charge of the composition and lyrics, you know the song is worth listening to.

Kuler Achaar is about a young woman, Mithi, who doesn’t want to change her maiden name after marriage. As the title of the song suggests, Bhul Koreche Bhul is packed with emotions and shows how a tiff between a husband (Vikram) and wife (Madhumita) makes both suffer.

Mahtim is delighted to have got the opportunity to sing alongside Madhubanti. “The song is so beautifully composed and written that it gave me different energy while I sang it. Bhul Koreche Bhul will undoubtedly be a treat to the audiences who are fond of melodious and soothing tracks,” he said.

Madhumita, who impressed one and all with her performance in Cheeni, said, “I fell in love with this song.  The voice is soothing and emotional… it’s just the perfect blend.”