All-Blind musical band from Meghalaya lights up the world 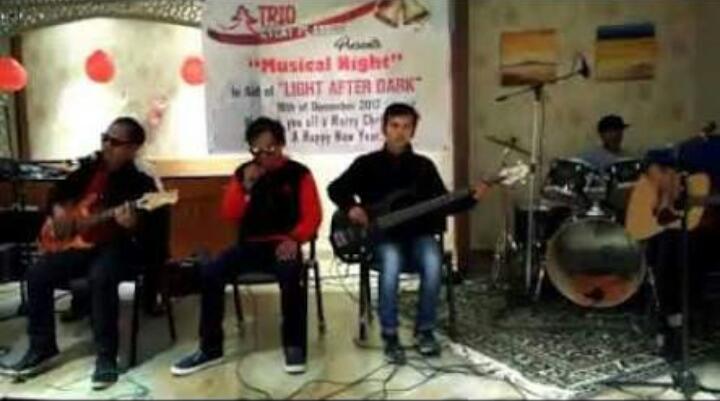 Being a musician is a complex endeavour for anyone and it is impossible not to admit that born visually impaired simply puts a few more stumbling blocks in one’s path. Some people achieve so much, despite the odds, that they inspire those around them. Meet 25 year old Hilter Khongshai, a visually impaired percussionist who is one of those inspiring people around him. A graduate with history honours from the prestigious St.Edmunds college, Shillong is now planning to do his Masters as he believes, “Education gives us an understanding of the world around us and offers us an opportunity to use that knowledge wisely.”

I graduated in history honours last year from St.Edmund’s college and now I want to do my Masters. I want to be a teacher, I want to teach my students history. At the same time I want to be a good drummer. I practice on my own and no one taught me drums, but it was my interest in playing the drums that I started playing it.” Says Khongshai.

Clapping out the beat, everything he did, he did to the best of his ability, despite the odds. Being visually impaired did not stop him from achieving the vision in his mind, one of playing the drums which was more than music to his ears. It was music to his soul. He had that kind of moral fortitude people want everyone to have. Kongshai inspired everyone. But life was not that easy.

The first time he tried to play the drums, he ended up hurting himself. Bleeding red in blood, Khongshai developed a never give up attitude and practiced more. Today he is a successful percussionist and the heart of his band ‘light after dark’, for that is what his musical journey truly symbolizes.

“Before touching the drums I used to listen to the songs and move my feet to the beat. My senior from Jyoti Shrot school where I studied, was a drummer. When he played with his band, he asked me to sit with him. He was the first person who gave me chance to touch drums. From that time on, I practice hard and automatically I learnt.” Says Khongshai.

“The first time I played the drums I hurt myself, because sometimes I hit the side of the drum which is very dangerous.  It is a hard knock as sometimes the drum has a metal side, so when I hit the drum, I hurt myself. I even ended up with bleeding hands. With practice now I know which one is where. Mostly, my hands were hurt.” He says while recollecting his experience when he learnt to play the drums.

Due to the Covid crisis and also two and a half month lockdown now, it has been a hard time for Khonghai. “I really want to practice, because if we practice, we learn more. So what I did is, last week when the lockdown was eased, I got the drums from our mentor. I felt bored during the lockdown as I couldn’t practice and was sitting at home idle. If this situation continued, I thought of taking classes for children. I will teach them drums atleast and that way earn while being at home too.” Says the optimistic drummer.

They can light up the dark with their music, though they continue to live in the dark. The band effortlessly interweaves modern and traditional music which has made it one of the favourites in Shillong. Setting examples of Beethoven, Christy Brown, Stephen Hawkings and Stevie Wonders who defied all odds and rationale on their way to the pinnacle of greatness, a troupe of visually impaired musicians are hitting the right notes in this hill state of Meghalaya, as they became the talk of the town.

‘Light After Dark’, a musical band of four performers in their 20s, has been receiving rave reviews for it’s shows, not just in Meghalaya, but elsewhere in the region too. . Sailo, a music teacher is the group’s mentor. The band comprises of five members, four of whom are former students of Jyoti Sroat School, Bethany Society. These young and vibrant musicians hail from different regions of Meghalaya.

The boys, who initially played for a school band, got together in 2013 to form the band with four members. Wanlamphrang is the vocalist, Rimiki Pajuh the lead guitarist, Dilbertstar Lyngdoh the bassist and Hilter Khongshai the drummer.

Playing as a school band since 2007, they gradually evolved and emerged as an independent music band in the year 2013, playing for events outside of school, with the name ‘Light After Dark’ which is symbol of perpetual hope. ‘Light After Dark’ has been acknowledged for their bourgeoning musical prowess across Meghalaya and consequently other parts of the nation. Undeterred by their disabilities, these musicians are a living embodiment of the notion of “Life Without Limits”. They were also selected as the state icon in 2019. Peter C Lalrinmawia has joined the group recently as manager.

Although, the band has achieved greater heights, the main crisis it is facing today is due to the COVID-19 pandemic and lockdown. Being a band of visually impaired people, today it is facing a severe challenge. The challenge to survive and revive, although, the phases of unlocking the nation has begun, for the band members maintaining the social distance norm is not easy and they have become venerable to the situation.  Moreover, life is still the same now as the band members are facing hardship due to existing situation and their earnings have decreased.

As far as the band is concerned, it is an all blind band. The name of the band is ‘Light After Dark’ and now as it is all dark during the lockdown as it is not the way it used to be. “Everything is different now, you have to cover your face, even if you cough a bit people look at you. We never dreamt this is going to happen, but we feel as a band, ‘Light After Dark’ is about believing there is always a ray of hope in front of us and the only thing is, that we need to stay together, put up a show of togetherness and fight together. We want to do a lot of things for the people in quarantine but my boys being blind cannot protect themselves, they will not know how to maintain social distance as the boys are staying with their families.” Says Khongshai while explaining the vulnerability of the situation.

“The COVID-19 crisis is affecting my boys especially, because as for me I can see and go to the market by myself. However, my boys have to take more precautions because once they are at home they need someone to go do the marketing for them. Earlier they were staying alone in rented house, but right now they have to be with their parents, they have to stay at home. Their parents have to protect them and during the covid crisis we can’t practice. If the covid crisis still going on for a longer time, we have to find a way to meet.”

The boys will have to go to Shillong, as some of them are staying in their own villages. The band will have to look at a way to meet up and stay in one place to start practicing.  That is the determination and passion for music for these band of boys. Meanwhile, Khongshai creates music and sends it to the other band members and they practice at their own place.

Defying Constraints Is All About Grit

Defying bodily constraints with their unflinching grit and driven by the searing desire to establish a career in music, they envisage themselves to be defined by their ability rather than disability. Thereby, they demonstrate to the world that an eclectic blend of passion and determination is not insurmountable despite the hurdles along the path to success. They also got a chance to open for the biggest TEDx talk show in India on the 10th of sept 2019 at Hyderabad, during which the band got a standing ovation. They played for Sreeram who was the winner of the reality television show on singing ‘Indian Idol’ 5.

However despite their brilliance, they are currently encountering a few challenges ranging from unavailability of personal instruments, financial constraints owing to their modest and humble backgrounds, dearth of ample opportunities and exposure which are impeding their prospects. Not to forget the decreased earnings during the lockdown. Contrarily though, the resilient band is still fighting tooth and nail with limited available ammunition, to combat and dispel any lurking darkness.

These tenacious artists may have lost their sight, but the vision in their minds are still intact and they certainly are aligned to making those visions a reality. There is hope that these prodigious stars shine like a beacon and enlighten the world with their characteristic luminosity.

Amidst the COVID-19 crisis, social media is flooded with policemen and various organisations singing for people locked up in their homes. The musical relief by various organisations and police departments aim to amplify efforts to stay optimistic while staying indoors and create awareness among people on safety during the pandemic. At times of great challenge, music helps to uplift the spirits of people. Music helps to heal. The band’s mentor Zoma Sailo believes, it changes the mood of people and helps to destress.

“Music changes emotionally, it can uplift us and it can heal. Now the time for music has come, when people know music can change the mood of a person. People who are quarantined cannot go out and music helps the, heal them bring them out of their sadness.”

Let the music play, let the hearts light up, let the souls ignite. For hope leads the way to the light after dark.