Amid the verdant tea-growing mountains of Ooty 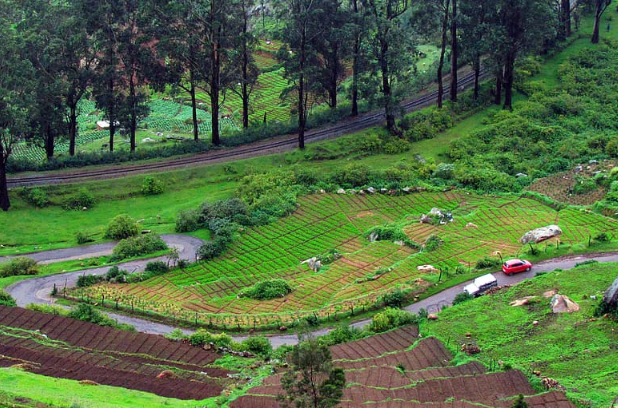 Most commonly known as the ‘Queen of Hills’, Ooty or Udhagamandalam presents pristine green stretches of tea plantations, breathtaking views of valleys, providing a perfect break from the steaming plains amid tall pine trees.

The cool allure of Ooty drew the British colonialists in the early 19th century to the place, making it the summer headquarters of the Madras government. The charm continues to this day and even during the monsoon, this place is buzzing. It’s all lush and green with waterfalls and dams gushing and full to the brim as rains bless the Nilgiris.

Established in 1848, the Botanical Garden is a 55-hectare stretch on the lower slopes of the Doddabetta peak and a living gallery of the Nilgiris’ natural flora. Watch out for a fossilized tree trunk believed to be 20 million years old amid the rose garden, terraced flower beds, natural ponds and glass houses.

Pykara is a village and the river is located almost 19 km from Ooty. A boat house on the Pykara reservoir is an added attraction. Motor boats providing 20-minute rides are also available. Pykara waterfalls flows through Murkurti, Pykara and Glen Morgan dams. A forest rest house in Pykara draws a lot of tourists every year for its stunning scenic beauty.

About 68 km from Ooty, lies the famous Mudumalai Tiger Reserve, straddling the Ooty-Mysore interstate national highway. Located at the tri-junction of three states — Karnataka, Kerala and Tamil Nadu, it plays a unique role by forming part of the Nilgiris Biosphere Reserve, the first one in India, declared in 1986. It has a common boundary with Wayanad Wildlife Sanctuary (Kerala) on the West, Bandipur Tiger Reserve (Karnataka) on the North, the Nilgiris North Division on the South and East and Gudalur Forest Division on the South West, together forming a large conservation landscape for flagship species such as tiger and Asian elephant. Mudumalai — the ancient hill range — is clearly as old as 65 million years when the Western Ghats were formed.

Also read: Strawberries of Kerala are a sweet surprise for travellers

It is also a haven for the Indian gaur, panther, sambar, spotted deer, barking deer, common langur, Malabar giant squirrel, and jungle cat among others. This reserve also has a wide variety of more than 260 species of birds, including rare ones like Malabar grey hornbill, Malabar pied hornbill, Malabar laughing thrush, frog mouths and a variety of woodpeckers. Malabar whistling thrush, peacocks and jungle fowls are the other important bird species found here.

Manjoor is perfect for a bike trip from Ooty. Situated at the border of Kerala and Tamil Nadu, along the fringes of Silent Valley National Park, this narrow stretch is exceptionally exciting with elephants giving you company at night.

For shopping, the main market is a great option. Tourists can’t help but get drawn to the aroma of freshly baked cookies and hand-made chocolates while the Nilgiri cheese is the current flavour of the quiet, blue hills.

Long before ‘Make in India’ became a catchphrase, Needle Industries, a company from Studley in the UK, chose to invest and manufacture in India in 1949. Oddly, it did so after Independence, when the country was barely two years old, and most Englishmen had left the country. The company decided to set up its plant 7,000 feet above sea level near Ooty. This had nothing to do with the British proclivity to head for the cooler climes but rather, it was a decision dictated by the product it wanted to make: the gramophone needle.

Ooty is famous as the summer capital of the Raj and preferred by film directors for its scenic backdrops. That’s the reason why it’s heavily visited throughout the year, even during the monsoon. In this classic hill station, it is thus, best to take it easy and soak in nature, savouring the comforting sense of being away from the teaming millions and watching the ‘green woods laugh with the voice of joy’.