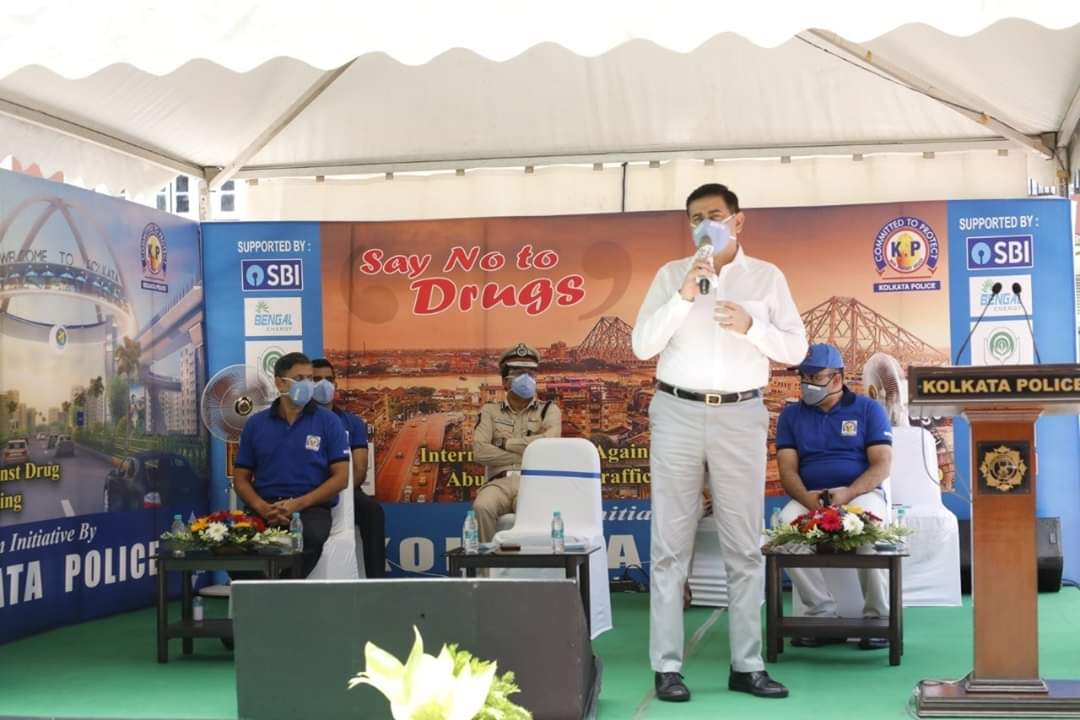 “If you can quit for a day, you can quit for a lifetime,” – is an oft quoted line by award-winning American poet, novelist and writer, Benjamin Alire Saenz. Quitting is not easy, but then neither is life. Drug abuse, which kills many every day, is a very unsettling reality the world faces today. Each day, India itself records 10 suicides due to drug-abuse.

The drug trade thrives clandestinely all over the world. While it is imperative to nab the drug peddlers and addicts, what is even more essential is to set up proper rehabilitation centres to bring the addicts out of the noxious trap of addiction and give them an opportunity to live a life of dignity. Although the abusers intake drug in their body, the abuse ramifies itself in epic proportions through massive psychological and mental damage. Awareness on this fact needs to be built comprehensively, before bringing to book the drug addicts and sellers. Upholding this idea of greater good, Kolkata police along with its associates, undertake an awareness building endeavor on Anti Drug Day (June 26), and publicize the grim realities behind drug abuse.

According to DC STF Murlidhar Sharma the rate of drug addicts and sellers in Kolkata is low and very much under control. Cases are mostly limited to the remote areas and mofussils. “Our experience saysthat there are two distinct groups of drug addicts. One belongs to the rich and wealthy section of the society who consumes drugs in order to get high. The other group is from the lower strata who belongs to poor families and fall prey to the vicious cycle of drugs. They are the ones who often consume drugs and commit crimes. This has become a disturbing pattern now. Addicts from this group often get into drugs due to peer pressure or as a result of some bad influence. However, over the years we have identified the pockets and monitor them regularly,” shares DC STF Sharma.

Say No To Drugs

Kolkata Police has a reformatory programme called the ‘Shuddhi Initiative’, which is specifically designed to target the hard core drug addicts. According to DC Murlidhar, it is difficult to bring the addicts back to track but through our Shuddhi programme we have been able to bring a number of drug abusers back to the mainstream society. “Our first and foremost focus is to arrest drug sellers and put them behind the bar, that done, we shift our focus to the victims who fall prey to these people. Through Shuddhi we rescue drug addicts and keep them in our rehabilitation camps for 6-7 months. A proper detox treatment, medicines and other types of treatments follow to help the addicts gradually recover. Once they convalesce fully, we send them back to the mainstream society, and provide them with livelihoods so that they can lead a normal and dignified life. This is what we call ‘a recovery process’ for the victims. Till date we have rescued 200 drug addicts out of which 150 have been mainstreamed, while rest are undergoing treatment. We are glad to be able to spread awareness and help the addicts live a better life,” he elaborates.

According to people in the know, the most important phase for drug addicts is the recovery stage, as it is during this time, that they are extremely vulnerable. At times like these, it is important for them to have family support and close friends who can help them get back on the right track. Otherwise the victims often lose hope and go back to the abuse cycle again.

Every drug addict has a humane face. It is up to ushow we treat them and help them come out of the appallingly vicious cycle and breathe a fresh lease of life.