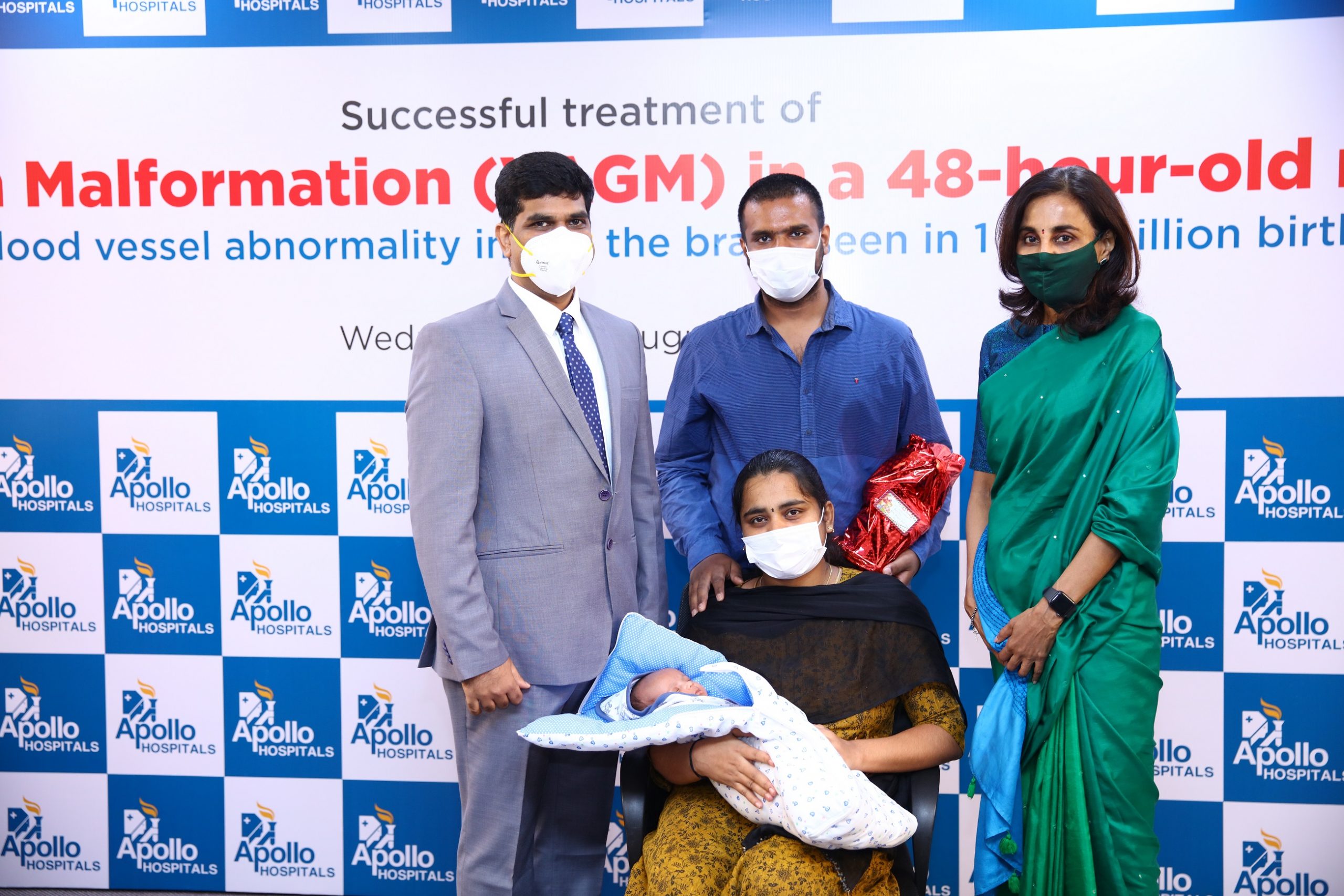 A new born baby was successfully operated on barely 48 hours after birth at Apollo Children’s Hospital, Chennai for an extremely rare blood vessel abnormality in the brain, called vein of Galen malformation (VOGM). Seen in 1 in 3 million births, the malformation was detected at the antenatal stage during the mother’s pregnancy. Endovascular embolization is the first option for treatment and all preparations were made for emergency surgery on the baby after birth. The mother was admitted in Apollo Children’s Hospital, antenatal MRI was performed and the baby was electively delivered through C-section.

As expected, the baby developed heart failure and multi organ failure secondary to the brain vascular Vein of Galen malformation. 48 hrs after birth, the neonate was taken up for Endovascular embolization of the malformation in the brain by a team led by Dr. Srinivasan Paramasivam, Head of Neuro-Endovascular surgery, Apollo Hospitals.

Dr. Srinivasan Paramasivam, Head of Neuro-Endovascular Surgery, Apollo Hospitals, said, “The Vein of Galen malformation is high flow abnormal connection leading to extra pressure in the veins that in turn cause a rush of blood toward the heart and lungs forcing the heart to work overtime to get blood to the rest of the body. This can lead to congestive heart failure in the infants with the abnormality. As the diagnosis was made at an antenatal stage when the foetus was in the womb, we were able to prepare in advance to treat the baby immediately after birth. Successful treatment of vein of Galen malformations is a complex therapeutic challenge and as endovascular embolization have shown to have good clinical outcomes, it was decided to go in for that procedure.”

In endovascular embolization, abnormal blood vessels in the brain are treated without having to perform open surgery. The procedure cuts off blood supply and blocks flow to the affected area, in this case, to the malformation. It is carried out by insertion of a catheter, a long, thin tube through the umbilical artery, which is then advanced into the affected blood vessel in the brain and “Super Glue” is injected to block the vessel.

Dr. Srinivasan Paramasivam elaborated on the procedure, “Successful embolization was carried out by approaching through the umbilical artery and using cardiac pacing. This is a novel technique to temporarily stop the flow of blood in the bodies during surgery, for inducing hypotension to aid in controlled embolization. This technique has been used in combination with brain embolization only a few times across the world. The procedure was performed in the Cath-lab at Apollo Hospitals, Greams Road, Chennai. Post the emergency procedure the baby has recovered and is doing well.”

Appreciating the team of doctors, Ms. Suneeta Reddy, Managing Director Apollo Hospitals Group said, “Apollo Hospitals has been in the forefront in treating rare diseases among children. The efficient team of doctors at Apollo Children’s hospital always strive to develop sophisticated treatment techniques to save lives. During this pandemic we at Apollo Hospitals have been addressing patients on a war footing, our doctors have ensured that there is no delay in time sensitive procedures. This procedure stands as a testimony to their commitment in reaching any extent to save lives.”