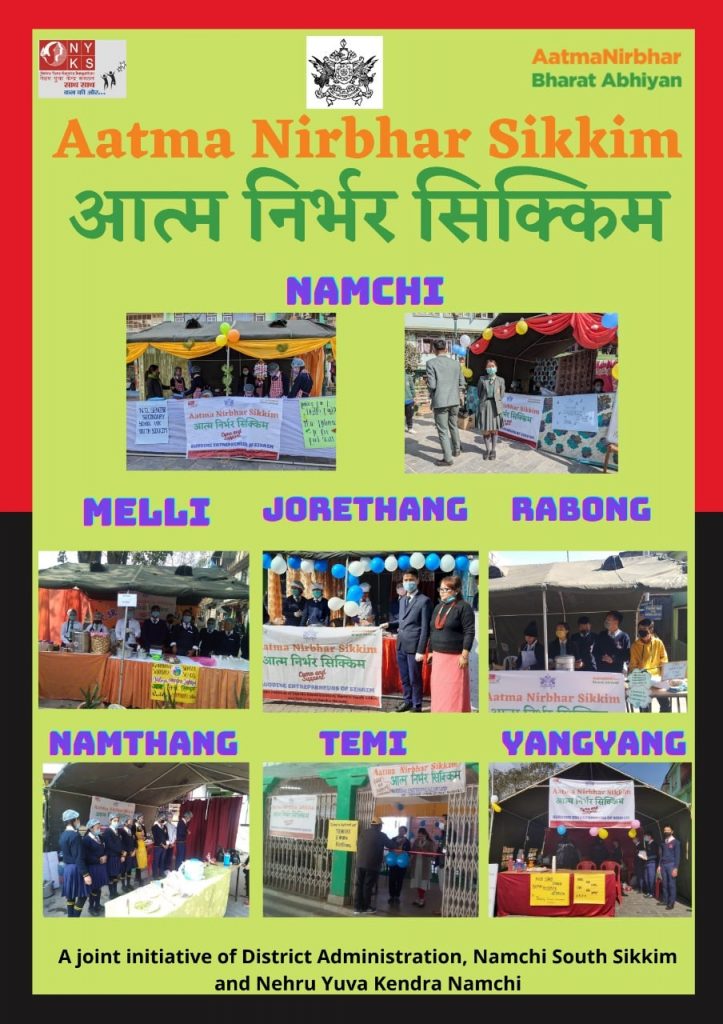 The Pandemic period has reiterated the necessity of creating an ‘Atmanirbhar Bharat’ and Prime Minister Narendra Modi has made it a national mission now. ‘Atmanirbhar Sikkim’, a joint initiative of District Administration, Namchi and Nehru Yuva Kendra, was launched on January 15, 2021, at all Block Headquarters of South Sikkim. Earlier, a Pilot test program was arranged during the month of November last year in which three schools from Namchi participated. After the successful implementation of this test programme, it was finally launched last week at district level in which one school from each of the eight blocks of south district participated. It was a three-day inter-school competition, held from January 15-17. Aimed at inculcating entrepreneurial skills among the young students in order to make them self-reliant and capable of generating employment by developing self-run businesses, this program is designed under the umbrella of government’s flagship program “Aatmanirbar Bharat”.

According to sources, the local Police are supporting the initiative by taking care of law and order and logistics while the Sub-divisional Magistrate and the District Collector are spearheading the entire program.

The three-day event included competitions where each participating team consisted of ten students from class XI and XII, along with two nodal teachers to assist them during the event. The financial assistance for setting up food stalls was completely borne by the students, for which every participant shouldered the duty of paying Rs. 500 as a primary investment, so that they have an asset of Rs.5000 as capital for buying the stuff needed to operate the food stalls for three days. Not only this, they were instructed to maintain proper accounts including balance sheet, details of expenditure and revenue generated. These statements and receipts were also assessed by the jury to verify the profit calculation of each team and reconfirm it with the actual cash balance submitted at the end of three days.

Notably, proper hygiene and COVID-19 protocols were strictly maintained by the participating teams and standard sanitation and safety measures were ensured throughout the course of the event.