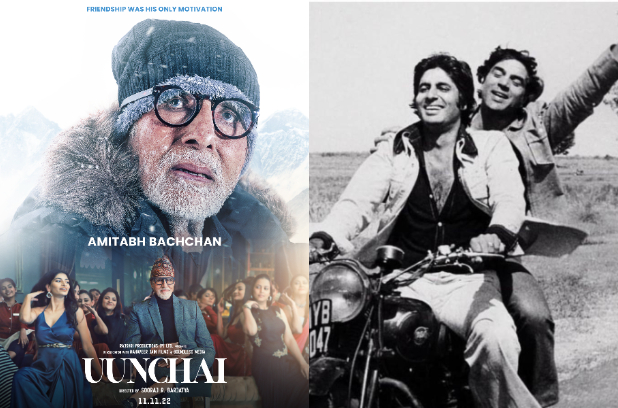 His Friday release Goodbye, a tear-jerker laced with nuanced performances is running at the theatres. And now, as Indian Cinema’s megastar Amitabh Bachchan is all set to turn 80 on Tuesday, guess who sent him good wishes for his upcoming film Uunchai. His good friend and Sholay co-actor Dharmendra.

The OG friends of Bollywood who celebrated friendship on the big screen and gave us – Yeh Dosti Hum Nahi Todenge, reunited today as Dharmendra took to Twitter to wish Big B ahead of his character poster launch from the much-anticipated film – Uunchai.

Amit , love you. I got a news from RajShiri production that you are doing a film with them. Great 👍 . Most talented actor and the best production house together. Wish you all the best 🙏. pic.twitter.com/Yg5wIEQaqM

Produced by Rajshri Productions in association with Mahaveer Jain Films and Boundless Media, Uunchai will be Big B’s first release in his landmark 80th year. Helmed by Sooraj R Barjatya, Uunchai is slated to be released on November 11, 2022.

An ambitious project, with an iconic ensemble, Uunchai remains a film that Big B blogged the most about on his famous online blog. The first poster of the film, which released on Friendship Day, had set the thematic backbone of the story – friendship! The tagline read – friendship was their only motivation. Taking the theme of the film forward, it was a heartwarming surprise that had friendship at its very core, as Veeru wished Jai for Rajshri’s Uunchai.

With the first character poster out today, two contrasting shades of this century’s biggest superstar, were revealed from his next release – Uunchai. Big B, on one hand, is seen in a suave avatar in a glamorous world. While on the other hand, a contrast image of his character from the film shows him with snow-burned skin, amidst ice-capped mountains, looking up with hope and ambition in his eyes.

T 4435 – This one from @rajshri is special ..
Meet me as Amit Shrivastava in #Uunchai on 11.11.22
This film by #SoorajBarjatya celebrates life and friendship .. Save The Date for @uunchaithemovie .. #75YearsOfRajshri | #Rajshri | #Uunchai pic.twitter.com/Ikm0lswYDW