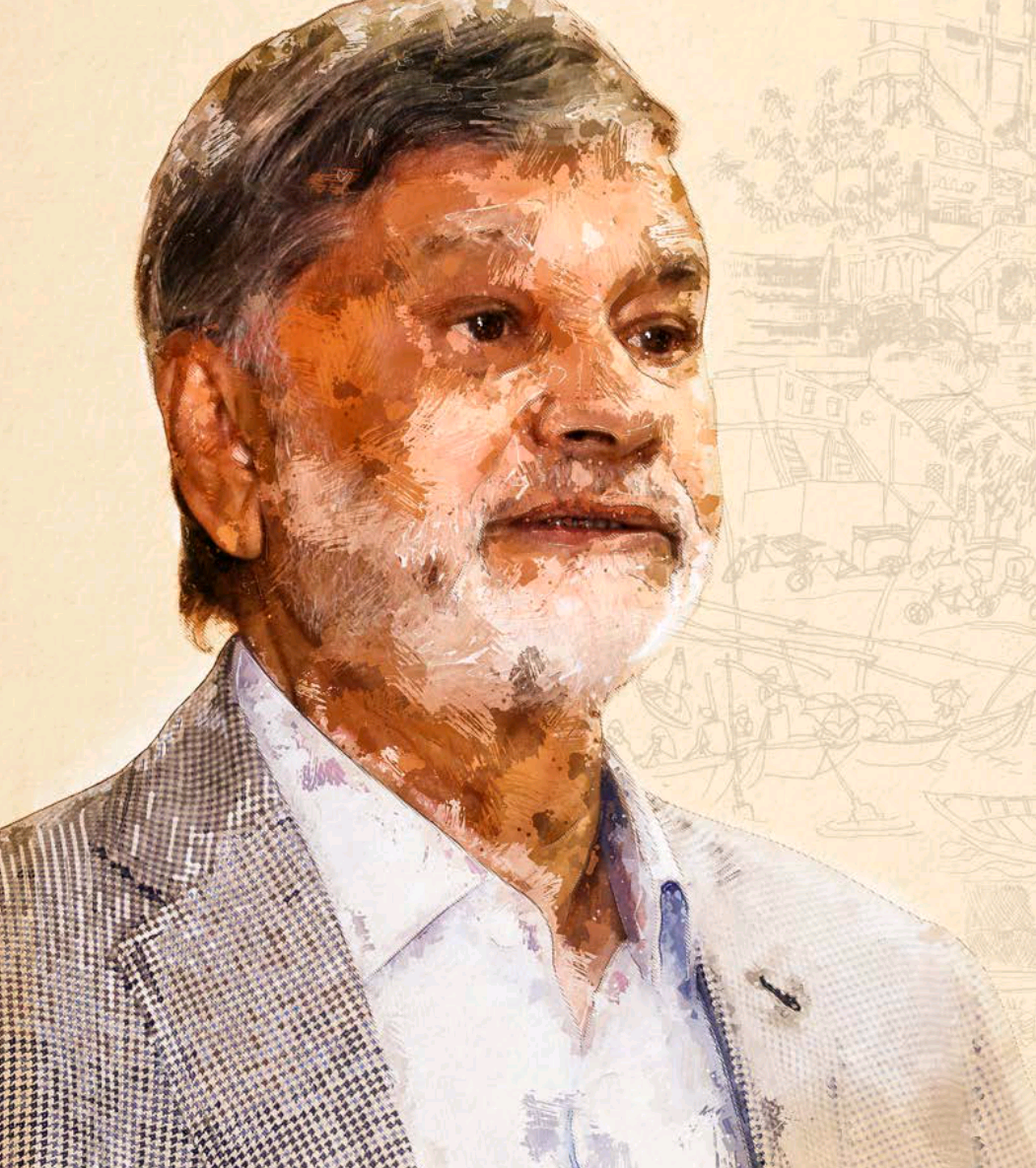 Bangladesh is quickly moving towards becoming an aspirational country. Its robust economic growth and technological innovations have taken the country to new heights, be it their ambition to aspire or their confidence in their able leaders. Though there is abject poverty and the per head income level lies in the lower range of world data, Bangladesh seems to defy odds to bring about a positive change. There’s definitely a lot more to the slowly rising graph of economic breakthroughs.

In an era, where the terms “developing nations” and “developed nations” still exist, it is a quiet truth that Bangladesh might fall under the “developing nation” quota, yet I have seen development in close quarters and I can proudly say that a huge transformation has taken place. There are challenges and hurdles but the important part is to move beyond them and overcome them through hard work and consistent endeavour. However, Bangladesh has witnessed a sea change in every aspect and it is visible. Global entrepreneurs and businesses have found a good platform to exhibit themselves, which is not good for them but us too. Even a few years back, resources were limited and there was a dire need of investments. Everyone understands the need for globalisation and can gauge its importance on the economy. In Bangladesh, the situation is better now as partnerships with foreign investors have massively opened up the doors for trade and business.

With Bangladesh declaring its eagerness in investments, it now has to streamline the momentum and movement in domestic and local small markets, which are extremely important factors. Initially, due to the low-income levels and resultant lower purchasing power, people were not consumers of such a scale that would have attracted big MNCs of consumer goods, for example, to invest.

Besides being what can be termed as the next-door neighbour with excellent road and rail connections, the Indian markets used to defuse interests of setting units of MNCs in Bangladesh. We have gradually tried to come out of this notion along with the increase in per head income level. In 2009, when we came to power, it was $600 while today it is $2000, a threefold increase in the intervening period. So, MNCs are seriously considering investments, our domestic players are also actively investing with indigenous products, either on their own or in joint ventures with the MNCs. Being a member of the World Trade Organisation (WTO), we have to have a uniform and fair system and environment in the field of investments. We, additionally, enjoy certain marginal benefits etc. and being a lower income group country, it also gives a fillip to other nations to invest in Bangladesh. We have provided electricity to remote areas with a view to paving way for development. We are importing crude to facilitate the use of fuel. Roads, railroads etc. have already been developed. Now, the river and seaports are also being expanded for these purposes. We have removed, as far as possible, official red-tapism and instead, many official jobs have been streamlined through direct dealings for speedy process of developmental activities. We have also brought certain reforms in direct and indirect taxes like the introduction of tax holidays with enhanced terms.

Added on to this, the introduction of the VAT system has changed the outlook of business in the country. In each stage, from the conversion of material in a manufacturing process till it attains its finished form as a usable product, there is a tax on value addition, which is now 15%. But for effective and all-encompassing enforcement, computerised environment with wide Internet facility is necessary. So, in the teething stage, we could bring only big houses, stores, hotels, restaurants etc. in the tax net, leaving small and local shops or establishments, albeit, a large number, out of the net.

The small and medium-sized enterprises dominate the economy to a huge extent as they are the backbone of our nation and contribute immensely to the overall growth of the economy. If we look at statistics, our industrial sector majorly makes up 31% of the country’s Gross Domestic Product (GDP), half of which comes from the SMEs. The total number of SMEs in Bangladesh is estimated to be around 79,754 establishments. Of them, 93.6% are small and 6.4% are medium. In fact, we have created an open market policy where we have opened the doors for everyone to set up their projects here and work together to contribute to the growth of Bangladesh because globalisation means to imbibe what is good for us from the rest of the world and that is exactly what we are planning to do. At the same time, it is also to be kept in mind that global partners do not overshadow our local traders, which might be a threat for many. Having an open market policy clearly indicates two things:

There is a constant ‘global pressure’. We understand the importance of foreign investments and at the same time, the local businesses must be kept in mind. We aim to create a perfect balance between the two, where we try to achieve both ends.

It is obvious that gradually there will be increasing pressure from the outside big business houses. We are not averse to their opening centres here but at the same time, we are protective towards our native entrepreneurs as well.

Besides, some public sector corporations can be set up to boost indigenous produces. But they may not prove viable in the era of globalisation. Our Prime Minister is also in favour of liberalisation. However, it is finally the people who decide the extent of liberalisation.

Digitisation: Reaching out to the rural & remote areas

Coming to rural Bangladesh, it is indeed a vast area and a segment which is gradually developing. However, there are the left-out poor and vulnerable households in selected districts still. As a responsible citizen and a minister, I feel we must put special focus on these sectors. When we talk of digitisation, it appears to characterise the urban areas and the lives of its dwellers. This is the trend which is changing as the wave of digitisation has already reached the villages in our country. We are aware of how illiteracy continues to be a substantial and stubborn block. Second, many poor people don’t have the means to procure the bare minimum machines required to operate. Digitisation in itself is a vague thing and is to be substantiated with terms such as “Internet”, “computers” and “smartphones”. First and foremost, we are trying to impart digital education to each and everyone, which will increase the awareness of technology among all. Secondly, creating more job opportunities and reaching out to the villagers is important so that they can earn more and buy all the required materials. The primary focus is on lowering the vulnerability of the deprived to menaces by augmenting skills to increase the scope of employment opportunities as well as supporting small and medium-sized industries, demand-driven community investment projects that are ranked, executed and managed directly by the rural poor, along with digitisation. One advantage that we have is the thin density of population, which increases our reach and we can easily penetrate the rural areas, making it easier to focus on a large group of people at a time.

One vital point we emphasise on is the importance of our rural sector. Be it the medium-sized industries, or the thin density of population of the villages or the struggling villagers — according to us, there is no discrimination between the urban and rural sectors of the country. There is no thin line that separates urban towns and rural households. Through digitisation, the villages are now inter-connected and through integrated circuit, villages and towns can be brought closer to each other like never before. Today, our villages have an added advantage of electricity which is really turning the façade of the villages and the rural areas. We have electric lights in almost 95% of the houses. The priority is to ensure that everybody enjoys the same privileges and facilities and no one is deprived of the rights and benefits. We believe in equality for one and all, irrespective of whether he/she hails from a village or a town.

The influx of Rohingyas is nothing new. They have been entering Bangladesh from as early as the 1970s. However, the recent sudden influx, like a tsunami, could not be perceived before it actually happened. So, we had to tackle it like disaster management. It will not be out of context here to highlight that Bangladesh has endured and handled a lot of onslaughts, by nature as well as man, over a long period. Consequently, we have become more solid and gradually developed a system to manage onfalls. Our departments are always alert, prepared and equipped to handle such situations even without any advice or instructions from higher authorities up to a point. So, in case of the Rohingyas’ humongous influx, our police, army, department of relief etc were all on their toes and put forward joint efforts to relocate and accommodate them.

Despite having an almost four-fold increase in development which has given us the tag of ‘New Bangladesh’, India continues to maintain the same ‘good-old’ bond that it used to have with Bangladesh. The strong cultural, social and economic ties that it continues to share, strengthen the relations between the two countries. A shared history and common heritage are the two factors among the many others that have united the two nations always and will continue to do so in the days to come. We hope to have consistent friendly ties with India and an ever -enriching bonhomie in the future as well.