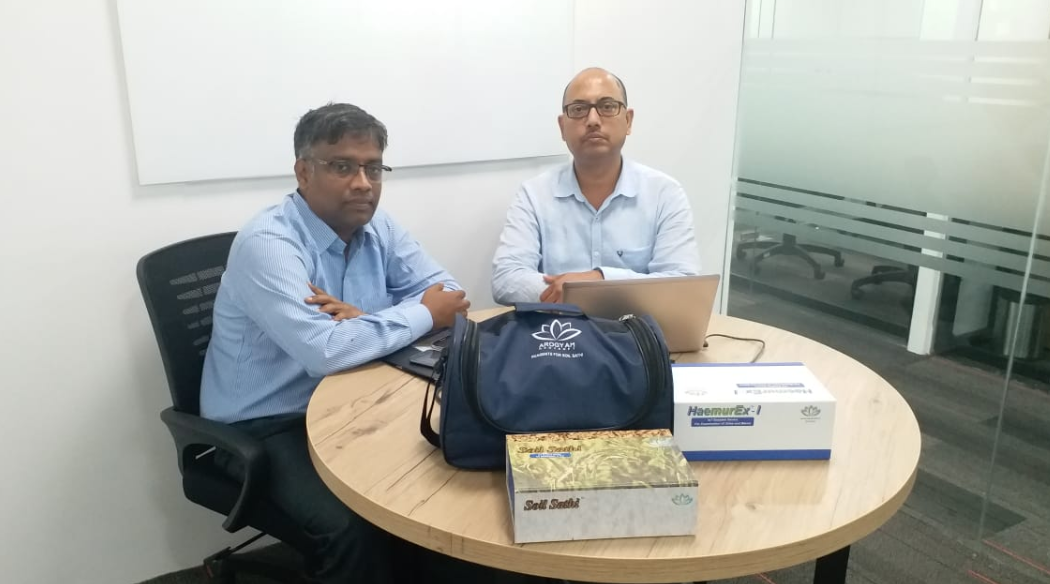 India is a country where agriculture is still the most important occupation for the majority of rural people. A major chunk of Indian rural population has been engaged in farming since ages. Due to the ongoing economic issues, agriculture has been adversely affected and farmer suicides have become an everyday affair.

Productivity is hampered leading to degraded crops quality. However, another cause of low quality crops is failure to identify soil type. Understanding the soil type based on the elements presents in soil, is important to identify the best crop suitable for it. Rajiv Mondal and his friend Partha Chakraborty, from IIT Kharagpur, stepped forward to address the issue of understanding soil fertility issues in Bengal through their device “SoilSathi” developed by Arogyam Medisoft Solution Pvt Ltd. The device and connected platform is expected to help farmers and also to boost crop production.

Rajiv has been a civil engineer from IIT Kharagpur, . After returning to India from the Middle East he started working with ICICI Winfra. In the year 2004 he started travelling to remote areas of Bengal to oversee the industrial infrastructural projects. Shortly after working in those areas it came to his mind that addressing the root cause, i.e. livelihood is critical to bring about development for the rural communities. To bring about the desired change by leveraging advancement of technology, he partnered with his friend Partha to focus on crop production, which they felt can be a game changer in boosting rural livelihoods.

“Bengal is a state blessed with good land and fertile soil. But farmers are unable to grow best quality crops because they are incapable of identifying crops that yield the best harvest based on the nutrients available in their land, and as a result the crops are not up to the mark. This is mainly because of poor soil testing. The Government of India had launched soil health cards scheme targeting providing test based solution but it was difficult to test samples of each individual plot due to lack of soil testing labs. The unavailability of nearby soil testing laboratories made it difficult for the farmers to get the soil tested. Results often takes more than a year and by the time results come, the soil’s quality may have changed from when the samples were collected. To resolve these problems, we introduced SoilSathi device to check the nutrients of the soil, at the field level. In short it’s a soil testing lab inside a bag,” shares Rajiv Mondal.

How does it work?

The SoilSathi device is extremely easy to use; it is light weight and battery operated. It weighs around 350 gms and can be used anywhere on the field. Talking about its usage, Rajiv Mondal says, “All you have to do is take a soil sample. This can be done by mixing soil with distilled water and the reagents present along with the reagents pack. Once the sample is ready, you can put it in the device. There is an app in the device. The app will provide result based on , the parameter chosen after pressing the green button and the result will be shown on the screen. The results can be stored in central server for future reference and advisory on optimal farm input can be provided remotely. The device came as a great relief for farmers at this time of COVID19 pandemic, as it frees them from visits to distant test centres where risks of catching the virus are extremely high. Using this device, a person can test soil and get advisory on farm input at their doorstep. The results can be Whatsapped or e-mailed as per requirement. The device is GPS enabled and can create soil health map. It makes possible the testing of soil macro nutrients, micro nutrients and water in a single device. This why we can also use this for aquaculture also. These unique advantages have created a huge demand for the device and we are seeing increased engagements every day” Mondal enthuses.

Whenever a new device comes into the market it has to go through certain steps to ensure its validity. To establish the efficacy of their device, the duo got it validated by ICAR-KVK. “While validating our device questions about credibility of the test results arose. ICAR-KVK at Sutturu, KVK-Narendrapur and Vivekananda Institute of Biotechnology, Nimpith helped us resolve the issue, following which we received the validation. Initially we did our pilot testing in Purulia, Kalimpong, Telengana and Andhra Pradesh to capture varieties in the soil,” shares Mondal.

““We have received a lot of support from the West Bengal government. The Additional Chief Secretary of P&RD Department gave us centres at Comprehensive Area Development Corporation to test the device. SIIC at IIT Kanpur incubated us giving us space and facility in their Bionest. WEBEL has empanelled us and is already marketing our products in government sector.Our friends and family too extended immense support to our venture in terms of capital, market connect and inputs for product development. Also, this is totally a ‘Made in India’ product with all parts produced in the country. This directly supports the motto “Atmanirbhar Bharat”. India and Bengal have a lot of opportunities that we are yet to explore” he adds

The concept of Atmanirbhar Bharat is an idea which is being promoted to highlight products of India. SoilSathi which addresses issues like productivity and good crops is expected to open up an array of opportunities for the agriculture sector of India. People in Purulia have already adopted the techniques of handling the device and are ready to use it. This shows acceptability of the device.   “We believe farmers can easily set up their SoilSathi Testing lab through SoilSathi device which requires lesser investment than setting up any such conventional lab. Migrant labourers are also experts in farming and can be trained as to how to use the device. This will serve two purposes: first, it will help villagers and returning migrant labourers start their own entrepreneurship at a minimal cost which in turn will ensure their livelihood. Second, it will help farmers get soil results in their village itself like never before. We aspire to bring on board young entrepreneurs to strengthen the team of SoilSathi so that more users could be benefitted, and agricultural productivity is boosted,” signs off Mondal