To boost the Fishonomics of Bengal 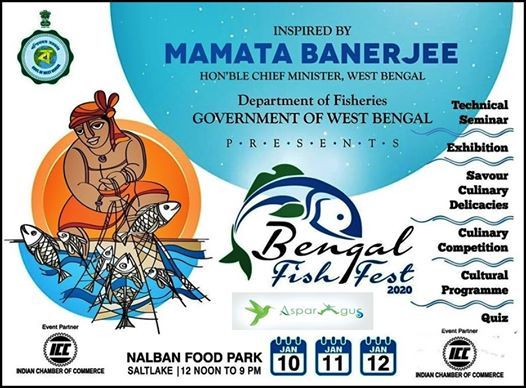 Fishes have always been the staple food, in Bengal. Kolkata is reportedly known as the largest producer of fish and the state has been producing large quantities. The Government of West Bengal made arrangements for flourishing the fish business in Kolkata. Thus, the surplus production of fishes, now allows Bengal not only to carry on the fish production, but provide a gateway for export of fishes to other places like Bhutan, Nepal and Bangladesh. In fact if we look at the export value of fishes in India, during FY 2011 to FY 2018, the export value has gone up from 119.17 billion to 476 billion within a gap of 8 years.

Initiatives taken up by the Government of West Bengal.

The city has an ever increasing demand for fish supply, and there is no dearth of it. The Government of West Bengal has arranged for fish farming which helps in the production of species such as catfish and salmon. The city is now offering Hatchery business. Besides, having these types, there is a special facility of cold storage transportation services, which helps to utilize the full potential of the fish industry in Bengal.

The demand for sea food and other fish items have been growing. It has been said that the total fish production in the state during 2014-15 was 16.17 LMT(Lakh Metric Tonnes) and its contribution towards SDP is 2.35%.

Thus a constant need to harness the investment is fishing and fisheries is looked after and to support the growth of this ever growing business, a brilliant initiative of organizing the Bengal Fish Fest has been taken up by the by the Indian Chamber of Commerce and the Department of Fisheries, West Bengal under the able Government, The State Fisheries Development Corporation arranged for the Fish Fest, 2020 at the Nalban Food park which started from 10th of January to 12th of January 2020, and featured different stalls from all across the city. The love for sweets is something which keeps calling people from various places to Kolkata and these fish fests have doubled up the craze. A lot of food festivals are arranged in the City of Joy every year during the winter season, and the fish fest is one amongst them.

“Mitra Café, Kolkata has a long history of making fish cutlets and fish kabiraji- but the Government has invited us to come here. It is totally free of cost and we come here because people keep love to eat fish. We have a designated outlet in Kolkata which is running very successfully here, but it feels good to come here and showcase more varieties” says Pinaki Dinda .

Talking about varieties, Mr Sudipta Saha from Digha has come all the way to Kolkata just to sell and market the varieties of fishes here. “People in Digha are not so keen towards trying and experimenting with fishes and different dishes, but when we got a chance to come to the Bengal Fish Fest organized by the Department of Fisheries, West Bengal, we were assured that this is a fairly good platform to show our varieties here. In Kolkata people love to eat fish and try different dishes. It is very profitable for us as well”.

Mrs Sharmistha Chowdhury who was there in the fest was eagerly visiting one stall after the other to pick up her favourites. “I love to eat fish, and every time I come to this fest with my family, because we are typically ‘Macch-Lovers’! And we come here for the 3 consecutive days. When the Government has organized such an event, there is no chance of missing it. The dishes are reasonable and the food is very fresh. We love coming here”.

The State Fisheries Development Corporation is highly satisfied with this initiative and says “we have visited different food festivals. We are doing so well, that we can now proudly say that we have topped the list among fisheries department and we have left behind Benfish as well. We collect all the fishes and bring them here from Haldia and Henry Island; at the same time we have an outlet at Nabanna which is open for 365 days. So anyone can visit the outlet and have a taste of the dishes”, says an employee and store manager of the State Fisheries Development Corporation.

Fishes have always been in high demand in the city, and these fish fests really gives new ideas to businesses in Kolkata. Kolkata has the required condition for fish production, which is being efficiently utilized by the Government and thus these fist festivals are organized to give an extra boost to the entrepreneurs which allows them to carry on fish production with low investment.
This really brings joy and smiles on the faces of the Kolkatans at the same time promotes the growth of several fish cuisines too.
And whoever loves to eat fish, this place is surely a paradise for him/her.