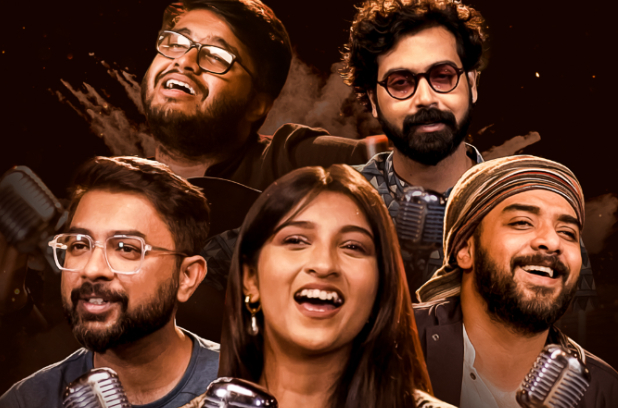 Sani Ghose Ray’s web series Srikanto didn’t leave much of an impression but Debayan Banerjee’s song Amake Nao did. Written by Pralay Sarkar and Jyoti Hazra, the song is raw, gritty and unapologetic. Lagnajita’s Behaya from Ekannoborti has a soothing touch. Composer Mainak Mazoomdar makes us feel nostalgic about family with the gentle tones. So, what happens when these talented musicians come on one platform and that, too, on World Music Day.

Oriplast has teamed up with SVF Music on World Music Day to present ‘Musi-Fusion’ with a group of young, talented musicians from Bengal. While Debayan’s Amake Nao became widely appreciated, Ranajoy Bhattacharya made a name for himself for his song Mon Kyamoner Jonmodin. Rishi Panda and Prajna Sil Sharma’s covers are popular across YouTube, and their renditions of Ami Ashbo Phirey and Boka Pahaar respectively were lapped up quickly. Mainak ‘Behaya’ Mazoomdar presented the recently-released Bhul Korechi Bhul from Vikram Chatterjee and Madhumita-starrer Kuler Achaar.

“Musi-Fusion has got some of the best musicians who have come to define this generation with their own style of music. World Music Day is important because it reminds us of the power of music and the way it touches lives across the globe,” said Mainak.

For Ranajoy of Preme Pora Baron fame, music succeeds where language fails. “Imagine how bland life would be without music?,” said the Hridpindo music composer.

Young Debayan was thrilled with the idea of sharing the platform with other musicians of similar calibre. “This a great way to boost upcoming talent while celebrating our love for music,” he said.

Prajna Sil Sharma’s rendition of Boka Pahar from web series Shobdo Jobdo was a hit. “Music is something that defines me. Music has the power to heal, and connect with people beyond borders,” she said.

Rishi Panda’s balmy voice will calm your soul especially if you haven’t listened to Tumi Bhalo Theko. “It doesn’t matter what I’m going through, but music has always had the answer to the yearning of my soul. I am proud and happy to have been a part of SVF Music’s Musi-Fusion,” said Panda, who sang Nee Dutt’s composition Aami Ashbo Phirey on World Music Day.