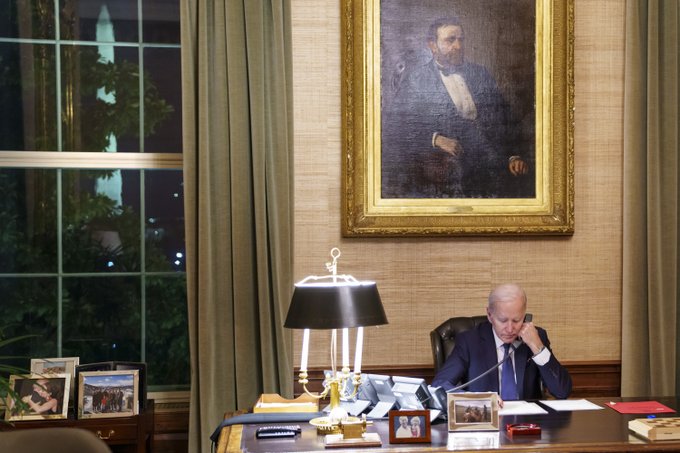 Washington: President Joe Biden ruled out any direct intervention by the United States in Russia’s war against Ukraine, stating on Friday that such a NATO-Russia clash would lead to “World War III”.

“We will not fight a war against Russia in Ukraine,” Biden said in a speech at the White House amid desperate calls from Ukraine for NATO to intervene against the Russian attack.

Biden also spoke with Ukraine President Volodymyr Zelenskyy to underscore his support for the Ukrainian people as they continue to defend their country against what he called “Russia’s unprovoked and unjustified attack”.

President Biden highlighted how the United States is continuing to push for security, humanitarian, and economic assistance to Ukraine.

He also updated President Zelenskyy on the actions the United States was taking in coordination with the G7 and the EU to further raise the costs on Russia.

“I want to be clear: We will defend every inch of NATO territory with the full might of a united and galvanized NATO. But we will not fight a war against Russia in Ukraine,” tweeted Joe Biden.

“A direct confrontation between NATO and Russia is World War III. And something we must strive to prevent,” he added.

Biden, however, said 12,000 troops had been moved along the borders of Russia’s neighbouring countries including Estonia, Latvia, Romania, and Lithuania. He once again asserted that Russian President Vladimir Putin would not come out victorious in the war.

Speaking to members of the House Democratic Caucus on Friday, Biden underlined his stance of “not fighting a third World War in Ukraine” adding that he would ensure that an “unmistakable message that we will defend every inch of NATO territory” was sent to Russia.

One of those messages has been in the form of US-led sanctions against Russia that have already negatively impacted the Russian economy. Most recently, Biden had announced the ban on all imports of Russian oil and gas and energy.

“That means Russian oil will no longer be acceptable at U.S. ports and the American people will deal another powerful blow to Putin,” he had said.