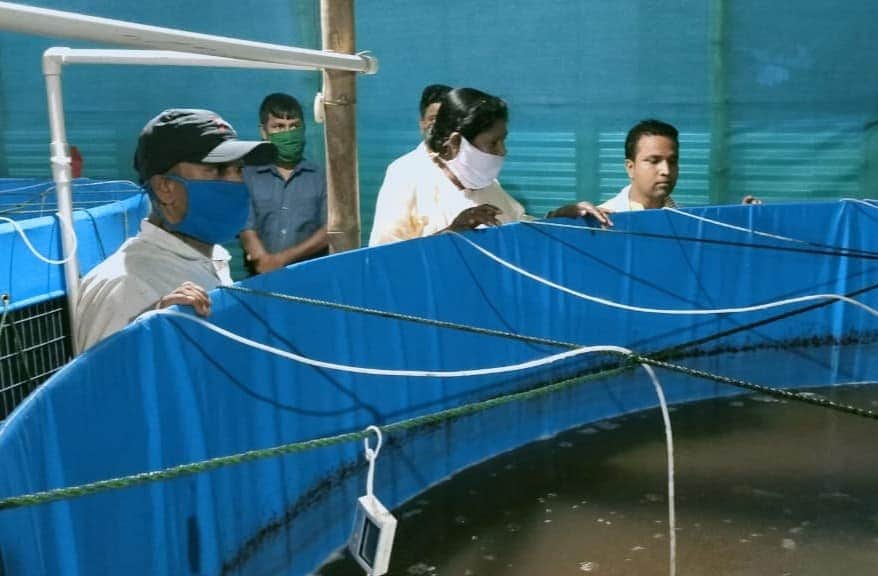 As morning sets-in at Bashpukur, a bordering village under Sepahijala district of Tripura, a group of enterprising women step out to attend their business. Beating pandemic blues, these she-preneurs would answer the call of duty, every day. Members of Neer Mahal Village Federation, an amalgamation of local SHGs, are perhaps the first professional women fish-cultivators or fisherwomen of the district, in fact, of the entire state.

These 60 to 70 odd women, who are part of the federation, have taken pioneering attempts to bring in radical change in the fishing culture of their region through Biofloc. Though their project is still embryonic, they are optimistic to become self-reliant in the near future through Biofloc.

Being a unique type of fish culture, “Biofloc” has already made inroads to the rural even in urban areas. People like, MP Pratima Bhowmik, Assembly Speaker Rabati Mohan Das and many others have started Biofloc in their own capacity, either in their unused backyards or at the terraces. However, a commercialized approach and that too by women was done for the first time at Bashpukur. Mithu Rudra Paul, Chameli Karmakar, Suchitra Paul, Priyanka Rudra Paul – hitherto nondescript village women, have emphatically broken the proverbial glass ceiling to lay the foundation of a phenomenal change.

“There are 60 members in our Village Federation. For now, we have started with four 10,0000 litre tanks which can give 300 kilos harvest each, twice a year. Though, we still have a few months to go for the cultivation to start, the health of the fishes is good and we are hopeful to fetch good profit and repay the loans we have taken to run the project”, shared Mithu Rudra Paul enthusiastically.

Speaking on the project, she added, “This has come up as a challenge for us. Our Neer Mahal is a fisherman community. But, to our utter disappointment, fish is not the thing our area is known for. We are trying to change that by encouraging more and more people to come with us and join hands in making Tripura self-sufficient in fish”.

Elaborating on the idea of Biofloc, Debtanu Barman, the key resource person behind the concept said, “The concept of Biofloc is nothing but a scientific way of enhancing fish cultivation in limited water. Since there are no large scale water bodies in Tripura, Biofloc has the potential to be a game changer. Generally, we use good bacteria to convert the fish excreta into food so that large numbers of fish can stay in a comparatively smaller space”.

Biofloc, Barman added, is an effective scientific technique for fish culture. Here in Bashpukur, local women have shown interest in fish culture to achieve financial stability and in doing so have embarked on an enterprising project.

Barman who runs his own fish consultancy company at Kolkata had to stay at his native village in Tripura due to the COVID19 pandemic. Utilising the gratuitous time gainfully, Barman has helped nearly 600 to 700 people in setting up Biofloc projects in the state.

“Biofloc is a tested formula of success, but requires dedication and hard work; one has to give at least five to six hours of time everyday to the fishes and only then think of making profit at the end of the season,” he warned.

Being asked about the type of fish that can be cultivated through Biofloc, he notified, “The fish that love to be in high density water are the most suited type for Biofloc. Tilapia, Carp and Koi are preferred as these fishes have good buyers in the markets. Big fishes like Silver Carp, Katla can be also cultivated but then you have to sell them early, fetching a moderate price in the market”.