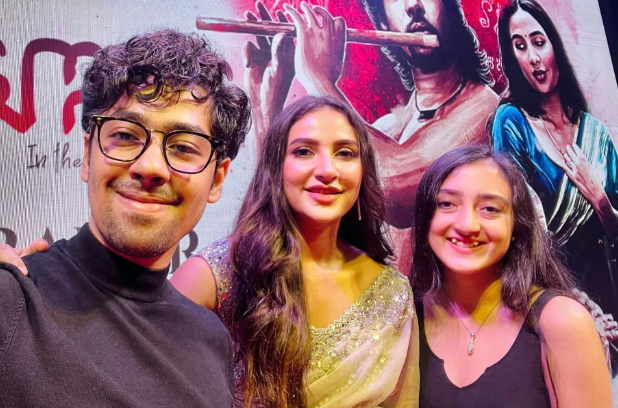 Who better than National Award-winning music director-turned-filmmaker Indraadip Das Gupta to make a film on music, love and Ustad Bismillah Khan? Now, before you draw any conclusion, here’s a clarification. Indraadip hasn’t made a biopic on the Shehnai maestro Ustad Bismillah Khan, but his upcoming Bengali release — Bismillah — is an ode to the legendary musician, who made Shehnai, the folk instrument, popular across the globe.

The trailer of Bismillah is out. With a unique mix of music, lyricism, and narrative, it seems Indraadip has painted a beautiful poem on screen. The 2.20 minute trailer talks about love and communal harmony through music.

Here we see National Award-winning actor Riddhi Sen as Muslim boy Bishu (Bismillah), Gaurav Chakraborty as antagonist Sibhu and Subhashree Ganguly as Radha. The trailer narrates the journey of Bismillah’s growth as a Shehnai player under the guidance of his father (Kaushik Ganguly).

The Nagarkirtan actor calls it a ‘dream’ for any actor to work with filmmaker Kaushik Ganguly. “I am lucky that I got to act alongside him and also work with him as a director in Nagarkirtan. When he is the director, I know I am in the best hands because he is the best judge. When I am sharing screen with him, Kaushik Ganguly is just fascinating,” said Riddhi.

During the launch of the trailer, Indraadip said he couldn’t find any female actor in Kolkata but Subhashree to play “his Radha.” On hearing this, Subhashree couldn’t control her emotions. “I have had so many sessions and workshops with the director but not once did he say something like this. Coming from him, this means a lot and my responsibility as an actor also increases manifold. He said that after he watched me in Parineeta, he found his Radha. It is such a huge compliment,” said Subhashree.

Gaurav is happy to move out of his comfort zone and play an antagonist. “Sibhu gave me a chance to prove myself as an actor too,” he said.

Indraadip had created his audience with his directorial debut Kedara starring Kaushik Ganguly in the lead. With Bismillah, he wants to show the tussle between tradition and modernization in a music family. “I am not here to show how art is sold. But the film traces the journey of a musician and captures his emotions,” said the hit music director of Bengali films like Chander Pahar, Mishawr Rahasya, Rajkahini, Chotoder Chobi, and Golpo Holeo Shotti to name a few.

Ask him about the communal disharmony depicted in the trailer and he said, “Music, soil and artists cannot be divided by religion. Though it’s not a biopic, Ustad Bismillah Khan used to visit both mandirs and mosques. God has no religion. Love has no religion.”