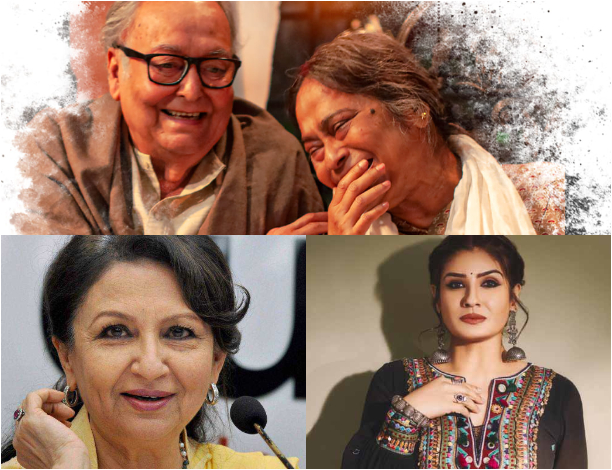 Nandita Roy and Shiboprosad Mukhopadhyay’s film Bela Shuru, which brings the late legendary actors — Soumitra Chatterjee and Swatilekha Sengupta — on the big screen one last time has set the cash registers ringing in West Bengal. While Soumitra passed away on November 15 last year, his Bela Seshe co-star Swatilekha died on June 16, 2021.  And as expected, the audiences are flocking to the theatres to watch the Bengali relationship drama, which comes seven years after Bela Seshe (2015).

From Raveena Tandon, Sharmila Tagore, Arbaaz Khan, Bhagyashree to Boney Kapoor, Bollywood fraternity, too, have joined in to congratulate the director duo and cast members of Bela Shuru on their success.

While the audiences are raving about the performances of the veteran actors — Soumitra and Swatilekha — who suffers from Alzheimer’s in the new film, Rituparna Sengupta’s Mili is also getting a lot of attention. In Bela Shuru, Mili is a strong personality with an independent voice and shares a deep bond with her father.

Raveena has sent warm wishes to her friend Rituparna and congratulated the team on the pan-India release of the film. She also paid tribute to both the legends. “My warm wishes to the entire team of Belasuru for the India release today 27th May  ..My tribute to the legends Soumitra Chatterjee and Swatilekha sengupta …Best wishes to my friend @RituparnaSpeak and directors @ShiboPrasad and Nandita Roy,” she posted on Twitter.

My warm wishes to the entire team of Belasuru for the India release today 27th May ..My tribute to the legends Soumitra Chatterjee and Swatilekha sengupta …
Best wishes to my friend @RituparnaSpeaks and directors @ShiboPrasad and Nandita Roy. pic.twitter.com/oytuIOYcFF

Veteran actress Sharmila Tagore shares a deep connection with Soumitra having made her debut alongside the legendary actor in Satyajit Ray’s Apur Sansar in 1959. In a message, she said how Bela Shuru gives the opportunity to watch Soumitra and Swatilekha for the last time. She has sent her love to Rituparna and the team of Bela Shuru.

Arbaaz Khan, who is sharing screen space with Rituparna in the upcoming Hindi film Kal Trighori, took to his Instagram story to congratulate his co-star and the entire Bela Shuru team on the success.

Having released a week back, Bela Shuru has garnered more than Rs 2 crore at the box office. Also, the entire team of Bela Shuru got emotional when dairy brand Amul paid a heartfelt tribute to Soumitra and Swatilekha.

Amul shared a graphic featuring the animated versions of the legends recreating a scene from the film where Soumitra is seen combing Swatilekha’s hair. “Belashuru, the film stages the comeback of Shri Soumitra Chattopadhyay and Smt Swatilekha Sengupta- the first time in Indian cinema that both lead actors of a film have passed away,” the post caption reads.

“This Bela will never end Taste isse Shuru,” are the words inscribed on the graphic shared by Amul.

Shiboprosad was elated after Amul’s tribute. “This has left me speechless! Honoured. Humbled. Thankful. This is a proud moment for all Bengalis,” the filmmaker wrote on Twitter.