BSF Seized cattle and contraband items worth over Rs. 2.8 Crore 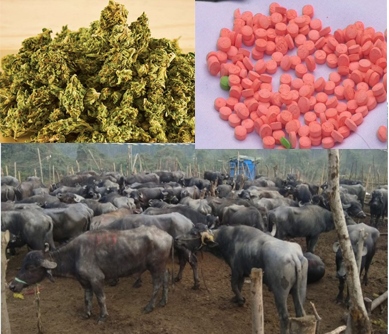 With increase in cattle smuggling, especially in East Khasi Hills and Jaintia Hills, the attempts of cattle smuggling by smugglers from India to Bangladesh is keeping troops of Border Security Force on toes round the clock.

During the last one week, Border Security Force (BSF) seized 691 cattle and contraband item like yaba tablet, Ganja with apprehension of 36 miscreants involved in Trans Border Crime. The total seizure was worth over Rs.2.8 crore along the international border with Meghalaya. These items were to be smuggled to Bangladesh.

It is a matter of great concern that numbers of truck loaded with cattle’s are transported from neighboring state Assam on daily basis which is ultimately reaching the border for smuggling to Bangladesh. The BSF has also requested concerned authorities to check the transportation of cattle from hinterland to bordering areas in the name of local consumption, these cattle are being taken to Bordering area concealed in truck even when there is no butchery in the bordering areas.

Shri. U.K Nayal PPMG, DIG , PRO BSF Meghalaya stated that, frequent seizures by the alert BSF troops indicate, smuggling of cattle has shown a phenomenal increase this year at International Border Meghalaya. Though desperation on the part of cattle smugglers is seen, as they are making very daring bids to cross over the cattle to Bangladesh but somehow they have not been successful. He further appealed to the local police and other sister agencies to come forward for joint operation to stop the menace of cattle smuggling.