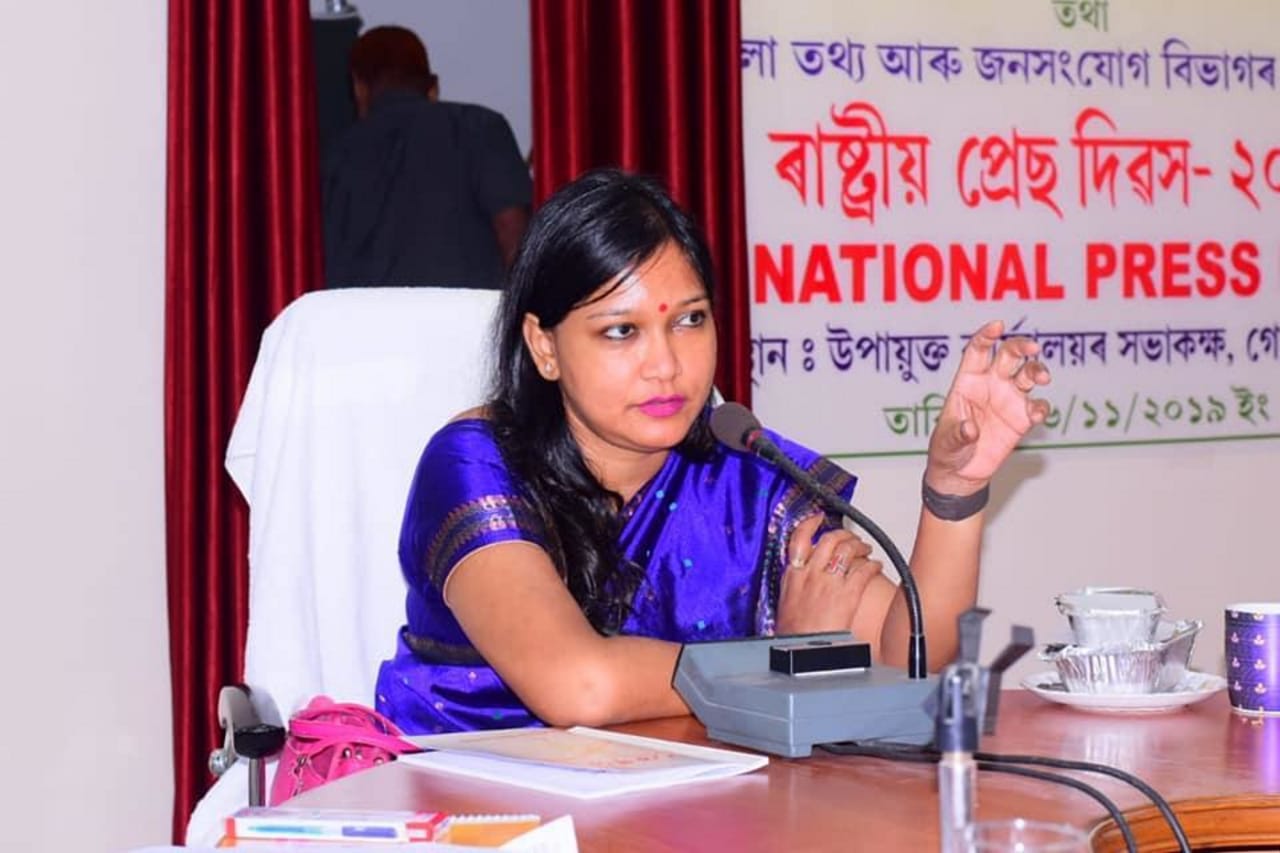 Varnali Deka, an IAS officer of the Assam-Meghalaya cadre, is silently bringing about a transformation in an Anganwadi centre at Budhipara and turning it into a model for others to follow. Based on the concept of ‘Building as a Learning Aid’ piloted by UNICEF, the centre would attempt to increase the attendance of children. This will be in addition to the existing Anganwadi model of the ministry for efficient delivery of the Integrated Child Development Scheme.

For the first time, this Anganwadi has most of the child-friendly facilities. You must be familiar with the concept of BALA building and learning aid. We have play areas where we have used the solar system and put up the alphabets in an exciting pattern. This Anganwadi centre has other facilities like a baby toilet, running water, electrification through solarisation and other environment-friendly initiatives including rainwater harvesting, groundwater recharge, garbage disposal, nutri-garden, play area and the like.

The scenic beauty of the artistically painted centre, conservation and recycling of rainwater, varied learning materials impress all. Developed keeping in mind child-friendly facilities, the centre will play a key role in the overall development of children at the formative stage. The proposed projects include one-stop centre ‘Sakhi’ to redress purported harassment subjected to women under the Union ministry of Women and Child Development, patients’ registration and waiting room at Goalpara Civil Hospital under the WPTBC department.

I think it is at a formidable stage but the concept is extremely essential. It’s like one-stop centre which has all the necessary know-how and the options available for redressal and development. We are putting in a lot of manpower for seamless assistance to the whole project.

Varnali, a resident of Guwahati, did her B.Tech from Bangalore followed by an MBA from IIT Bombay. Presently, the Deputy Commissioner of Assam’s Goalpara district, she took affinity in the administrative affairs of the state after having a stint with a multinational company.

As a schoolgirl, I wanted to be an IAS. My father was a police officer and I wanted to follow in his footsteps. Fortunately or unfortunately, as soon as I completed B.Tech I got a placement where the salary was pretty good. Then, I went on to do my MBA and again got a satisfactory placement. When I was working there, I realised that there was something missing. After putting a few years in the private sector, I realised that I always wanted to give back to society.

As part of a new-generation IAS officer, what kind of changes do you think India needs to stand as a Republic?

Goalpara as an aspirational district: Prime Minister Narendra Modi launched “The Aspirational Districts” programme focussing on developing those districts lagging in key development indicators. The seven districts of Assam shortlisted under this programme must be brought at par with the most developed districts of the nation to fulfil the Prime Minister’s vision of “Sabka Saath Sabka Vikas”.

The fact that Goalpara is termed as an “aspirational district” is because of the ample support it has got from the NITI Aayog. All the initiatives which were taken up in Goalpara were inspired by the 49 Key Performance Indicators (KPI), which includes health services, water resources etc and we are trying to implement them in totality. These sets of KPI are regularly measured and monitored. We try to work according to the indicated sets of KPI.

Development of Goalpara: Goalpara district was created in 1983. However, under the regime of the new Deputy Commissioner, the district is witnessing all-round development.

The development of Goalpara has always been our priority. We started with road constructions, building new stretches, taking up green initiatives to curb pollution, installing plastic shredders for waste management etc. Simultaneously, we have a lot of projects taking place in Goalpara for social welfare and healthcare such as a ‘haat bazaar’ was arranged to guide the rural women recognise the nutritious food and fruits needed especially before and after childbirth. The Mahila Shakti Kendra (MSK) under Krishnai Balijana integrated child development services of the social welfare department. These are the schemes for social development and welfare.

Also, we have won the national award for the “Infrastructure Snapshot App”. This app allows people to take screenshots and snapshots of areas where there are non-functional elements.

Goalpara has become the first district in the state to construct a road using plastic wastes to curb pollution. Of the total 565-km stretch, 237.652 km has been completed using various green technologies. The road is being developed under the Prime Minister’s Gram Sadak Yojana (PMGSY) and is expected to improve connectivity in the district.

Goalpara is already running on the path of its Green Mission. We have received several accolades and awards because of the initiatives we have taken. Goalpara is a far-stretched district with many rural and urban areas under its purview. We are aware of how pollution is gradually taking control of the cities and so we are trying to safeguard our environment and its people using myriad technologies to usher in Green Development. The Ministry of Rural Development has joined hands with us and together, we have implemented green technologies for road construction. To reduce dependence on natural resources, we have introduced several green initiatives such as Waste Plastic Technology, Cell Filled Concrete Technology, Geogrid Technology (Tenax 3D Grids), Interlocking Concrete Pavement Block (ICBP), Cold-Mix Technology etc. The Waste Plastic Technology is an initiative which promotes the use of plastic shredders, to break plastic into granules. Assam is the first state to have implemented the Waste Plastic Technology on roads and it is going to take the district to new heights. Our Chief Minister Sarbananda Sonowal inaugurated this and it is indeed successful in reducing plastic waste in the district.

Although Assam has registered the highest school dropout rate in primary and secondary classes in the country, many students from Assam go abroad or other parts of the country to study.

Off late, the number of higher educational institutes has gone up in Assam. It has happened not only in Guwahati which is the capital but also in other cities. Waving educational grants to set up educational institutions in Assam, we do have schools like Delhi Public School and Royal Global. For higher studies, there is a number of institutions which have shown interest in coming here. Yes, I agree that a large portion of the youths from the North-East go to other places to pursue education out but the situation is improving now and the state government has also become very pro-active.

In the new age of technology, Goalpara is constantly trying to strike the right balance between education and technology. Through our smart classrooms and more number of teachers, we are trying to educate the youth of the district. We are aware of how digital technology can enhance their aptitude and learning experiences. Moreover, smart classrooms promote an interactive learning environment.

Currently, the district literacy rate is 68.27% and we are advancing at a commendable pace. The progress is taking place in education. More and more students are enrolling in education institutes and we are interested in having more colleges.

Digitisation and its impact on the rural district of Assam:

Digitisation is a good intervention because through digital technology we can involve them in a visually-appealing engagement, thus helping them learn better which will help them retain more information. Baladmari High School is a good example. This is the only school where smart classrooms are installed. Also lately, we are trying to come up with “no-teacher” smart teaching concept, where we can make use of the digital platform to help students learn in a better way since the digital platform is a comprehensive one and it comprises several elements. Needless to say, the CSR and Gram Panchayats are doing their part in assisting us to install more smart classrooms and to pave way for the digitisation of education as well. This is indeed a quantum leap for Goalpara.

Advocating stringent punishment for the perpetrator, the Goalpara Deputy Commissioner on combating incidents of crime:

Crime is a serious issue which requires to be dealt with sensitivity. I personally believe that the only way to curb incidents of crime is to have a strong law and order and a well-fortified administration that can catch criminals red-handed and give them their deserved punishment. We try to ensure that juveniles, who are involved in crimes or are unemployed, get employment and have a proper livelihood. The moment they go astray, they tend to commit all types of anti-social activities. Youth and adolescents are extremely vulnerable. For this, I have ordered skill-development programmes. Also, there are several skill academies to upgrade oneself through various means. More and more youths are being encouraged to enrol themselves in higher education.

Today, apart from day to day basis, a major source for influencing minds is the digital world and social media. Everyone today in Goalpara has a mobile phone with an Internet connection. But as a higher authority, we always try to monitor and curb all the wrong things that get circulated on social media. We have strict rules and law regarding the operation of and utilisation of social media and we do thorough scrutiny on them.

We all know that there is a huge demand for authentic products which are made by tribal people. The Khasis, Garos and the Nepalese produce a lot of indigenous products like crockery, pottery, mats and their special attires. As we move towards Guwahati and Shillong, we can get the products but at a very high rate. So on November 20, along with the Anganwadi centre, the Goalmart was also inaugurated by the Chief Minister. The Goalmart is a good platform where people from all across the country can get local products at affordable rates.