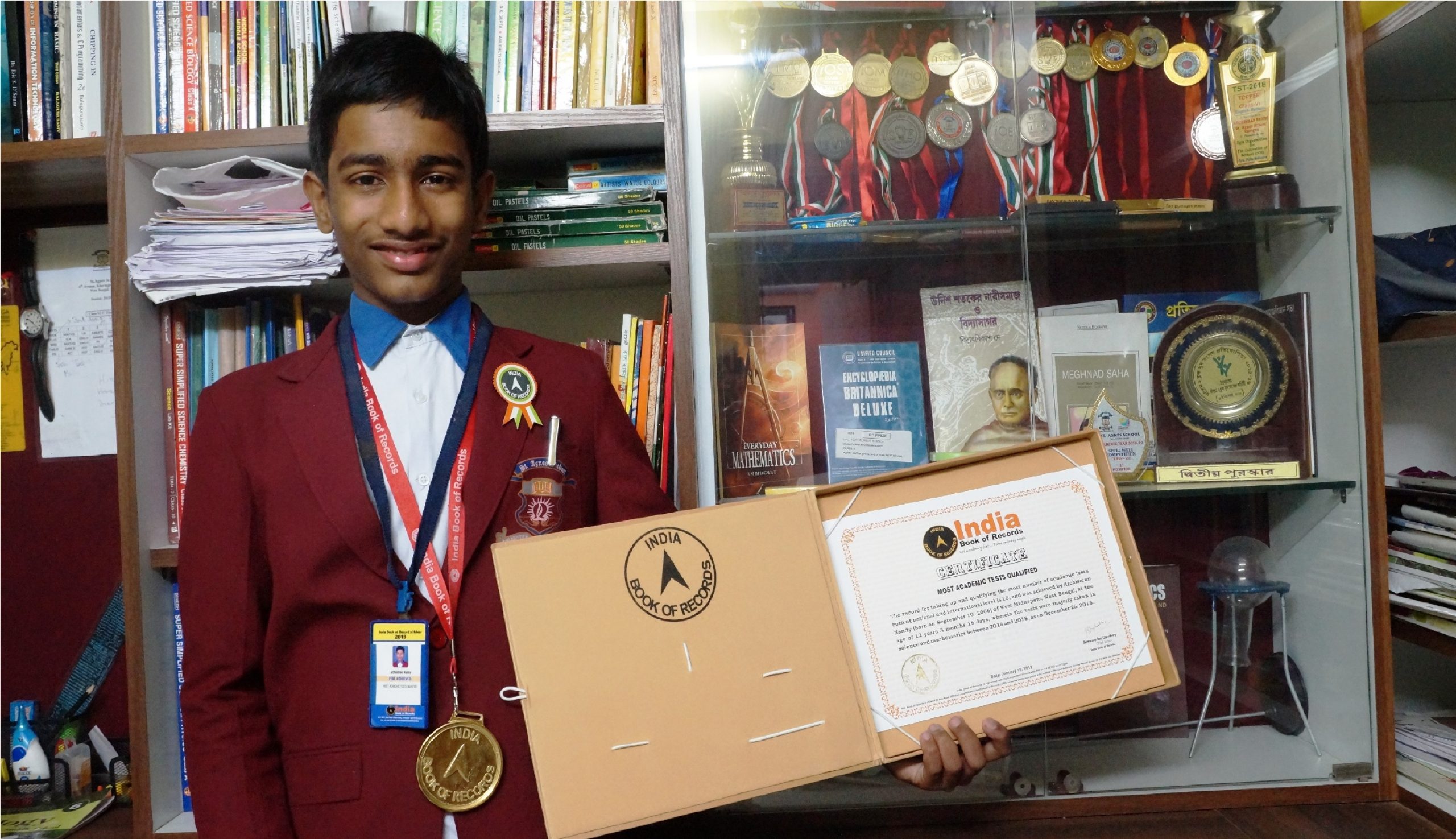 Archisman had already qualified 15 National & International Level Competitive Examinations in Mathematics and Science Subjects when he was 12 years of age. He has qualified in 132 Olympiads including many national and international ones in the domains of Science, English, G.K., Reasoning, Informatics, and Physics. He has secured first rank in IMO and third rank in NSO. “I feel proud when I innovate something in mathematics or when I get significant ranks in mathematics Olympiads,” Archisman said.

In the international sphere Archisman holds a Diploma in Mathematics by Russia’s Peter Great St.Petersburg Polytechnic University. He received Certificate of Distinction, twice, in Australian Mathematics Competition (AMC), and Gold Medal in Thailand International Mathematical Olympiad (TIMO) among several others.

Archisman was raised at Sauri village in Paschim Midnapur before coming to Kharagpur when he was in standard 3. At Sauri he was studying at Sauri Primary School from where the eminent astrophysicist Dr. Narayan Chandra Rana had studied. “I draw inspiration from him,” Arschisman said.

“Initially my mother used to teach me. Since my parents are working professionals I was raised by my maternal grandparents. My maternal grandfather, Bankim Bihari Maiti had first introduced me to the world of mathematics and opened my horizons of knowledge. He also taught me the ABC of chemistry and kindled my interest in science,” Archisman shared. Bankim Bihari Maiti, Archisman’s grandfather is an IIT Kharagpur alumnus from 1970 batch with Masters in Chemistry.

This math wizard does not take private tuition. His grandfather, grandfather’s friends or his relatives usually help him with his studies. “I would also like to thank my teachers, especially Chitta Sir, who taught me mathematics from standard 3. Baren Sir helped me gain expertise in the basics of grammar and Tapan Sir taught me biology. They are my grandfather’s friends. Subhojit da, my cousin used to teach me physics,” he informed.

When Archisman was in class three he started participating in various competitive examinations. Eventually he was admitted to St. Agnes, Kharagpur and started appearing in all kinds of Olympiads.

“In class 4 when I was in St Agnes School my class-teacher Miss Ruby honed my skills in English,” he mentioned.

Archisman has recently presented an innovative formula connected to the Fibonacci sequence at the 9th national conference on Mathematics education organized by the National Council of Educational Research and Training (NCERT) and Regional Institute of Education (RIE), Bhopal. He has devised an innovative pattern along with derivations connected to Fibonacci Series by providing lucid proofs and clear explanations to derive the pattern thereby reducing the complexions and simplifying the Fibonacci formula in solving different problems connected to Fibonacci series.

Archisman’s parents Dr. Mithun Nandy and Anindita Maiti Nandy are naturally elated at their son’s success. “I was surprised that when Archisman was just two years old he could recite Tagore’s Birpurush poem. When I was teaching him English alphabet innovatively using straight lines he picked it up easily and could do mathematical calculations very quickly. I used to teach Science and Mathematics in English from childhood to get him acquainted with the English terminologies which helped him in his transition to English medium school later on,” said Mrs Nandi who worked at Vidyasagar University. “I would like him to be a good human being first and wish he fulfills his dreams and do something for the country,” she added.

Dr. Mithun Nandy has been involved in marketing in a pharmaceutical company for over 17 years. “Since I had to travel often owing to work I used to buy mathematics and science reference books as well as newspapers (meant for kids) for Archisman from various places.”

“I like his sportsman spirit. Even if he loses or gets low marks he does not break down. He is a born fighter. When he is struck with some mathematical problem he tries to solve himself without asking for help even if it takes him around a week to get it solved. Though I was not much involved in his studies from childhood I used to make sure whether the things he is learning from books are connected to his practical life. For instance, when I used to take him out shopping or to buy him chocolates, I used to show him the amount I paid and ask him how much balance I would receive. Archisman would calculate quickly and tell me the answer in an instance. This ensured me that he is on the right track,” the proud father said.

Archisman writes poetry and plays the tabla in his leisure. He plays cricket, badminton and football as well. “Virat Kohli and Rohit Sharma are my favorite players,” he shared. He has a library at home and loves reading books like Feluda and Byomkesh. He also flips through the pages of Gitobitan and the Mahabharata quite often. “My love for recitation, poetry and painting has been inspired by my grandfather who is a scholar in literature as well.” Archisman said.

Archisman wants to study mathematics in future and explore other fields like physics, chemistry and biology and find out their applications in solving modern day problems.

“One needs to think deeply about mathematics if he or she is interested in it. There is no point in blindly memorizing formulas which makes the subject very mechanical. If anyone starts by understanding the concepts he or she will fall in love with mathematics. Also language is a medium and not a barrier. We can be successful if we study in any language,” he signed off.