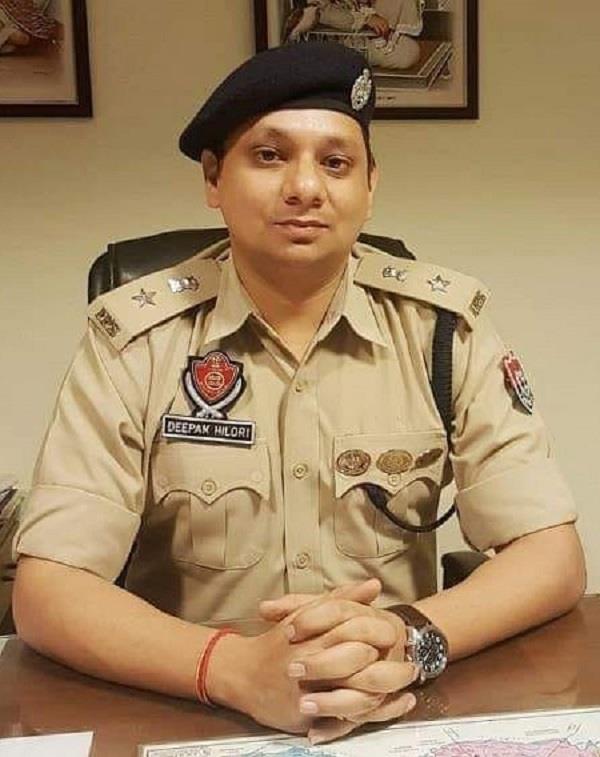 SSP Pathankot IPS Deepak Hilori opens up about the various challenges and possibilities associated with policing. From maintaining social harmony to preparing GenY for new patterns of the force, there are a lot of responsibilities that define the men in uniform. To top it all, an ocean full of duties and responsibilities lie in the coming years.

Balancing the social harmony of a ‘not so demographically balanced state’:

For any state to function peacefully, social harmony is essential. As a part of the Punjab police, we also try our best to ensure cultural harmony and peace. For this, peace committees and similar other bodies have been set up. Several other welfare teams have been constructed to reach out to the masses and communicate with people during any crisis or anarchy. Through social committees, not only harmony is ensured but they also act as a way to increase the scope of communication for better understanding.

A sense of fear or safety:

There has been a sense of fear associated with the term policing and people had inhibitions about its personnel. But the pandemic has changed this perception to a great extent. The real struggles and sacrifices came to the fore and people understood the contribution and commitment of the police personnel towards society at large. During the Covid-infused lockdown when the whole nation was completely shut down, the police force continued to discharge their duties against all odds and at every cost — be it as Corona warriors, martyrs or social workers. People have realised the true potential of these men and their dedication, which brought about a sea change in their existing mindset. Also, several outreach campaigns and social media drives have been arranged to increase awareness in different spheres. It is basically an ice-breaking session for citizens where they began to develop reliance. The motto of the men in uniform has always been to reach out to the maximum number of people and ensure their welfare.

‘Community policing’ has been introduced where society works as a part of the force in ensuring its overall welfare. It is largely for creating a consciousness across communities and bringing about a larger impact on a bigger scale. Society needs to be aware of certain issues and that is where community policing comes into action. Also, community workers get insights and adequate knowledge as to how things function. If they get to learn about any wrongdoing, they can inform the police for further action. Hence, this proves to be a win-win situation for both. Regarded as a part of proactive policing, it also helps in the detection of crimes in many ways and provides a larger perspective in some cases. In the same way, to curb criminal activities and to create awareness, community policing plays a major role.

Over the last few years, Punjab police have seen an increase in the number of women officers. This is a gender-neutral field because in the new recruitment drive, many women Sub-Inspectors have been deployed and several of them are part of the police force. The number is increasing and Punjab police are not gender-centric and have been following this motto for a long time. Often campaigns are done to create awareness amongst the police force and gender sensitisation awareness campaigns are done to promote equality in the workplace.

The trend of digitisation & its rising impact:

Digitisation has had a huge impact on the mode of working during the pandemic. It has changed the way operations happen across all sectors. Punjab police are slowly adapting itself to this new development and needless to say it has been a blessing in disguise for everyone. Awareness is being spread at all levels in schools and communities about cybercrimes and digitisation. Special teams are there to assess cybercrimes and with new features and amenities, it has become easier to catch criminals. Immediate response teams work in perfect coordination and make use of all possible ways to investigate. Digitisation has been a bane but it poses new challenges before the public. It is important to make people aware at this point of various aspects and inform them about the loopholes that will help them to stay safe and protected. Various NGOs and committees have been formed to create special awareness on digital frauds and cybercrimes.

In India, crimes happen according to target groups. Servicemen get trapped through means such as the Internet and other platforms that are regularly used by them based on technology. If the target group is illiterate, then it will be through other modes such as lotteries or similar sources. It is not the demography pattern or location that have an effect on the crime rate but it is rather the type or target group according to which criminals change their modes of operation. Also, the target groups depend on rural and urban areas separately.

Punjab police have set up a dedicated medium to address general issues where people can file a general diary or an FIR and can report any issue related to violence or grievance. Drug addiction is a prominent issue that is simultaneously handled by Saanjh. It is a model which has been set up exclusively to receive complaints from netizens. This is a major responsibility on the part of the Punjab police.

How has becoming an IPS changed you as a person?

Being an IPS is a different challenge. It is a journey that transforms a person inside out and brings about a life-changing experience. When a person is a civilian, his mindset and ways of action are guided by a certain fixed set of notions and thinking is limited to a particular extent. After that very person becomes an IPS, his limits are broken and become boundless. He has new possibilities, challenges and has to go an extra mile to accomplish even the smallest feats that he may not have even contemplated as an ordinary citizen. An IPS always thinks in a broader perspective and his mindset changes from being individual-centric to community-centric with a bureaucratic psyche. With a new orientation, added interactions and new responsibilities, it changes a person’s overall personality.

Policing without force: A myth or reality?

Policing is a service and not a place where people can use force. It is regarded as a part of the civilian police service. But given certain situations, the police have to resort to force to prevent anarchy and chaos. Policing, in general, is community-centric and ensures the welfare of netizens. Policing involves verbal discussions and conversations but the last resort is to use force if things go out of hands. However, these are rare situations when such action is required.

One piece of advice to the future generation of police officials would be to be driven by community-centric measures. Policing should be regarded as a service towards the community. Also, in the upcoming days, policing will be different keeping in mind new advancements and technologies that are evolving. For instance, two prospective areas would be forensic and cybercrime that will pose new challenges before the people. Policing should work on a broader level imbibing different digital strategies. Social media in itself is a new avenue, which is gradually evolving over the years and is bound to open up new avenues of possibilities, bringing about a change in policing.