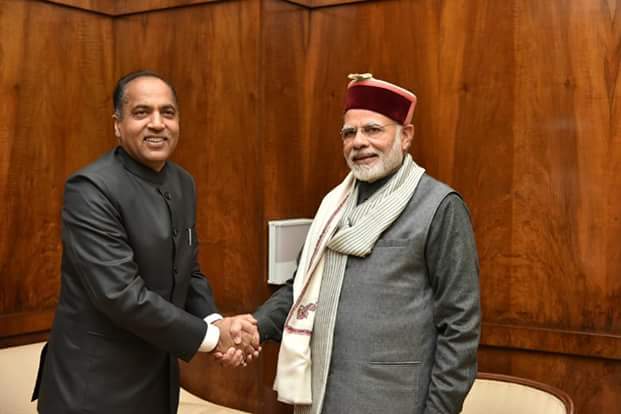 Hamirpur: While claiming that the BJP was marching ahead after the Vidhan Sabha elections in five states, Himachal Pradesh chief minister Jai Ram Thakur said the Congress had no future and would be wiped out from the political scenario of India including his state.

Talking to reporters on the sidelines of the closing function of the four days national-level Holi festival at Sujanpur Tira, Thakur said that in Himachal Pradesh Congress party was doing negative politics but that would not help it in elections. He also said that Congress would have the same fate in his state as it met in the five states where elections were held recently.

He gave full credit to Prime Minister Narendra Modi, and party chief JP Nadda for what the BJP achieved in the recently-concluded elections. Both these leaders were the mainstay of the party in these elections, the CM added.

Replying to a question, he said that there were always possibilities of change but at present, there was no change going on in the state cabinet.

He said that his government was functioning well and would repeat its performance after the 2022 Vidhan Sabha elections.

The CM said that the employees had the right to protest and to seek redressal of their demands but the way the employees were behaving these days could not be understood.

The state government had already accepted almost all the demands of the employees including the recommendations of the Punjab pay scales, the release of old dues etc. and others that would also be under consideration of the government.

Earlier, Thakur presided over the closing ceremony of National Level Holi Utsav Sujanpur in Hamirpur district on Saturday by participating in Shobha Yatra.

Thousands of people dressed in their traditional best participated in the procession of ‘Shobha Yatra’ from almost all parts of the district.

Earlier, the chief minister participated in the Pagri Ceremony and performed Puja at Murli Manohar Mandir at Sujanpur.

Later, the Chief Minister also visited the exhibition at Mela Ground set up by various departments, boards, and corporations and evinced keen interest in it.

While addressing the audience, he congratulated the people for the Holi festival and announced the opening of fully-fledged divisions of the Jal Shakti Vibhag and HP power board at Sujanpur tira amid clapping by the audience.

Demand for this effect was earlier made by former Chief Minister PK Dhumal in his address to the people earlier.

The CM also distributed prizes to winners of various events on the occasion.