Cop who wields a mighty pen 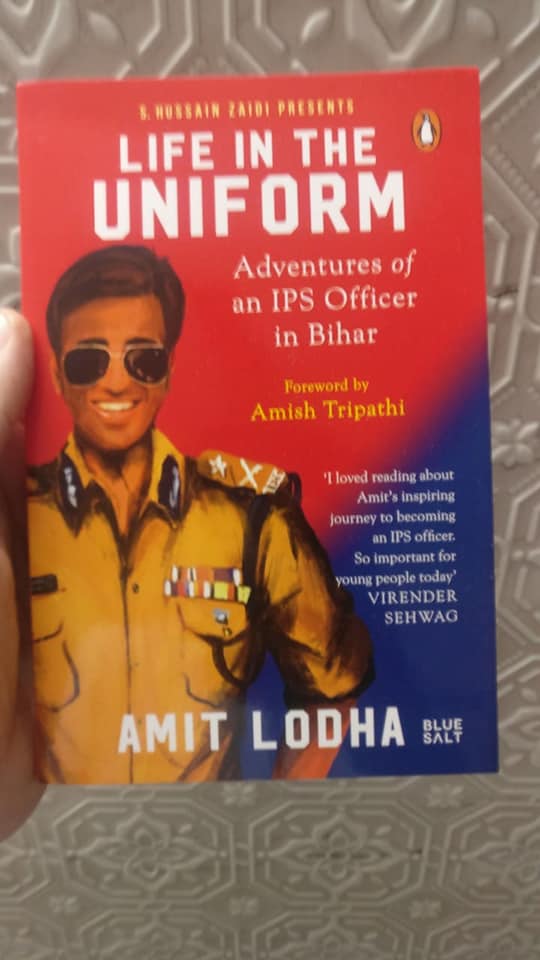 The Inspector-General of Gaya, Amit Lodha IPS, is grabbing headlines for all good reason. The gritty IPS officer from the 1998 batch has found a new way to feed his creative persona. He is presently busy grooming the writer behind the Khaki.  “I always had a knack for writing”- admits Lodha. “But never thought that I would be writing a book”- he added.

Messages and wishes never stopped pouring since the launch of his second book “Life in the Uniform.” His first book “Bihar Diaries” was released in 2018 which was an instant hit and soon it will be adapted into a web series.

In his first book, “Bihar Diaries: The True Story of How Bihar’s Most Dangerous Criminal Was Caught”, Lodha IPS had written about the experiences he had gained while serving as a cop. He had arrested Samant Pratap, one of Bihar’s notorious gangsters known for extortion, kidnapping and massacre of many innocents. It has been published six times and has received raved reviews. Moreover, it has also been translated into Hindi. The well-known Bollywood director, Neeraj Pandey would be adopting it for the silver screen.

Amit Lodha’s second book, “Life in the Uniform: Adventures of an IPS Officer in Bihar” changes the perspective of a common man on police officers. “I want people to experience the life of a police officer through my eyes,” said the IPS officer who flaunts his pen with panache.

Amit Lodha IPS had always been a meritorious student and wanted to join the civil service from childhood. Being a shy child he believed his confidence would get the required boost when he would wear the police uniform. Once he cracked the UPSC and became an IPS officer he got his first posting in the Bihar cadre. Being from Rajasthan, originally, he was skeptic about living in Bihar. However, as time progressed Bihar became his second home. He had been the Superintendent of Police in seven districts. “The best part about Bihar is that a police officer gets absolute freedom to work. There is no interference while working, and if one works honestly and diligently he is adored by people. This motivated me to fight for the right thing,” said Amit Lodha IPS.

Since Amit Lodha was skilled in IT and software he had an advantage in tracking the culprits. Working in Bihar was challenging but interesting as well. He had always been quick at coming to solutions.

A person behind the uniform

People have cultivated a stereotypical idea about the police. “We usually have the notion that policemen are rowdy as they are usually compared with popular Bollywood characters like in Singham or Dabbaang. When such cult figures are created and celebrated in the collective imagination of the masses it creates a negative impression of the police in the minds of the very people whom they serve,” reasoned the IPS officer.

Lodha, IPS, feels it is important to bridge the gap between the common people and the police. “People should understand that a police officer is just like any other person. He too has families and friends. He has hobbies as well. A police officer follows the law and stands by certain principles. We are a reflection of the society we live in,” he added.

During the pandemic when people were not adhering to social distancing norms and police had to enforce the lockdown, it was observed that people started to maintain decorum when police resorted to strictness. According to Amit Lodha IPS, “This happens because people get scared at the sight of the police.”

The quest to change the perception of the men in khaki before the people whom they work for motivated Amit Lodha IPS to pen his second book. His journey shows that cops can do a lot more than policing and maintaining law and order. They can be authors as well.