Creativity and policing: A rare mix 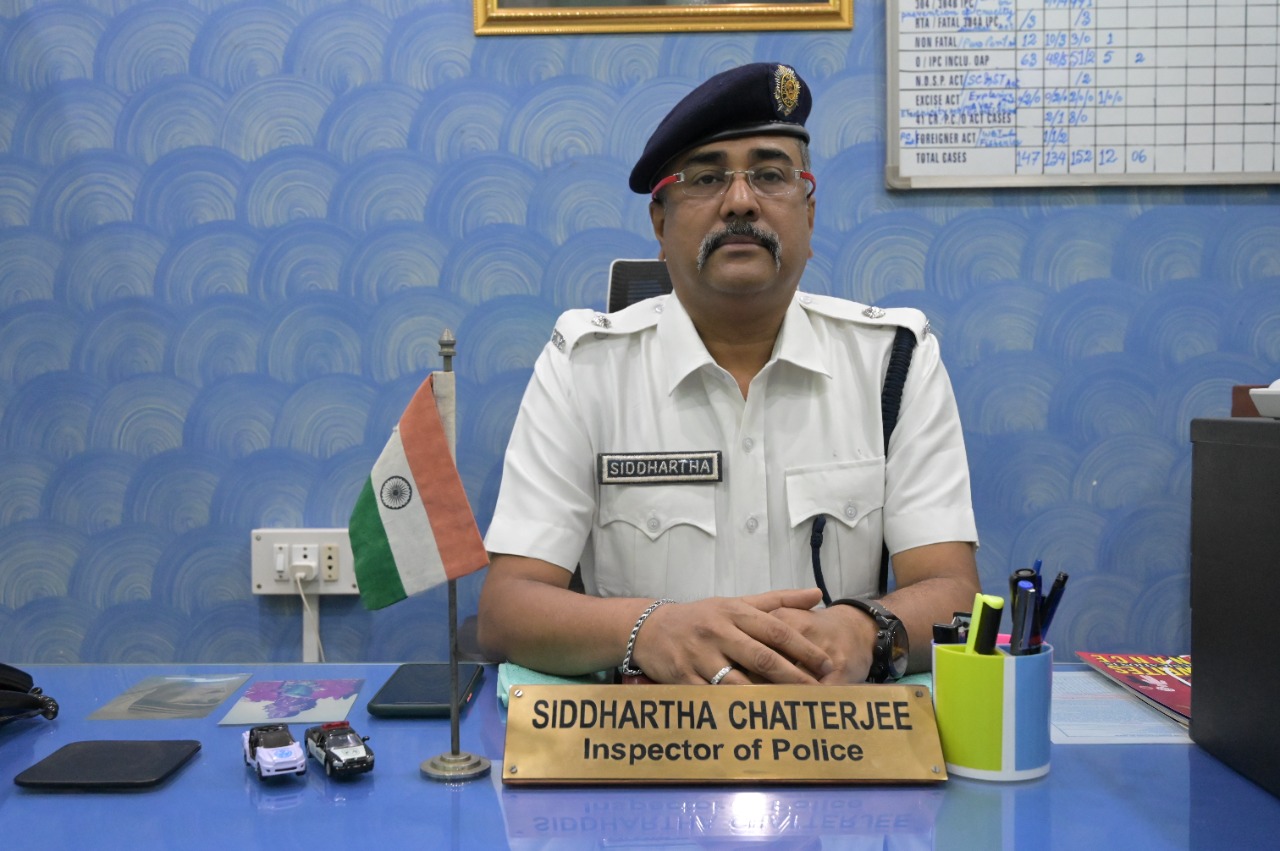 We usually imagine a police station to be a dull space with damp walls, shabby interiors laden in dusty and soiled files.

Sarsuna police station, located at the south-western margins of Kolkata, however, presents a different picture.

Wall magazine titled ‘Sheroes’ showcasing artworks of women police officers and their children is a welcome relief. A small flower garden, colourful little benches meant for children, a bird feeder hanging from a tree at the backyard with vegetables growing on a well-maintained slice of plot — all of it make it all warm and snug — something that is not usually associated with a conventional notion of a police station.

Siddhartha Chatterjee, the Officer-in-Charge (OC) of this creative space, joined Kolkata Police in 1996. He had served at Taltala, New Market, Girish Park, Tollygunge and Kasba under the Central Division. As Inspector, he had been the Additional OC of Narcotics and Bowbazar.

The urge to serve society was always there. Chatterjee is an alumnus of Asutosh College. Initially, he wanted to join the Army but due to economic constraints, he did not get adequate time to pursue his dreams.

However, when he joined the force, his commitment to the job was his priority and he managed to bring in his creativity to the field.

OC Chatterjee has the hobby of collecting stamps and he has aced it as well. He has featured in the Limca Book of Records for collecting the most number of stamps on Rabindranath Tagore. He has collected more than 1,200 stamps on various themes with a special interest in tribal culture while MK Gandhi’s stamp on khadi is also in his prized possession.

Event of the century

“The pandemic has been the most eventful experience for all policemen. We were placing guard rails outside residences with infected patients or segregating those showing Covid symptoms. I had been in charge almost throughout the lockdown.” Senior police officers had stood by the force and fought the virus together. Cops were given energy drinks to boost their immunity.

On top of that, the Calcutta Medical College was declared as a Covid hospital. As a result, patients or ambulances had to be diverted to other hospitals for treatment. This posed an added responsibility. Even in Unlock-1, the movement was limited. Things started improving only since October-November 2020.

As captain of the team, Chatterjee was in constant communication with his men inquiring about their well-being and their families. “Being at the frontline, we need to keep working. So, no one in the team should fall sick,” said Chatterjee. Kolkata Police have lost around 300 policemen due to the pandemic.

Sarsuna is a part of the satellite township. It is relatively calm as far as law and order is concerned. “As the Officer-in-Charge, I am independent in choosing how to execute my responsibilities. So, I cleaned up the backyard and transformed it into a kitchen garden, planted some flowers at the front, started a wall magazine named ‘Sheroes’, including a new project called Human Book Library. It is based on the idea that every human has a story to tell. People assemble in a group, share their experiences and then interact with one another. It acts as an avenue to relieve one’s stress and get motivated.”

Kolkata Police have begun a community approach programme called ‘Jano Sanjog Sabha’ where meetings are held by cops with the local residents of that particular police station.

However, Sarsuna Police Station has gone a step ahead and started door-to-door beat meetings where police officials visit residents and inform them about relevant issues like bank frauds and even play informative audio clips to make them aware. “In 8 days, we have managed to reach out to more than 200 houses,” said Chatterjee. An initiative called ‘Pronam’ has been launched by Kolkata Police as well to ensure the safety and security of senior citizens who stay alone in Kolkata. Sarsuna has a sizable number of ‘Pronam’ members.

“We are also sending short audiovisual clips and leaflets in PDF format to various WhatsApp groups. Residents have given positive feedback through such groups. The more we reach out, the more comfortable they will be to share their problems with us.”

“We have coordinated with Mallika Sutar, a member of Chander Haat — a platform for community-based art practices so that if any police personnel is interested in artwork, he/she can visit the studio to sharpen skills. This will help in intermingling with other groups and form a bonding. These initiatives help in doing away with the negative perception of police in the minds of common people.”

Chatterjee had initiated the concept of the Shero wall magazine when he was posted as Senior Sub-Inspector at Kasba. At Sarsuna, he made use of the vast expanse of the walls so that police officers could display their creativity. Given their busy, stressful schedules, this initiative serves as a stress reliever. “Anyone who sees his or her painting or sketches displayed gains an immense sense of joy. And that is very important,” says Chatterjee.

He also has an interest in filmmaking. Recently, he made a short film documenting how a maidservant helped the cops catch a few criminals in a hideout. He also writes when he is free. He loves watching football in his free time. He is fond of paper cutting as well and has made a scrapbook of his own during the lockdown period. He collects pictures of election graffiti and has a keen interest in the manifestos of yesteryears. Going for late-night shows to theatres with his family is one of his favourite pastimes. “Go beyond the rulebook and do something new on your own,” is his mantra of life. This is how the Officer-in-Charge has been transforming policing through his creativity and innovative methods of communication.

The Model Code of Conduct is applicable to all, including the police force. Some problems that the local police stations need to deal with are political party graffiti, rallies and public meetings.

On public walls, no one is allowed to post. The cops assist civic officials in removing the posters once MCC is in place. In the case of rallies, the police check schedules of rallies so that the same route is not followed by different political parties at the same time. In the case of public meetings, the preference is given on a first-come-first-serve basis.

Women are increasingly joining the police force and creating a gender-neutral ambience. For Chatterjee, it does not matter whether the officer is a man or a woman as long as he or she is committed to his or her profession. Getting the job done should be the priority; the gender of the person is immaterial. Some examples that inspire and motivate:

Mithu Dutta — a lady Home Guard of Kolkata Police posted at Sarsuna Police Station since 2014 — conquered her fears to join the force.

Sampa Malik had always wanted to be a cop since childhood. She is posted at Sarsuna Police Station since 2014. In the beginning, she feared her job but gradually she overcame all possible hurdles. She has been able to balance her personal and professional life with the help of her peers.

Piyali Das has been overseeing the beat meetings. She visits houses of residents of Sarsuna and informs them about cybercrime. “It helps in bridging the gap between the public and the police,” she said. Though there are many challenges involved, she is equipped in handling her personal duties along with her professional work with the help of her fellow officers.

Saraswati Debnath joined the force in 2019. She is also involved in beat meetings. “Visiting people’s homes, providing them with contact numbers of the police station has helped in bringing about a change in perception,” she said. Celebration of International Women’s Day at her workplace was a new experience for her. Though she faced some difficulties in handling her domestic work, it has never been able to undermine her zeal and enthusiasm.

Puja Gupta patrols on the motorbike and keeps strict vigil over eve-teasing. In case of any problem, her fellow officers are always ready to have her back. She looks after her parents at home and fulfils her duties at work with equal ease.

Priyanka Santra joined the police force in 2019. She has been in the National Cadet Corps and loves her job. Her home is not far away, which enables her to fulfil all her domestic responsibilities.