Shivam Dube’s unbeaten 95 off 46 balls and Robin Uthappa’s 88 off 50 balls powered CSK to 216/4, the highest total in this tournament. The 200th match for CSK was studded by the duo’s combined 17 sixes, the most for CSK in an IPL game.

Theekshana got an early breakthrough as he dismissed Faf du Plessis (8). The RCB skipper swung the ball but couldn’t clear the long-on. Mukesh Choudhary got the big fish, Virat Kohli, who was caught at deep square for 1.

Theekshana picked his second wicket in the powerplay as he trapped Anuj Rawat for 12, reducing RCB to 42/3. Glenn Maxwell (26), Shahbaz Ahmed (41) and debutant Suyash Prabhudessai (34) chipped in to take RCB out of troubled waters, but Theekshana and Jadeja picked wickets at regular intervals to further dent RCB’s chase. 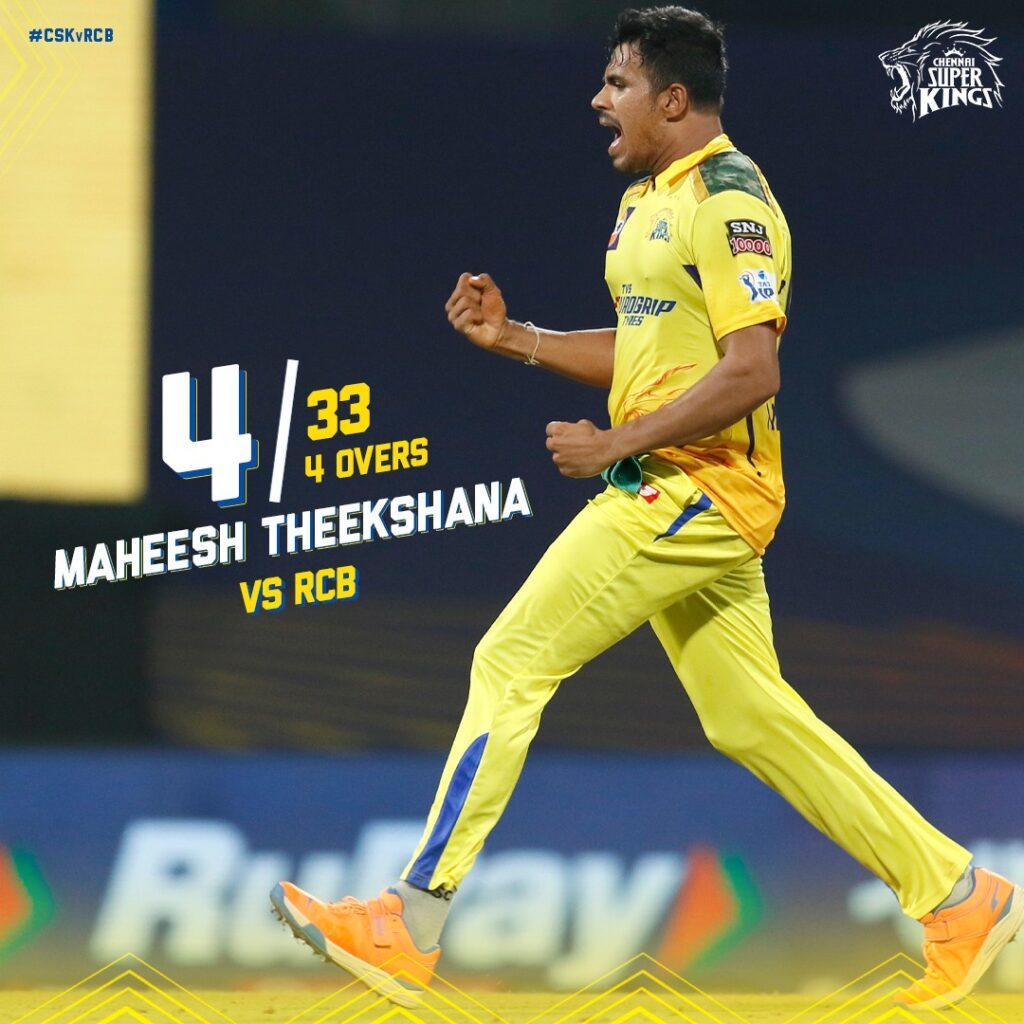 RCB’s last hope Dinesh Karthik, stood strong against CSK. But with the required run rate going up and lack of support from the other end, Karthik fell for 34. His 14-ball innings saw three maximums and two boundaries.

Earlier in the day, Josh Hazlewood played his first game for RCB and trapped Ruturaj Gaikwad for 17 in the powerplay. RCB bagged another wicket, thanks to Prabhudessai’s sensational fielding. Moen Ali (3) left the crease for a run but Prabhudessai’s accurate throw to wicket-keeper Karthik gave no chance to Ali to get back. After seven overs CSK were struggling at 37/2.

However, the incoming Dube and opener Uthappa changed the picture of the match. The duo hammered RCB bowlers mercilessly, with Akash Deep being the most expensive having conceded 58 runs in his four-over quota.

Dube and Uthappa stitched a solid 165-run partnership off 74 balls for the third wicket. Wanindu Hasaranga finally got rid of Uthappa as Kohli caught him at deep midwicket in the penultimate over. The Sri Lankan leg-spinner made it two-in-two as CSK skipper Jadeja was caught at deep midwicket for a golden duck.

The final over saw a loud reception for MS Dhoni, but it was Dube who was on strike.

Dube, who was on 80, effortlessly smashed two maximums to reach 94. While he needed one six off the last ball to register his ton, Dube could manage only a single as du Plessis dropped him.