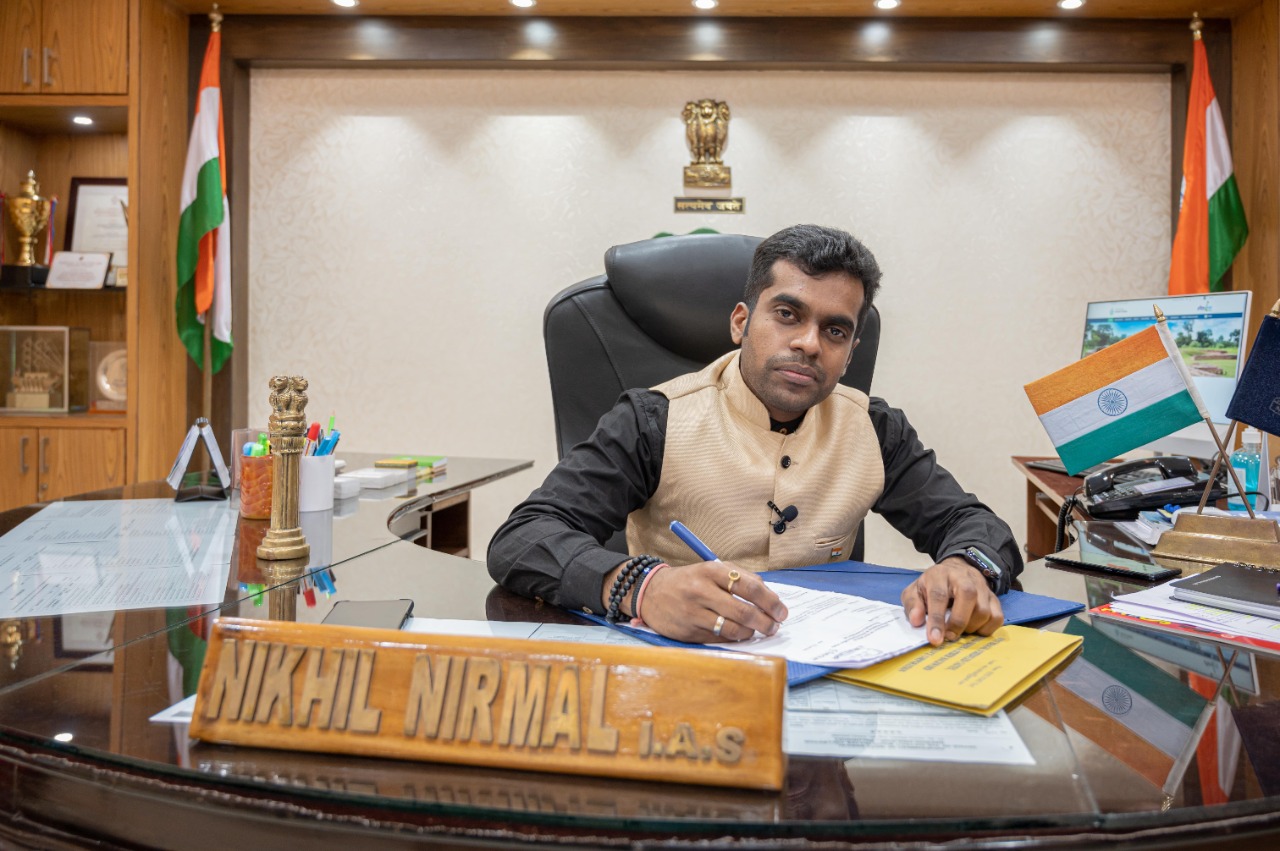 A bordering district in West Bengal having rich folk traditions with most of its population involved in agriculture has many challenges. IAS Nikhil Nirmal, a young and dynamic District Magistrate, is transforming the remote district of Dakshin Dinajpur, which shares a 252-km long boundary with Bangladesh.

While studying law, Nirmal realised that he could contribute to society in a greater way if he joined the coveted civil service. In his first attempt, he got into the Indian Revenue Service (Customs and Central Excise) but in his second attempt, he got his dream job. The sheer diversity of the service was his driving factor. “Serving in the rural heartland of India with farmers, labourers can only be possible with this service,” he said.

Managing the tribal diversity in the district

The Shikhashree and Kanyashree programmes initiated by the West Bengal government has led to improvement in their education levels. The Shikhashree scheme aims to reduce school drop-outs among the Scheduled Caste and Scheduled Tribe children. ST students from Class V-VIII are eligible to get a one-time grant of Rs 800. Under Kanyashree Prakalpa, annual scholarships of Rs 1000 are provided to girl children of 13 to 18 years of age. They also receive a one-time grant of Rs 25,000 when they turn 18.

The health parameters of the tribals have also improved. Presently, there is 99% institutional delivery amongst tribals. Malnutrition has reduced as well.

Tribal Helpdesks have been set up in BLROs (Block Land Reform Offices). If any complaint is not related to land issues, they are forwarded to the concerned departments. Around 8,300 pensions have been given under the Jai Johar Bandhu Prakalpa — a tribal pension scheme.

Dakshin Dinajpur has a Kala Azar endemic village, Nambhoil in Kushmandi block. It is populated by 100% tribal population. Fourteen cases of Kala Azar were detected two years ago. Since Kala Azar is caused by a sandfly found in mud houses, proper housing is provided to villagers under Gitanjali and Bangla Awas Yojana initiated by the West Bengal government. With regular health camps and house spraying programmes being held, the village has reported only one case recently.

Dakshin Dinajpur has a 252-km long international border with Bangladesh, 25 km of which is unfenced. There are 6 BSF battalions posted in the district and 71 border outposts.

The district administration holds regular border liaison meetings with BSF commandants. There are minimal cases of infiltration in the district. In the case of underage infiltrators, mostly boys, who may have come to India accidentally, Subhayan Home, a government-run institution, has been set up. They are helped in their repatriation process by taking it up with the Home Department and the High Commission.

The District Magistrate held video conferences on a weekly basis with the Election Commission of India (ECI). Protocols to ensure social distancing for the voters as well as polling personnel were framed. To ensure social distancing, the ECI mandated a reduction in the number of voters per polling station to 1,000, as a result of which the number of polling stations increased from 1,305 to 1,755. Minimum facilities like electricity, water, separate toilets for male and female were ensured in each of them.

For the first time in Dakshin Dinajpur, 65 women polling stations were set up. Various confidence-building measures, including route march with the CRPF, were held.

Dakshin Dinajpur is largely rural and agrarian. It is the second-largest producer of rice in Bengal after Burdwan. There are eight blocks located in the rural belt with three municipalities (Balurghat, Gangarampur and Buniadpur) in two subdivisions. “There are many peri-urban areas where there is no big gap between a rural and an urban area,” Nirmal adds.

Balurghat has a large number of schools and hospitals. “The facilities available in Balurghat are first class. People come to Balurghat to avail them and return to their hometowns as well,” he says.

Fluorosis is a cause of worry among people residing near the banks of Punarbhaba and Tangon rivers, in the blocks of Harirampur, Banshihari, Tapan and Kushmandi. Regular health surveys at the community and school level, distribution of antioxidant capsules and calcium tablets, drinking water facilities provided by the Public Health Infrastructure Department, IEC (Information, Education and Communication) activities by ICDS, Anganwadi and ASHA workers has helped in reducing the case burden.

In 2019, the district witnessed a dengue outbreak with a total of 1,234 reported cases. “In 2020, before the Covid outbreak, we ensured proper cleanliness and sanitation through our vector control teams and village resource persons,” says Nirmal. In 2020, the number of cases went down to 35. At present, not a single dengue case has been reported.

Currently, Dakshin Dinajpur reported only 2 active Covid cases. However, Nirmal says: “Things were not so rosy before.”

At the peak of the pandemic, the highest single-day rise in Covid cases was 250. A total of 15 Safe Homes were set up with active support from the Health Department and the police. On top of that, the district faced the influx of thousands of migrant labourers coming in from different parts of India. “We received phone calls from labourers stuck at different places; we coordinated with the district administrations of different states and ensured that their basic needs were met. Natok Utkarsha Kendra, a drama academy not yet inaugurated, turned it into a 100-bedded Covid facility overnight.”

Mild symptomatic and asymptomatic patients who could be treated at home were provided with Covid kits containing zinc and Hcqs tablets. A district control room was set up from where every Covid patient was contacted at least twice a day.

Around 90% of health personnel, police force, frontline workers have been vaccinated. Inoculation for senior citizens and those with comorbidities between 45 and 60 years of age is also in progress.

Looking at the vibrant handloom industry

The Gangarampur sub-division in Dakshin Dinajpur has a vibrant handloom industry. Weaver Mudra Loans are provided to the non-loanee farmers. A Comprehensive Handloom Development Project has been launched to provide improved accessories and machinery to the weavers.

The West Bengal government is also providing marketing facilities through schemes like Bangoshree, Tantuja, Manjusha. Sarees from Gangarampur are also procured by the West Bengal Disaster Management Department that are provided during calamities.

Bringing governance to the doorstep

Nirmal says: “Duare Sarkar is one of the most revolutionary and perhaps the single-largest service delivery programmes in the world envisioned by the West Bengal state government.” Around 724 camps were set up across the district through which 72% of the total population of the district were covered making it secure the first rank in terms of its performance.

Around 2.8 lakh applications were received. Around 97,000 Swasthya Sathi cards were issued along with 70,000 caste certificates for OBC, SC and ST people being given in three months.

“We were able to provide hearing aid to a deaf girl, wheelchair to a disabled person, MGNREGA job card to a migrant labourer who had returned to the district after Covid,” Nirmal says.

Empowering the girls of tomorrow

Many girls in the district have been empowered through the Kanyashree scheme run by the state government. Project Pragya — a breast cancer awareness programme — has been taken up under Kanyashree for girl children above Class 10 and those going to colleges so that they can spread awareness in their homes.

Project Lakshya has also been devised under which girl children enrolled under Kanyashree can receive the best possible free coaching facilities of IIT or Joint Entrance and NEET examinations. Nirmal says: “Since the district is so distant, girls had the hunger to crack competitive exams but were not getting the best coaching facilities. Today, 7 of them cracked the West Bengal Joint Entrance examination and got rank within 10000; one of them cracked the All India JEE too.”

Menstrual hygiene has also been a priority. The district administration has installed sanitary pad vending machines across 30 schools. Women Self-Help Groups have been trained in making sanitary pads with one of them providing them free-of-cost to many of the schools.

IAS offers a broad canvas where one can interact with the public, make small changes in their lives and go into the nitty-gritty of various schemes. The sheer ambit of the service is boundless. The charming District Magistrate of Dakshin Dinajpur, who is currently in his 10th year of service, says: “My leadership abilities have been augmented, my man-management potential has increased, my team-building capabilities have enhanced and I have also learnt to multi-task.” As the District Election Officer, he has been involved in many statutory activities. He is overseeing the Covid vaccinations at the same time. With his new-age governance strategy, he is changing the face of the far-flung Dakshin Dinajpur district.