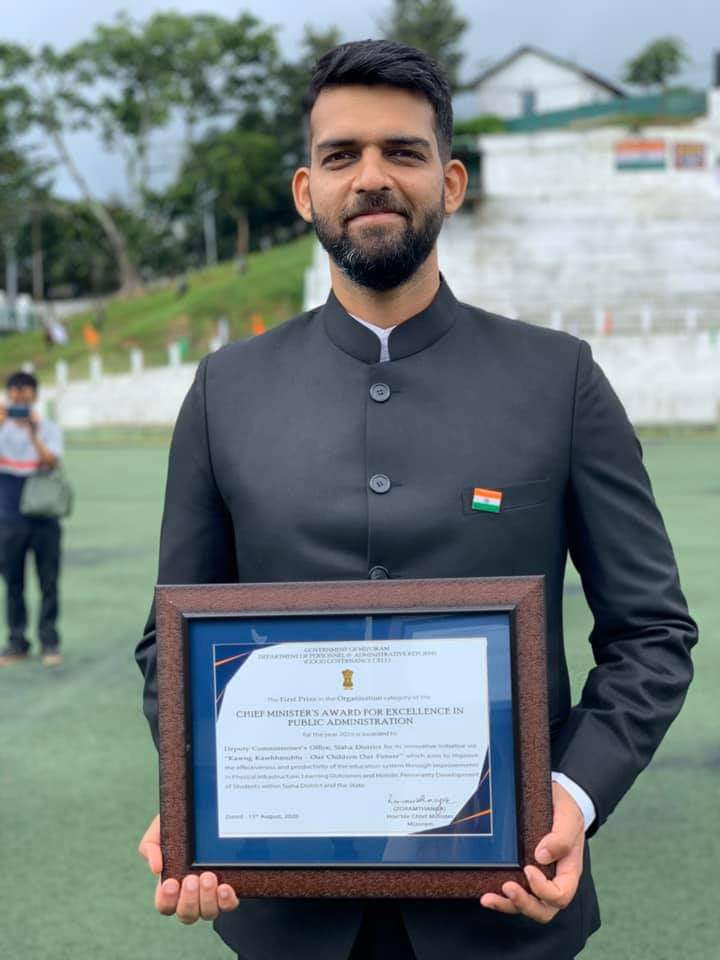 Siaha, in spite of being the capital of the Mara Autonomous District Council, remains one of the most backwards districts of Mizoram. Education system here is extremely poor and children lack basic learning skills, important for performing well in higher education. Most government schools are backward and lack infrastructure needed to stimulate children’s learning outcomes.

During his visits to the schools, Bhupesh Chaudhary, DC Siaha, realized that some of the teachers were following an outdated methodology, where children were made to follow rote learning which failed to motivate or encourage them.

Luckily for children of Siaha district, rescue came in the form of an enthusiastic person- DC, who introduced the project “Kawng Kawhhmuhtu” which roughly translates into Mentorship Programme.

According to Bhupesh during his visits to the schools, he saw that the teachers lacked understanding of topics they taught. This triggered him to change the system and introduce smart classrooms. “Kawng Kawhhmuhtu” is an umbrella programme which has many components for the holistic development of students. The project focuses on the latest learning contents to make learning a fun and enjoyable affair,” enunciated the education enthusiast.

The project primarily involves three components. The first is including Smart Classroom which involves equipping classrooms with the latest contents of educational materials. Bhupesh and his team selected sic government schools, and each school was equipped with two smart classrooms. The cost for each smart classroom was 2.5 lakhs and the funding came from Gas Authority of India Limited (GAIL). The company has so far paid for 12 such classrooms.

The smart classrooms include an overhead projector with sound system and a computer loaded with the learning components. The system also enables teachers to track the progress of the students. The introduction of new methodology meant that the teachers were adequately trained to execute it. Luckily for Bhupesh, support came from the DC of the neighbouring district Lawngtlai, where his wife Shashanka Ala is posted as the DC.

At the behest of Shashanka Ala, an organisation named Extramarks Foundation implemented the training of the teachers.

“My wife and I shortlisted some of the best teachers from Lawngtlai and Siaha and we recorded their lectures in Mizo with English subtitles. A mobile app called EduFix was also launched where the lectures of teachers were made accessible. Eventually, with the help of Mara Students Organisation, the app became a popular source of learning among students, especially during the lockdown,” notified Bhupesh.

The second component is building libraries for the schools. Being aware that most government schools lack libraries and students do not read books outside of the prescribed curriculum, Bhupesh felt the need for a library in each school. It is pertinent to note here that the medium of instruction being Mizo, students here face hardships during examinations as question papers are mostly set in English.

Recognising the importance of exposing students to English language, Bhupesh and team proposed the plan of creating libraries for 20 schools. The plan was sanctioned and in a short span of time the libraries became a reality thanks to GAIL and BEL who funded for ten libraries each.

The libraries were soon filled with the latest books in science and technology; including some delectable collection of classic literature. “I feel the books will be of great benefit for the well-rounded development of the students,” Bhupesh enthused.

The third component of the project includes providing sports facilities. Sadly youths of the district are known to be involved in delinquent behaviours which are clearly a sign of the pervasive boredom they deal with. “We felt that channelising the youthful energy into sports would save them from getting into drugs and other substance abusers, and so decided to equip schools with various sports activities,” he added.

The Kawng Kawhhmuhtu project has become such a roaring success that Bhupesh Chaudhary was conferred the Chief Minister’s Excellence in Public Administration in organization category, this Independence Day,.

In added good news, with convergence of MGNREGA, selected government schools are now being provided with volleyball and basketball courts, while the plan to increase courts in every school is in the pipeline. The school buildings are also being improved under DADP schemes.