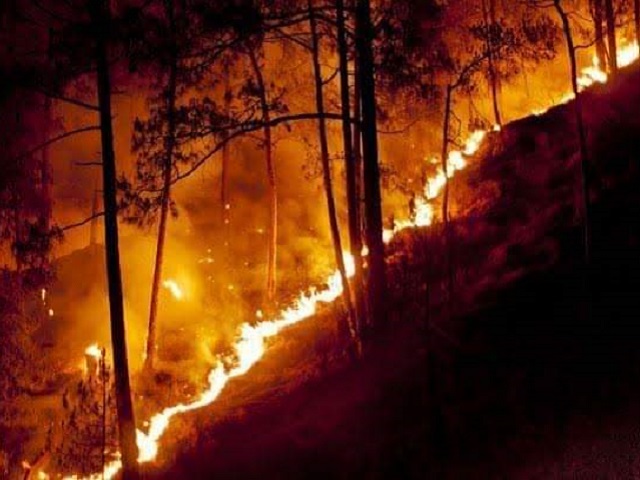 Forest fires have been making headlines last week as a massive fire outbreak was reported by the Uttarakhand Forest Department. Around 2800 hectares of forest cover have been affected in over 2000 forest fire incidents reported across the state.

The Optimist team got in touch with some experts to decode the causes behind forest fires, the challenges involved in dousing them and how to tackle such incidents in future.

The rise in temperature and strong winds after a prolonged dry spell led to forest fires in many areas of Uttarakhand last week which proved difficult to manage. Hence two helicopters were deployed by the Air Force along with a team from the NDRF.

Dharm Singh IFS is the Divisional Forest Officer of Tehri Garhwal at Uttarakhand Forest Department. He was one of the nodal officers coordinating the operation at Garhwal. “The winds made it difficult for us to reach the stretches. After the major fire incidents were tackled, fire watchers deployed from local villagers belonging to Van Panchayat helped in tackling the small fire incidents,” he informed.

“There are three factors that lead to fire: fuel load, oxygen and temperature. It is not possible for humans to manage temperature and oxygen, so we can only manage the fuel load,” Dharm Singh IFS explains.

Most of the forest fires are human-induced. Farmers burn crop residue in the evening and leave the fire unattended. From mid-February to mid-June, dry climate and burning of agricultural waste lead to such incidents as forests are mostly located close to agricultural lands. Massive awareness campaign is being planned to do away with the myths in the mind of villagers. “We need to reach out to people and make them understand the losses incurred due to forest fires and involve them in our activities,” said Dharm Singh IFS.

Though erratic climatic conditions would lead to an increase in frequency of forest fires in future, the Uttarakhand Forest Department is equipped with the latest technological tool like the SNPP-VIIRS 375 system, introduced with the collaboration of NASA and ISRO and an efficient information dissemination system. However shortages in manpower, vehicles and less budgetary support are some of the impediments that need to be fixed.

Uttarakhand has a long stretch of subtropical chir pine forests, a deciduous tree that sheds its leaves in the months of May and June. Dr. Patil explains the science behind large scale forest fires in Uttarakhand. “The middle stretches of the Middle Himalayas are covered with chir pine which sheds its pine needles every year which are inflammable. There is no understorey beneath. The ground is covered with dry grass during the dry season. So when the amount of fuel load becomes very high and when people by accident light fires it burns on a large scale. This cycle repeats every 3 to 4 years,” she said. The last time large scale forest fires were reported in Uttarakhand was in 2016 and before that in 2012. “In 2016 the intensity of forest fire was most intense, prior to that, in 1995, it was also quite intense,” she added.

In 2020, on account of the lockdown there was minimum human activity. There were instances of rainfall every 2-3 weeks last year, so the grass was green and no forest fire incident was reported last year.

This year there was no winter rain. Normal monsoons witnessed a 33 percent deficit in rainfall. Thus the fire incidents in all the districts of Uttarakhand were higher. Due to shortage of staff, the Revenue Department, the Police, the NDRF teams and the Fire Department had to come to aid. Also, the helicopters sent from the Home Ministry could not operate in Kumaun due to low visibility.

Forest fires are usually dealt with at the government and bureaucrat level. However private agencies are now showing interest to contribute to this environmental hazard as well. Hemant Khadse is a Fire and Life Safety consultant and the Group CEO of East Corp which provides engineering and technical assistance to industries.

“The private sector is generally not interested in forest fires because the number of casualties is less. However forest fires are catastrophic in nature and have large environmental repercussions. At East Corp we acknowledge the responsibility to contribute to society at large,” he said.

Risk-assessment and training are the two methods by which East Corp helps industries douse fire. “It is important that industries take forest fires into consideration while doing their risk assessment. We often fight fire at the power plants and other industries which are located outside urban centers amidst forested areas. As a consultant, we do not limit ourselves within the plant but outside as well. We focus on training and generating awareness so that people are empowered to respond in cases of wildfires,” said Hemant Khadse.

While speaking about the tools that are effective in dousing forest fires Hemant Khadse said, “Most fires break out due to human intervention. So prevention is the most effective and foremost tool to combat forest fires. The next step involved is the detection of the fires. India is undergoing digitisation of the forest areas with the help of fire watch-towers, telephone lines and satellite-based detections which have proved to be effective. As far as combating fires are concerned, we are technologically strong by taking fire tenders from nearby vicinities and getting help from trained firefighters who are equipped with specially designed suits, hand-tools and guns.”

Climate change is a factor that has disturbed the ecosystem. The water cycle has been negatively impacted. The change in distribution and intensity of rainfall has led trees to shed a lot of leaves that serves as fuel for forest fires. Moreover weedy plants at the lower altitude tend to catch fire easily.

Dr. Anil Prakash Joshi, a Padma Bhushan awardee, is a green activist and the founder of the Himalayan Environmental Studies and Conservation Organisation.

“It is not practically possible for the forest officials to combat forest fires given their limited manpower. In the past, villagers used to come together to fight forest fires. They also used to collect forest litter and use them for making compost. However, at present villagers have lost the sense of belonging with forest,” he said.

“Since the forest quality has not improved in the last few decades it is time to revisit our National Forest Policy which was formulated in 1988. Forest Committee rights should be reinstated to enable community participation in conservation efforts. There should be plans to collect and convert forest litter into renewable energy. Water holes need to be dug to recharge water bodies which can enhance the moisture level of the soil,” added Dr Joshi who has also penned down his concerns in a letter to the Prime Minister as well.