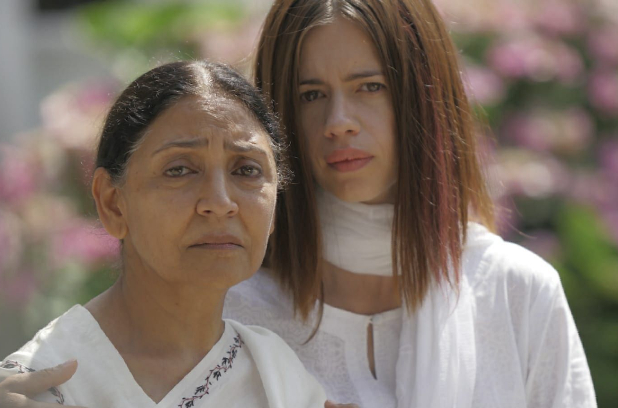 Goldfish, an English language film directed by Pushan Kripalani, starring senior actress Deepti Naval and Kalki Koechlin is all set to have its world premiere at the 27th edition of the Busan International Film Festival (BIFF). The film is part of ‘A Window on Asian Cinema’ section of the festival, which will be held from October 5-14.

Goldfish deals with memory and identity. Apart from Deepti and Kalki, who play the lead roles of mother and daughter, the film also stars the prolific actors like Rajit Kapur, Gordon Warnecke (lead in My Beautiful Laundrette), and Bharti Patel (featured in BBC series Doctors) in pivotal roles. Anamika, the child of a mixed marriage, returns home to her estranged mother Sadhana because she is suffering from the onset of dementia. Ana returns to a neighbourhood she barely remembers, to a woman who sometimes doesn’t remember her.

Set in London, Goldfish is a UK production and is produced by Amit Saxena’s Splendid Films (USA) and executive produced by Pooja Chauhan. The film had its market screening at Marche Du Film (2022) and was part of the First Cut Plus lab in association with Karlovy Vary Film Festival.

For Deepti, the story of Goldfish was an instant connect. “When I first heard the story of the film in three lines, I immediately connected with the film. Something inside me said, this is for me, this is what I have been waiting for. Maybe because I saw my mother go through Alzheimer’s and dementia. I am really excited about the selection of the film at Busan International Film Festival and I am sure the audiences will take the story of Sadhana and Anamika with them in their hearts,” said the Chasme Badoor actress.

Kalki is both excited and humbled that Goldfish will premiere at Busan. “The film’s cast included Indians from all over the world and all these actors had their own accents, which is something we’ve never seen in a film – the diversity of Indian accents and therefore of the people of India,” said the Zindagi Na Milegi Dobara actress.

Excited about the premiere, director Pushan Kripalani said, “Goldfish explores the ideas of identity through two women. One is unsure of who she is because she lives between two cultures, neither completely her own, and the other, stuck in a land not her own, now because of her disease, with her identity ephemeral. It seeks to address the ideas of duty, love and painful history. We are delighted and honoured to be part of the Busan International Film Festival. We hope people relate to the themes explored and we look forward to presenting our film. We are eager to meet our hosts and form new friendships.”

According to executive producer Pooja Chauhan, Goldfish is about belonging. “It’s about being able to call a place your own. It’s about good things and bad things, and everything in the middle, where life is lived. Where tragedies are small and epic, all at once,” she said.
Amit Saxena, director of Splendid Films and producer believes getting selected at Busan is a “great validation of the team” and the hard work everyone has put in.