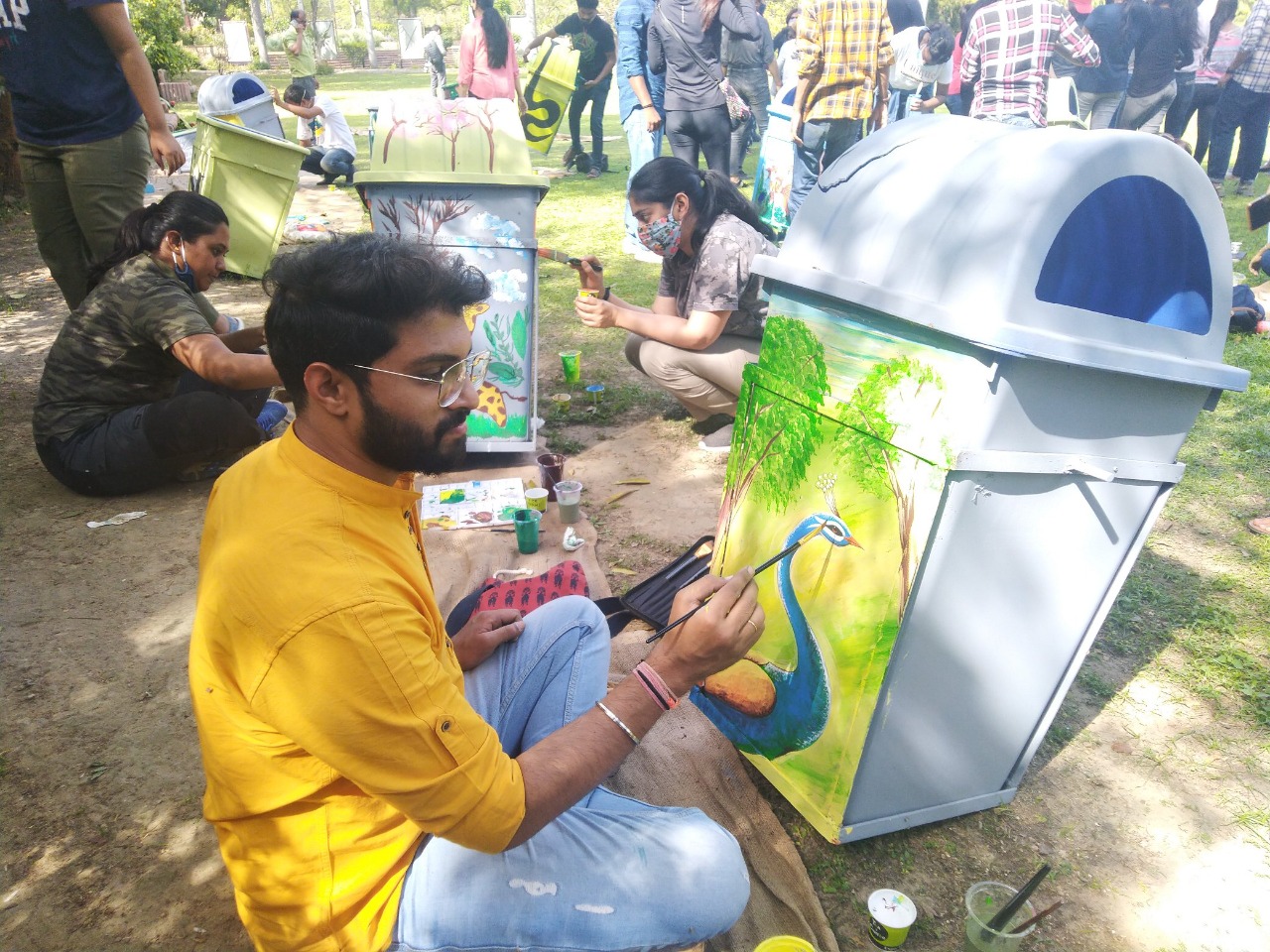 The Delhi Zoo is slated to open to the public on April 1, 2021 after a year. However, all this while the zoo was getting a new creative makeover. With murals of a monkey wearing a mask at the entrance, colorful bins, COVID-safety precautions, and online tickets, energetic zealous Director, Shri Ramesh Pandey IFS and team, are all set to welcome visitors soon.

Over the last weekend the National Zoological Park authorities collaborated with Delhi Street Art, an organization that designs, creates, restores aesthetic heritage of public spaces, to get 40 dustbins painted by 70 odd volunteers. “The dustbins were blue in color. The colour had lost its sheen and was also not synchronized with the dominant color of the landscape. Since we had no time to replace them, we came up with this idea,” said Ramesh Pandey IFS.

Delhi Street Art (DSA) was founded in 2013 under Yogesh Saini who is an entrepreneur with interest in art, design and other creative endeavors. The contributing artists came from a diverse background including doctors, engineers, designers and photographers. DSA started their first project by painting the garbage bins of Lodi Gardens. Today, they work in more than 15 cities including Mumbai, Bengaluru, northern parts of Himachal Pradesh and Uttarakhand.

Opening up to visitors

The Delhi Zoo was shut down on account of the pandemic last year. However when the lockdown was relaxed and public spaces were allowed to open including other zoos in the country, the Delhi Zoo was kept shut on account of bird flu surveillance. “Arranging feed for the animals had been a problem in the lockdown. Now we are coping up and once opened we will have to monitor the situation and plan subsequent courses of action,” informed the Director.

“The zoo is a place that promotes education and conservation of wildlife among the general populace. So enhancing the aesthetic appeal of the zoo assumes importance,” he added.

Being creative in approach

The Delhi Zoo authorities got in touch with Delhi Street Art when they were planning on beautifying an enclosure surrounding a banyan tree. On the occasion of World Wildlife Day on March 3, a wall art event was organized to commemorate over 60 years of the establishment of the Delhi Zoo which has been continuing its conservation efforts from the heart of the national capital. A staircase that was used for riding on the elephants was given a new avatar with bright colors. “Since it was located at a prominent place it was an eyesore to the entire site. We were thinking of dismantling it. However, with the active support of Delhi Street Art members we got the idea that any structure that is visually unappealing can be taken care of and beautified using nature based paintings,” said Ramesh Pandey IFS.

The National Zoo authorities are interested in more creative projects involving miniature paintings and intricate artistry in future. Painting workshops involving volunteers are also planned so that visitors who are interested in painting can participate. “It is probably the first time that public art is being promoted in an innovative way by a government body. This has given a new dimension to the way street art has been perceived so far,” said Yogesh Saini.

Zoos are often tainted as a space where animals are held in captivity. To do away with such misconceptions and to promote the space as a hub of education, conservation and scientific research where people can engage with wildlife at ease, the Delhi Zoo authorities have turned creative in their approach.