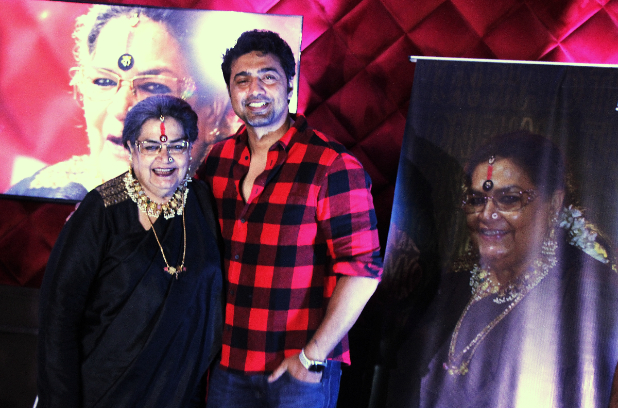 The last time Usha Uthup and Dev met at the iconic Trincas, the legendary singer had said how she would want to do a film with the Bengali actor. Well, that didn’t materialize but her song Chumbok Mon in Dev’s recent release Kacher Manush was highly appreciated. The mutual admiration between Usha Uthup and Dev was palpable. So, when the veteran pop artiste decided to launch her Bengali singer, Mon Manchhe Na Aar at Trincas, she knew she had to have Dev by her side.

“It is a nostalgic moment for us because Usha Di had recorded her first Bengali Song Aha Tumi Sundari Koto Kolkata in her rich melodious voice with Hindusthan Record in 1978. After 44 years, we are reuniting and releasing a brand new Bengali song of hers. Listeners, no doubt, will love this song in Usha di’s timeless voice”, said Riad Dipanjan Saha, CEO, INRECO, Hindusthan Record. Written by Rajib Dutta and composed by Suvajit Ray, Mon Manchhe Na Aar is a poetic rendition of a love story deep in nostalgia.

For Usha Uthup, who made her first performance at the Trincas in 1969, it is like a homecoming. ” It is sort of a homecoming for me with INRECO &amp; Hindusthan Record. It feels wonderful to sing this beautiful song for them. I am forever thankful to my music composers, lyricists, audio companies, producers and above all, the listeners, for still showering their love on me and making me sing new songs. I am also thankful to Dev, for coming over to share my joy,” said the Padma Shri winning singer.

Established in 1932, Hindusthan Record has travelled across the years, creating music, and marking milestones. Its history is infused with several achievements like the one on April 5, 1932, when Rabindranath Tagore stepped into Hindusthan Record’s building to inaugurate the studio. Thereafter, he went on to record one of his own compositions on the same day.
Over the years, several icons such as Atul Prasad Sen, Pankaj Kumar Mullick, Ustad Faiyaz Khan, Ustad Bade Gulam Ali Khan, Anupam Ghatak, KL Saigal, SD Burman recorded here.