DGP RP Upadhyaya: The harbinger of change in policing 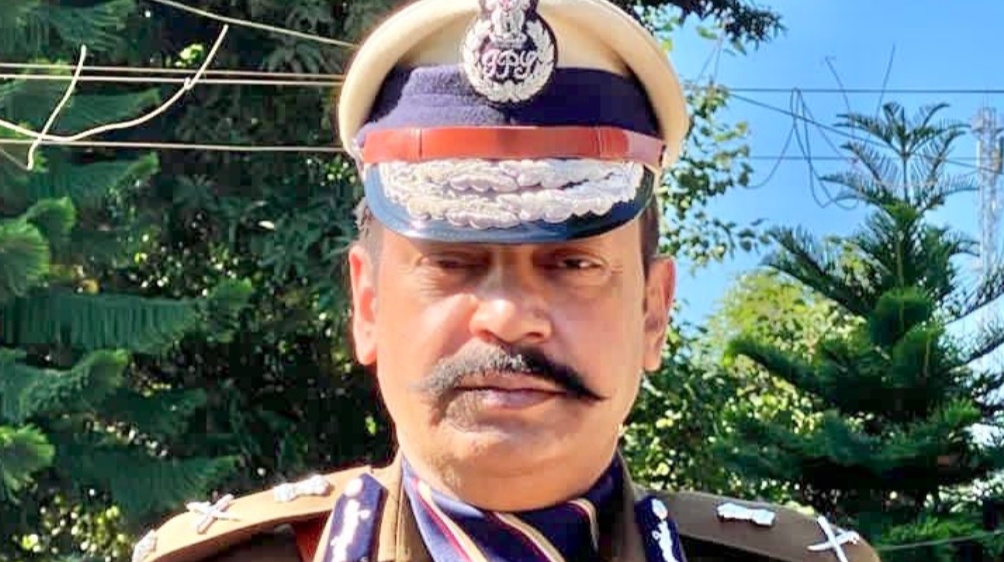 In its efforts to combat crime better, the Arunachal Pradesh police are aggressively using new-age technology, from the Arunachal Suraksha App to using drones for surveillance, headed by its chief R P Upadhyaya.

Describing himself as a fitness freak, the 54-year-old Director-General of Police stresses the importance of keeping fit as he, along with his team, fights the global pandemic from the front.

“I call myself a fitness freak as I love doing exercises, yoga and playing badminton during my leisure time.”

From sharing borders with Myanmar and Tibet, and the threat of Chinese intrusion looming large, the Arunachal police have a herculean task alongside the Indo-Tibetan Border Police (ITBP) to keep a strict vigil.

A unique feature is that India–Myanmar border has a Free Movement Regime (FMR) which allows tribes living along the border to travel 5 kms across either side without visa restrictions. To keep a tab on any unwanted movement, Arunachal Pradesh police have started aerial surveillance through drones in several areas. The digital surveillance technology is used as a force multiplier to serve the public better.

“Our only border is with Myanmar. China and Bhutan borders are well-protected. The terrain is quite inaccessible and there is no history of people crossing from each side but the Indo-Myanmar border has a Free Movement Regime. One can go 5 km to either side, posing quite a challenge for the police force. We use drones in such cases along with a village volunteer force so that they can intimate us immediately if they see someone new in the area.”

When it comes to using technology, the hi-tech police of this tiny state proofs the law is in safe hands. The Arunachal Suraksha App is an Android mobile app developed by the Arunachal Pradesh Police Department in collaboration with NIC-AR to provide safety and security to the citizens and tourists in the state.

Amidst the Covid crisis and strained relations with China, proximity to the latter makes Arunachal very vulnerable.

Under such an unprecedented situation, strict adherence to lockdown has helped the state to keep the rising number of Corona cases in check.

“Our main duty is the enforcement of law and order. But, considering the pandemic, we never thought that we would have to also convince people, requesting them to follow the lockdown norms and actually work towards enforcing it. The police need to be on duty 24X7 besides helping the needy and the elderly with food and medicines. This was a new exposure. Initially, after a few days when there was a need to enforce stricter lockdown, people also realised its need and cooperated with us. So we have seen ourselves fit more into the role of counsellors, asking people to stay at home for their own good. In a few cases, we have had to take action as well. It was a totally new challenge that my force has coped so well to.”

Arunachal Pradesh is guided by its own customs and rituals that have made the fight against Corona a little easier. Tribes of the region had implemented their own customary rituals which are equivalent to a lockdown, much before COVID-19 struck. Though the state is geographically closest to China’s Hubei province, however, the practices and rituals of the Tanis have kept people safe. The indigenous tribal quarantine protocol proved very helpful and gave a huge impetus to the fight against the virus.

“A big thing about Arunachal is people here are very cooperative. There is a concept of village quarantine since ages. So, they are following lockdown except for a few cities like Itanagar and Pasighat. Otherwise, they are shoulder to shoulder with the police and that makes our job easy.”

Being the frontline workers, police themselves are in need of a large quantity of mask as the number of cases is rising in Arunachal Pradesh. To address this, family members of the police personnel have taken up “Mask for Arunachal Campaign” and are stitching them for the cops working in the frontline to contain the spread of COVID-19. Upadhaya said to avoid being dependent on the masks being sold in the market, family members of the police personnel have voluntarily come forward for the initiative. He added that this initiative will not only allow helping others but also create a constructive work culture among them.

“We had procured a sufficient number of masks from the start to keep our officers safe. We have also started our production of masks with setting up of a tailoring shop in our battalion where our police family voluntarily came forward and began stitching masks. We maintain the supply of sanitisers to our staff as well. We have also got PPE kits from Ludhiana.”

The terrain in Arunachal has somehow helped the government and the police to control the surge in Covid cases. Although the international border remains sealed, 12 check-gate quarantine facilities have been set up in the state to monitor people coming from outside.

“We have strictly enforced the lockdown so far as per the Government of India guidelines. We have also counselled and registered cases if people are not complying with the rules. But with fewer roads, enforcing the lockdown is easy. We have put nakas and check gates in several parts of the city. Social distancing norms are also strictly followed.”

Arunachal Pradesh has always given significant importance to the protection of Tribal rights. The mention of it in the official website of the state police clearly shows how much the government, administration and the force are concerned about the same.

“Good thing about Arunachal Pradesh is there is the one communicating language as everybody speaks Hindi. Although for the locals, despite having their own dialect, the link language is Hindi. For recruitment, we have a policy — 60 per cent locals (people from the same district) and 40 per cent from others. There is close coordination between officials and traditional bodies.”

As the North-Eastern-most state of India, Arunachal Pradesh borders Assam and Nagaland. It shares international borders with Bhutan in the west, Myanmar in the east, and a disputed border with China in the north at the McMahon Line. Itanagar is the state capital, which is the largest of the Seven Sister States of North-East India. Arunachal can be roughly divided into a set of semi-distinct cultural spheres on the basis of tribal identity, language, religion and material culture: the Tibetic-speaking Monpa area bordering Bhutan in the west, the Tani area in the centre, the Mishmi area to the east of Tani, the Tai/Singpho/Tangsa areas bordering Myanmar and the Naga area to the south, which also borders Myanmar. In between, there are transition zones, including the Aka/Hruso/Miji/Sherdukpen area, between the Tibetan Buddhist tribes and the Tani hill tribes. In addition, there are isolated people scattered throughout the state, such as the Sulung.