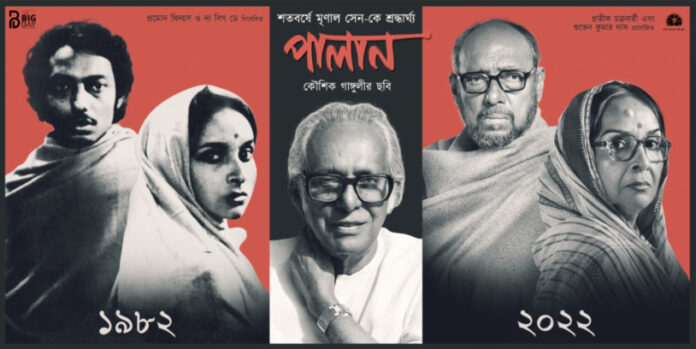 We had earlier reported how director Kaushik Ganguly’s perspective of cinema changed after watching Mrinal Sen’s Kharij in 1982. The film in which a minor, a son of a domestic help dies mysteriously in a locked kitchen, had moved Ganguly. The film exposed the hypocrisies of the Bengali bhadralok class. How would those characters in Kharij behave in today’s society? Has much changed? As the legendary filmmaker turns 100 next year, Ganguly couldn’t think of a better film but Kharij to seek inspiration from. Ganguly’s Palan is inspired from Kharij. The characters remain the same, only they have aged and the house has dilapidated.

“Mrinal Sen used to pick characters from the alleys of Kolkata and place them in his films. They were of flesh and blood. We are not Mrinal Sen. We have tried to make a film in our own way. It’s our humble tribute to the great filmmaker,” said Ganguly.

Mamata Shankar, who had her debut with Sen’s Mrigayaa, was happy that Ganguly chose Kharij to pay homage to the master filmmaker. “I wouldn’t have come to films if there was no Mrinal Sen. I am glad that Kaushik thought of this concept,” she said.

The makers have unveiled the main characters from the movie and also the poster of Palan. It features Mrinal Sen in the middle with his Kharij actors on one side, and Ganguly’s version on the other hand.

Produced by Pramod Films & The Big Day, Palan will be released in 2023.