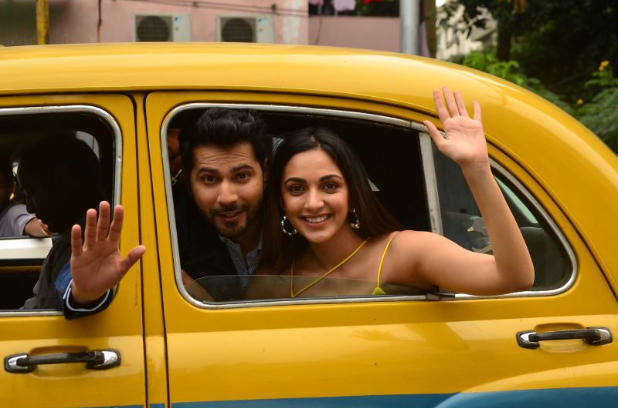 Varun Dhawan and Kiara Advani, the gorgeous pair of JugJugg Jeeyo, made a brief halt at the iconic Flurys before arriving at the five-star hotel to meet the press in Kolkata. At the celebrated Kolkata bakery, they gorged on sumptuous rumballs, but Varun was craving for mishti doi. So, he made sure he had his share of Bengalis all-time favourite dessert and biryani too during lunch.

Varun is a bundle of energy. Kiara, on the other hand, has a calm demeanor. However, both of them agree that on the set of JugJugg Jeeyo, it was Anil Kapoor who overpowered them all when it came to fitness and energy. “Anil sir is fitness personified. Varun is a gym junkie. But Anil sir’s energy is of a different level. Also, his lifestyle is so clean. Anil sir was the youngest superstar on the set,” said Kiara, who is currently basking in the success of Bhool Bhulaiyaa 2.

JugJugg Jeeyo is a family entertainer, and brings back Neetu Kapoor on the big screen after a hiatus. The film throws light on many married couples in India, who despite being married want to be separated or live separately.

Varun, who’s married to his childhood sweetheart Natasha, believes it’s important to have a strong friendship with the person you get married to. In fact, that’s the advice he has given his co-star Kiara. The Kabir Singh actress, meanwhile, comes from a family of happy marriages. So, she believes in the institution of marriage. “Everybody has a next chapter in their life … More importantly, it’s about choosing the right life partner. In my heart, I want to marry only once. I want to marry the person I want to grow old with,” Kiara says during her promotional tour of JugJugg Jeeyo in Kolkata. Kiara is rumoured to be dating her Shershaah co-actor Sidharth Malhotra for over a year now.

Varun believes JugJugg Jeeyo has a progressive ending unlike most family entertainers. “It’s the story of the film which made us do it. We all liked the way the film ends,” said the Badrinath Ki Dulhania actor.

However, these days divorce cases are on the rise in India and Varun says, people have become a bit individualistic in the age of social media. “I feel that somewhere in the age of social media, people have become individualistic. But then, human beings are social animals. We like to be in groups. I don’t feel there will ever be a dearth of love. Love will always exist,” says Varun. To this Kiara adds, “What is life without love?”

Varun believes in a successful marriage compatibility and friendship are important. Ask him what tips he would give Kiara on marriage, the Badlapur actor has an instant reply. “You need to accept the flaws of your partner too. Also, don’t lose the emotional connection. We talk about physical infidelity but emotional infidelity is a bigger problem for me. It’s also important to accompany your partner to places where she wants to visit. Go to museums if she wants to. I go to museums and don’t forget to say ‘I love you’ every day,” signs off Varun.