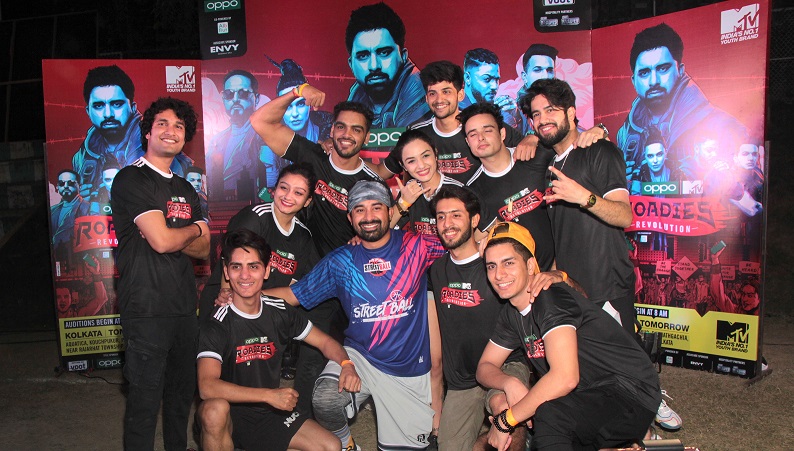 India’s longest-running reality show is back in Kolkata after 2 years and the buzz amongst the youth is at an all-time high.

Backed by a new theme, Roadies Revolution promises to offer unrivalled adventure but with a purpose – an intent to drive social change. Moving beyond the realms of a reality show, Roadies, this time, aims to revolutionize and bring about social impact, one task at a time.

Adding onto this spirit further, MTV punched in the magic of football by organising two friendly matches a day before the auditions. Ex contestants of Roadies took on Chelsea India team in the presence of celebrity leader Neha Dhupia and ringmaster Rannvijay Singh as an ode to the city’s undying passion for soccer.

Popular ex-contestants of the show (Yukti, Sohil, Gaurav, Lakshya, Tara, Kashish, Aarushi, Aashish) represented Team Roadies as they hit the ground with boys from Chelsea India in a friendly encounter on 10th January. Kids from Magic Bus Foundation, an NGO that works on child education also joined in the fun as they competed with Team Roadies in an evening replete with autographed footballs, jerseys, medals and more. Chilling temperatures notwithstanding, hordes of youngsters stormed the Clive House Playground as Neha Dhupia, Rannvijay Singh and Prince Narula spoke about the need for fitness amongst kids and the unending passion for Roadies.

MTV, the world’s premier youth brand, is a dynamic and vibrant blend of music and pop culture. With a global reach of more than half-billion households, MTV is a cultural home to the millennial generation, music fans, and artists.  50 MN fans following MTV across show pages on social media have made it one of the top brands in social influence as well. MTV consumer products are available across 35+ unique categories through strategic brand licensing tie-ups, leading to combined retail sales of 100+ crores present across all key online and off-line channels of distribution. In 2015, MTV also launched its first-ever café in the world, FLYP@MTV in New Delhi in India. MTV has a buzzing MTV Live business with properties like MTV Video Music Awards and MTV Bollyland. Aiming to entertain, lead and collaborate with young people through its evocative communication and youth relevant shows like Roadies, Splitsvilla, Coke Studio@MTV, MTV Unplugged, MTV Girls on Top, MTV Love School and keep them engaged through various cause led initiatives such as MTV Rock the Vote and MTV The Junkyard Project. For information about MTV in India, visit www.mtv.in.com

Viacom18 Media Pvt. Ltd. is one of India’s fastest-growing entertainment networks and a house of iconic brands that offers multi-platform, multi-generational and multicultural brand experiences. A joint venture of TV18, which owns 51%, and Viacom Inc., with a 49% stake, Viacom18 defines entertainment in India by touching the lives of people through its properties on-air, online, on-ground, in-shop and through cinema.