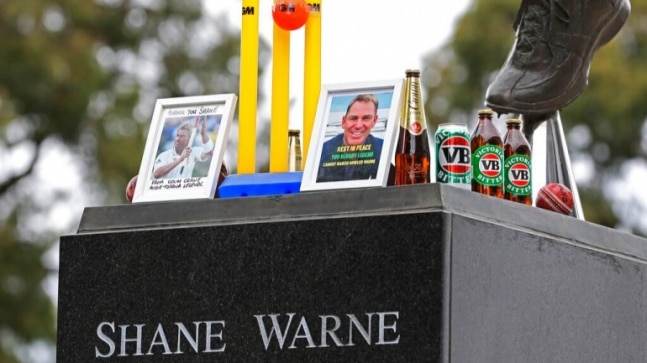 Melbourne: Legendary Australian leg spinner Shane Warne’s family and friends bid farewell to him at a private funeral held at his hometown in Melbourne on Sunday. The farewell event was held at The St Kilda Football Club.

Shane Warne’s family – parents Keith and Brigitte, brother Jason and children Brooke, Jackson and Summer – chose the St Kilda footy headquarters at Moorabbin to bid him farewell among those who loved him most, The Sydney Morning Herald reported.

“My heart aches that I can’t be in Australia tomorrow for Shane’s funeral,” she wrote on Instagram. “I was filming last night and, with the time jump, physically can’t get there.”

She shared severa old images of herself with Warne on Instagram.

At the end of the service, Warne’s coffin was given a lap of honour at St Kilda’s home ground as someof his favourite songs were played over loudspeakers, including “The Time of My Life” from the film “Dirty Dancing”. Tina Turner’s “Simply The Best” played as the hearse left the ground.

“He brought together so many things,” friend and television presenter Eddie McGuire, who delivered a eulogy, told the Herald Sun newspaper outside the venue. “The reason why he was so loved is because he was fallible, he was Superman.

“The magic part about Shane Warne was that he sprinkled his gold dust everywhere he went. He didn’t become a hermit, he brought his friends into everything in life.”
A state memorial will be held at the Melbourne Cricket Ground on March 30.

According to reports, Coldplay’s Chris Martin will present a remote musical tribute to Warne, while Elton John and Ed Sheeran will send messages.

The Sydney Daily Telegraph said Greta Bradman, granddaughter of another Australian legend, Don Bradman, is to sing the national anthem.

The legendary leg spinner’s body was found at a luxury resort in Thailand on March 4. His death, at the age of 52, is suspected to have been from a heart attack. An autopsy later revealed that he had died of natural causes.

Meanwhile, Warne, who had grabbed 708 Test wickets in his career, will be given a full public service at the iconic MCG stadium on Mar 30.