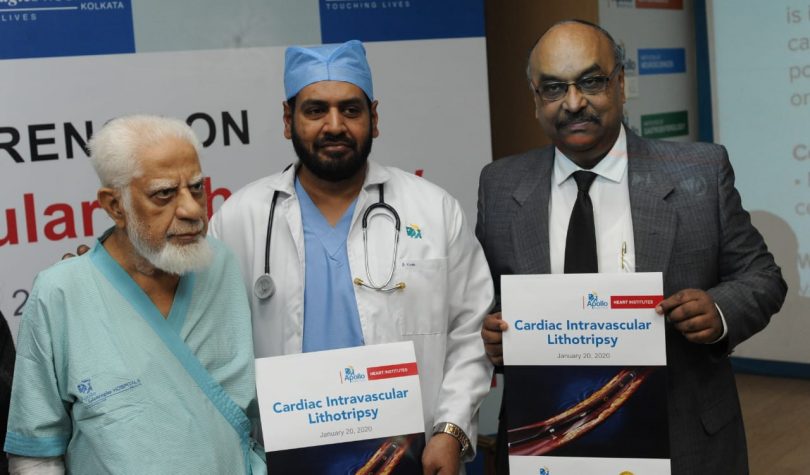 Sound waves were used to break down stubborn calcium deposits in the coronary artery of a patient at Apollo Gleneagles Hospitals on Thursday. The patient had undergone a coronary bypass surgery two years ago but fell ill again recently when hardened deposits formed in his heart arteries again.

Mohd. Baehshin, 76,  was, however, in luck because Apollo Gleneagles Hospitals, Kolkata — where he has been under treatment for years — was by now equipped to perform eastern India’s first Coronary Intravascular Lithotripsy or Coronary Shockwave Lithotripsy while employing the use of OCT (Optical Coherence Tomography), an advanced imaging technique.

“Sometimes when there is a calcium deposit in the arteries, the simpler processes of stenting — using a balloon — do not work. The calcium in the arteries is so hard that the balloon that is usually used to make room for the stent, itself ruptures. In such cases, a technique known as rotablation is normally used to physically grind down the plaque. But this new technique — Coronary Shockwave Lithotripsy —is safer as it breaks down the obstinate obstruction through sonic pulses,” said Dr Aftab Khan, Senior Consultant Interventional Cardiologist, AGHL.

According to doctors, this new technique would prove beneficial especially to for the elderly, diabetics, patients with chronic kidney disease, those suffering from longstanding blockages and basically any patient with calcium deposits that have rendered the balloons used in stenting redundant.

The technique also stands to benefit those patients who have a recurrence of deposits in the artery after coronary bypass surgery.

Mr Rana Dasgupta, CEO, Apollo Gleneagles Hospitals, who was present on the occasion, said: “We have always strived to embrace the latest advances in medical science so that we can provide world-class services to our patients. We are able to walk this path because of the commitment of our doctors to excellence, which makes them acquire the skills required for such top-of-the-line procedures.”

It was in 1983, that Dr Prathap C. Reddy made a pioneering endeavour by launching India’s first corporate hospital – Apollo Hospitals in Chennai.

Now, as Asia’s foremost trusted integrated healthcare group, its presence includes over 12,000 beds across 71 Hospitals, 3300 Pharmacies, over 90 Primary Care clinics and 150 Diagnostic centres, 110  plus Telemedicine Centres, over 15 medical education centres and a Research Foundation with a focus on global Clinical Trials, epidemiological studies, stem cell & genetic research, Apollo Hospitals has been at the forefront of new medical advancements with the most recent investment being the commissioning of South East Asia’s very first Proton Therapy Centre in Chennai.

Every four days, the Apollo Hospitals Group touches a million lives, in its mission to bring healthcare of international standards within the reach of every individual. In a rare honour, the Government of India had issued a commemorative stamp in recognition of Apollo’s contribution, the first for a healthcare organization. Apollo Hospitals Chairman, Dr Prathap C. Reddy, was conferred with the prestigious Padma Vibhushan in 2010.

For 35 years, the Apollo Hospitals Group has continuously excelled and maintained leadership in medical innovation, world-class clinical services and cutting-edge technology. Its hospitals are consistently ranked amongst the best hospitals in the country for advanced medical services.