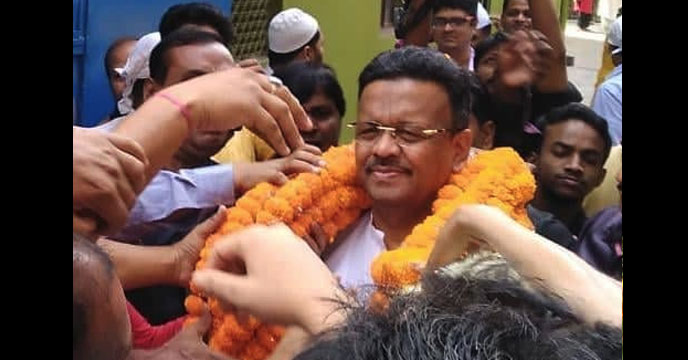 “I am thankful to the Chief Minister and the party for giving me this opportunity,” said Hakim after assuming the office of the Mayor of Kolkata on December 3, 2018. City’s 29th Mayor’s political metier is earmarked by the people-friendly image that he precisely curated since his political debut in the late 1990s. “Trinamool Congress as a party has always fought against the goliaths of politics,” he quips.

While hurriedly having his late lunch comprising two rotis and aloo sabji at the Kolkata Corporation headquarters, he says: “As a young politician, I countered a slew of political barriers while fighting for the war of change against the Left rule that crushed almost every possible uprising during their 34-year regime. However, they failed to puncture the mega movement spearheaded by our supreme leader and present Chief Minister of Bengal Mamata Banerjee.”

Pundits believe that the political climate of the nation has changed significantly in the last decade. Bengal has been the pivotal force to reckon with as Chief Minister Mamata Banerjee has played a central role in the national political scenario. Firhad Hakim has been a key member of her state Cabinet and his coronation as the Mayor of Kolkata is no surprise. In all these years, he has been the ‘crisis manager’ of the party which he himself acknowledges: “Well, that is a compliment but on a serious note, I always look to keep my calm. I have learned it from our Didi, how she handles crisis situations and ultimately comes up with a feasible inclusive solution.”

As the Mayor of the City of Joy, certainly ‘Bobby’, lovingly addressed by his supporters, fans and well-wishers have a huge responsibility. He has already made his intentions very clear from the very first day. “As the Mayor of Kolkata, my primary focus is to provide basic services to this city. We are already working very hard to provide seamless citizen-friendly basic services — be it the uninterrupted supply of drinking water, better roads, improved public healthcare facilities or other services concerned with the general public. But no doubt, our special focus will be on the environment. A greener and cleaner Kolkata is our main agenda,” he adds.

Kolkata, a famously cultured city of 14.5 million people — once the second city of the British Empire after London — has seen a mammoth growth of population in the past few years, triggering immense environmental pollution.

Kolkata’s First Lady Ismat Hakim, who has witnessed the journey of Bobbyda day in and day out points out: “One thing I can definitely say that my husband has always been a people’s person. He doesn’t discriminate against anyone and that’s why he is ‘Bobby Da’ for everyone. Sometimes, I really envy him when says he has to attend five wedding receptions in a day. But deep down I know that this man is a very warm-hearted individual. A dutiful person of his calibre is so rare these days! How can I forget those days in the early 90s when we eagerly used to wait at the counting centre? It is due to the love of his people that his winning margin has improved with each passing year. Now, all of my daughters have established themselves. The values and ethics of Bobbyhaves been key to their success. His simplicity is adorable and we are like best friends. Bobby’s man-management is unique and in his career spanning for almost two decades, he has been a perfect team player.”

Very few people know that Firhad Hakim luckily survived a police attack during the Martyrs’ Day rally (July 21) in 1993, when the police open fired at the protestors who were led by Mamata Banerjee. Ismat Hakim adds: “We have seen our Didi from close quarters. Her commitment to people is unquestionable. I remember, when she was fasting in Dharmatala, Bobby barely had food at home. I remember he reluctantly told us during dinner time: “How can I have dinner when Didi is not having anything?” As a mother, I have been very busy with my daughters’ education but Bobby has been more than a pillar in our family.”

A perfect family-man, a true friend and a mass leader — the Mayor of Kolkata has already set his target. “Over the years, Kolkata has truly become a world-class city. But like all other cities and megacities around the globe, ever-increasing pollution is a major concern. On one hand, we will work on urban forestry, nature parks and other viable options and on the other, we will focus on increasing the awareness of the masses. Unfortunately, we don’t have so many wetlands in the city. We are chalking down plans to make sure that new policies are framed to curb pollution in the city. With my years of experience in administration and public policy, I believe that team KMC will definitely usher a greener Kolkata in the near future,” assures the Mayor.