More
More
HomeEntertainmentGangubai Kathiawadi review: Engaging the viewer, but disengaged from its messaging

Gangubai Kathiawadi review: Engaging the viewer, but disengaged from its messaging 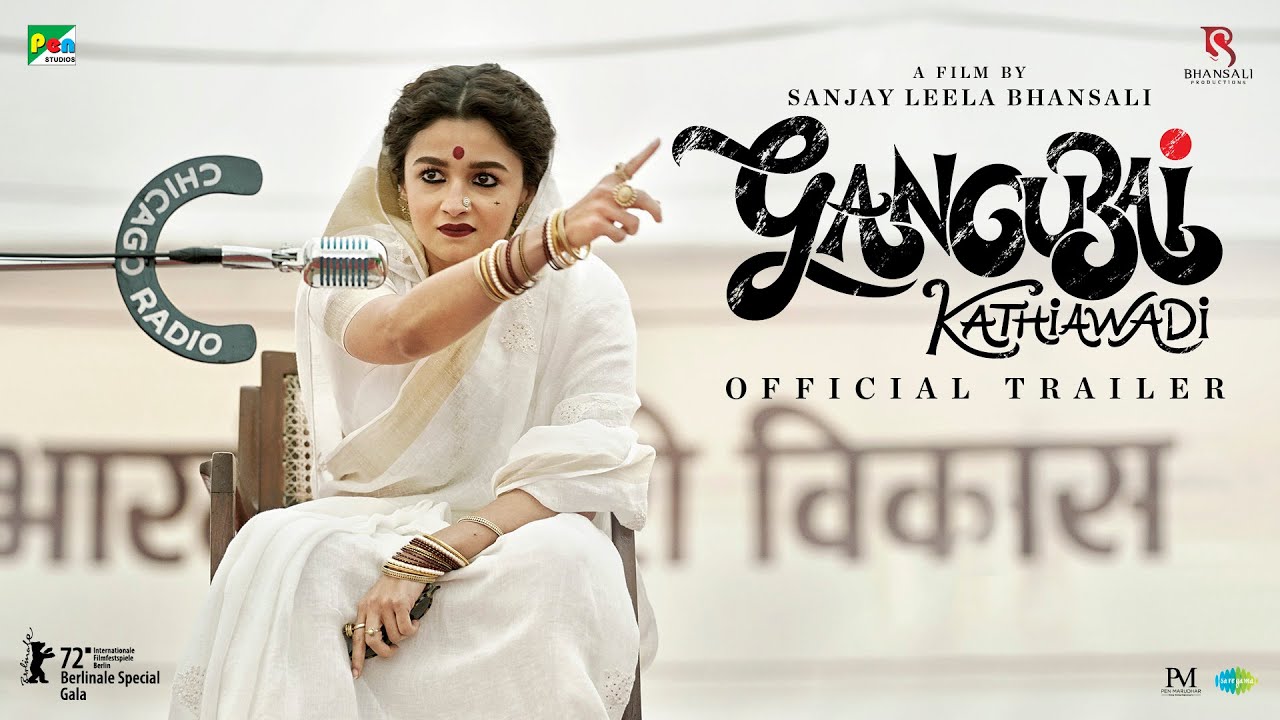 When it was announced that he would direct an adaptation of a chapter entitled ‘The Matriarch of Kamathipura’ from the book Mafia Queens of Mumbai by S. Hussain Zaidi and Jane Borges, a feeble voice in me, which was resisting the usual assault of unrelenting geometrical opulence that Bhansali’s films subject us to, sensed a glint of hope; I hoped that this could be the film where a riskier Bhansali would flap his wings, his mannered framework tempered by a more compelling brutality.

Gangubai Kathiawadi, however, is eventually a conflicting reflection of a filmmaker at odds with the extent to which his familiar tropes and motifs could be disestablished.

In 1795, the Maratha confederacy defeated the Nizam of Hyderabad in the Battle of Kharda. After territories in the conquered land were ceded to the Marathas, several labourers/workers and artisans from Telangana migrated to erstwhile Bombay to build permanent residences there. These workers were referred to as ‘Kamathi’-s, and their enclave came to be known as Kamathipura. During the British era and after, Kamathipura gradually evolved into a hub of human trafficking and flesh-trading.

This neighbourhood serves as the focal point of the narrative and is elevated to the position of a nearly sentient entity in the eyes of the characters. The fascinating life of the titular character and her seemingly sedulous devotion to improving the lives of her fellow sex workers of Kamathipura propels the plot. Ganga Harjivandas (Bhatt), with dreams of becoming an actress in Hindi films, is lured to Mumbai from Kathiawad in Gujarat by her lover and promptly (and forcefully) sold to a brothel in Kamathipura. The rest of the film is an account of Ganga’s transformation into Gangubai, her advocacy for the rights of sex workers, and her conquest of her ur-oppression.

The film expectedly takes sweeping liberties with its portrayal of Gangubai, whose metamorphosis into a messiah of the downtrodden is not convincingly conveyed. She becomes a “hooker-turned-madame with a heart of gold” whose every act, while construable as externally curt or abrasive, unfailingly nests an unwavering righteousness at its core. In service of this narrative, several of Gangubai’s dealings with drug peddlers, gangsters, and the mafia of Mumbai, which may possibly have had multifarious motivations beyond altruism as white as the sarees her character wears, are swept under the rug.

Also read: Audacious yet insipid, Gehraiyaan is a study in contrasts

The writing presents a moral unambiguity in the character, leaving the outcome of the performance to be buoyed largely by the performer. In the Chinese silent film The Goddess (1934), filmmaker Wu Yonggang skillfully utilised a Confucian convention of maternal virtue to dive into a more uncomfortable examination of the crushing maltreatment meted out to prostitutes in Shanghai at the time. In Gangubai Kathiawadi, Gangubai’s steadfast selflessness catalyses the genesis of a playful harmony among the women of Kamathipura, who have been deceived and forced into prostitution, often positing friendship as an outright negation of the challenges in conceiving social justice instead of as a conduit for pursuing them. For the viewer, this can often belie the harshness of their lives that the film is usually content with only hinting at.

The screenplay, by Bhansali and Utkarshini Vashishtha, has an anticipated flair for seeking grandiose celebrations in the more mundane proceedings of Gangubai’s life, but it suffers on account of multiple damages that it incurs while charting that path. After Padmaavat (2018), Bhansali resorts again to a narrator voicing the intended sentiments behind a few critical junctures of the film, leading one to perceive the saga as a piece of mythological high fantasy revolving around the travels of a queen grounded in the dirt of prosaic impediments.

Unfortunately, the script seems unwilling to embrace its dirt, preferring instead to shoehorn the director’s aesthetic sensibilities into whichever nook of Kamathipura it can find. A consequence of this pursuit is that it turns each moment in the film’s diegetic time into an event or a spectacle unto itself, ultimately becoming indistinguishable from a bland hagiography. As one watches the film, one begins to notice that most of its scenes as units follow their own three-act structures; a scene begins on a mellow note as an establishing shot introduces its general setting, only to be quickly interrupted by the introduction of an unpleasant conflict that toys with the mellowness for a brief while, before the conflict is artfully resolved with a few slick blows or a few flamboyant lines delivered with verve.

This often results in narrative conflict dissipating before it can be satisfactorily converted into complications of consequential heft. Without giving much away, two scenes struck me as noticeable and welcome exceptions to this overarching tendency: one involving an unlettered younger worker at the brothel requesting Gangubai to write her father a letter, and another depicting Gangubai’s emotional inflections as she has a timed phone conversation. Barring a few such shifts, the dialogue by Vashishtha and Prakash Kapadia is also largely overdramatic, with punchlines and one-liners accompanying raised volumes in the background score.

The nature of the production design by Subrata Chakraborty and Amit Ray is extremely reminiscent of Bhansali’s own Saawariya (2007), Milan Luthria’s Once Upon a Time in Mumbaai (2010), and Rahul Dholakia’s Raees (2017). The design itself is fairly detailed, but largely sidelined. Even if it is in shambles, Kamathipura is given a regal aura in honour of its “queen”. Some of the digital intermediate (DI) work with the sky and the clouds is also sloppy, adversely affecting the scenes that involve natural light. The interior lighting is far better, in the absence of extensive digital visual effects.

Sudeep Chatterjee’s cinematography faithfully upholds Bhansali’s obsession with centrally aligned wide-angle shots, particularly of the low-angle variety; they are not (ab)used as frequently as they were in Padmaavat or Bajirao Mastani (2015), but they pervade a large chunk of the film’s visual capacity and exhibit Bhansali’s continued discomfort in handling geographically constricted spaces.

The music, composed by Bhansali himself, is mostly forgettable. Some of the tunes are comfortably bearable in the film, especially because no song crosses the five-minute mark, but the soundtrack feels largely like a rehash of Bhansali’s earlier music, which remains preferable for me.

As stated earlier, the performers are left with a significant portion of the burden of voicing the narrative, and this is mostly splendidly done. While many cast aspersions on the casting of Alia Bhatt as Gangubai, the sheer strength of her performance is undeniable. She plays a 27-year-old Gangubai with unfaltering emotional conviction, wearing an assured and restrained smile on her face, which is ceaselessly battling tears that are always on the brink of flooding her. The problems that do arise in her performance are owing to an inconsistent Gujarati accent and a forced husky cadence that often sounds strained.

Vijay Raaz as Raziabai is another revelation; he brilliantly brings forth the character’s inhibited ferocities. Shantanu Maheshwari as Afsaan is inoffensively plain, but Jim Sarbh is a disappointment, playing an Urdu journalist with painfully stilted mannerisms. Ajay Devgn has an “extended cameo”, in which he is playing Rahim Lala, a slightly more religious and slightly more subdued version of his character Sultan Mirza in Once Upon a Time in Mumbaai. Unsurprisingly, he pulls it off intensely effectively.

Also read: The curse of ‘video game films’ lives on in Uncharted

What ultimately chiefly afflicts Gangubai Kathiawadi is perhaps inevitable in any film of this persuasion. The film has a pronounced inclination towards presenting a moral philosophy of prostitution that empowers the positions of those involved in the work, but the messaging is muddled by its inability to assert radical propositions.

It oscillates between hinting at the gruelling horrors that prostitutes regularly witness, and glorifying the prostitution that is sustained by those horrors as a more “respectable” trade than others. It is this unwillingness to abandon stale bourgeoisie notions of “respect” and “honour” that becomes the film’s Achilles’ heel. At one point, amidst thunderous clapping from her spectators, Gangubai declares that unless prostitution is preserved as a refuge for men to gratify their suppressed drives, their raging libidinal violence will force all women to be dislodged from their spaces of “honour”.

This notion of prostitution as an articulation of patriarchal libidinal repression that functions as the sub-normal bedrock of normalcy for the reputable and turns the sex worker into a perennial other distanced from the moral purity of the “home” needed to have been challenged by the film. Instead, the film chooses to remain within the claustrophobic boundaries of the liberalism of “civil society”, advancing only the trite and gendered argument that prostitutes can also be generous repositories of the ethical life, despite supposedly being the ones who are most physically “robbed” of biopolitical autonomy.

Noted academician and feminist activist bell hooks made a distinction between “marginality which is imposed by oppressive structures” and the “marginality one chooses as site of resistance, as a location of radical openness and possibility.” The film conflates one with the other, which I would completely accept if it psychologically engaged with the discourse in the first place. It does not. It preaches to reluctant liberals sentiments that might make them feel more outwardly progressive. This is a specific point of contention because the harrowing lives of sex workers deserve more than a sugarcoated appeal to hegemonic social morality. More often than not, the first stage in vanquishing the “unspeakable” is utterance. On that front, the film remains tongue-tied.