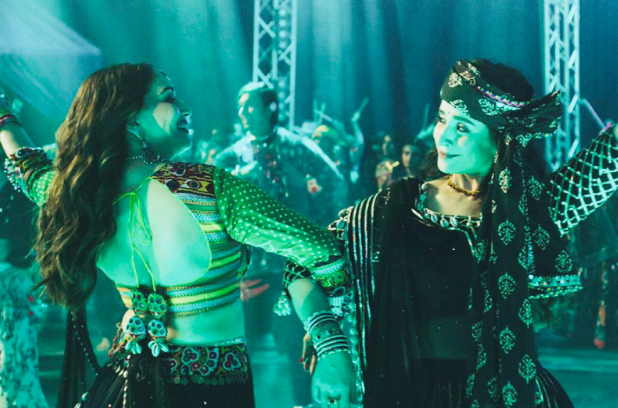 “A 90’s icon like madhuri dixit playing a queer character in #majama based in an orthodox setting is just the cultural reset we needed.” “I am not the same person I was before watching Maja Ma and Madhuri Dixit play a textually and explicitly lesbian character.” Such and more tweets were seen flooding social media, articulating the feelings and reactions of many who have watched the Amazon Original Movie, Maja Ma starring the iconic Madhuri Dixit.

Maja Ma is the story of Madhuri’s Pallavi Patel, an ideal Gujarati middle-aged housewife, who fights a battle of identity. Of course, it has its loopholes with the hideous American accents, the crowd pleasing ending but then Madhuri holding the pride flag in mainstream cinema makes the sensitive topic a topic of discussion in the drawing room. This indeed is something new and always welcoming.

Considering the positive reactions from audiences across the spectrum, the streaming service facilitated a deeply insightful fireside chat on “The Representation of the LGBTQIA+ community in Indian content”. The panel included Madhuri, Maja Ma director Anand Tiwari, CEO of Humsafar Trust Vivek Raj Anand, Shruta Rawat, who is the research manager at Humsafar Trust and co-founder of Umang – Humsafar Trust’s LBT initiative, mental health worker and counsellor Niki Ray and was moderated by Nikhil Taneja, Founder-YUVAA.

The fireside conversation touched upon how the movie could be instrumental in bringing a new wave of awareness and acceptance of a sensitive subject such as gender identity. The panel further discussed how this film is a noteworthy example of content becoming an influencing power in helping normalize LGBTQIA+ conversations in Indian households.

The panel members discussed and shared their views on the importance of treating the subject matter sensitively and helping remove the biases around it. The conversation also took a deep dive into why it was necessary to tell this story through the character of Pallavi, who plays a homely, relatable middle-aged woman bringing home the truth that sexuality is just a small part of who you are and does not define you. What you do in your life, and the impact you bring in the life of others around you, is what really matters.

On being asked, about her experience of playing a middle-aged woman who comes out of the closet, Madhuri shared, “When I read the script, I felt this was a story that needed to be told, to share the message that it takes all kinds of people to make this world and we must accept one another for who we are. Throughout my career, I have gained the love and trust of my fans and I felt confident that my voice would be heard when I talk about a sensitive topic like this, and the turmoil faced by someone who has to go through a similar situation, and perhaps even help spark a change in existing perceptions.”

“I recently saw a tweet by a viewer who watched Maja Ma with her mother and grandmother, and they all loved it. This is what the movie is really about, crossing generations and touching the hearts of the viewers with its beautiful message. I am glad to see that the film is already making an impact and initiating conversations within families and across age groups,” the Dhak Dhak girl added.

This is a well written dialogue 😭 They should play again as lovers 🥺 #MajaMa pic.twitter.com/d0Rqe4gtS4

Tiwari, who also directed the hugely popular musical Bandish Bandits, said, “Maja Ma is a story about acceptance. “I believe that being accepted by one’s family members for many of us is vital, be it about one’s gender identity, career choice, or anything else that is important and really defines you. It can truly empower you.”

“I believe any story that the audience can connect and relate to, works. I strongly feel Pallavi is a character that resonates. She represents hundreds and thousands of those people, men or women, who have lived with this truth about themselves for decades but never spoke about this one aspect of their lives,” said Vivek Raj Anand.

Shruta Rawat, co-founder, Umang believes how often people assigned female gender at birth, generally get boxed in. “Until something life-changing happens, people around you do not ask what you want or what you want to be. People do not notice you or give you importance. It’s only when a certain truth about you comes out, be it about your gender identity or anything else that cannot be neatly labelled per your gender, is when you are in the spotlight. That’s why Maja Ma resonates so well, and connects strongly, with the youth of today,” she said.

For decades, the onscreen representation of the members of the LGBTQIA+ community in Indian cinema has been downplayed due to various social prejudices. One seldom comes across a mainstream movie that truly does justice to the challenges that the members of this community face. Here a light-hearted family drama like Maja Ma manages to convey a deep and relevant message that provokes the viewer to move towards creating a progressive society where each one of us is seen and heard not based on our gender or sexual preferences or orientations, but as human beings. Also, with established stars like Madhuri playing a bold character of a lesbian, can have an impact of colossal proportions in driving the representation of the LGTBQIA+ community, underscored the fireside discussion.

“There is a huge section of Indian people who do not have access to any information or awareness about LGBTQ-related feelings or experiences. In such a situation, Bollywood can serve as a big medium of communication to the masses. So, in terms of impact, if a movie like this, when watched by masses across the country and beyond, can take the message of acceptance across and manage to spark even the slightest thought in people’s minds, that’s a good enough beginning,” said social entrepreneur and mental health expert Niki Ray.