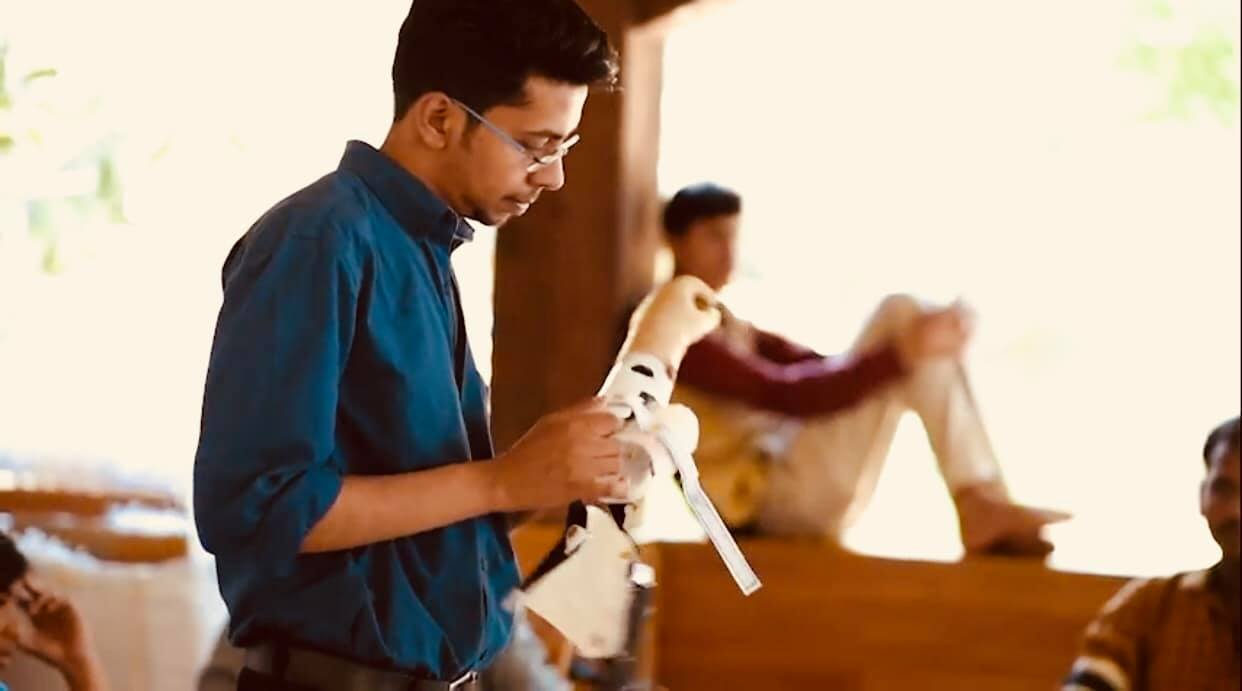 The number of people with disability in India is around 2.68 crore which is 2.2 percent of India’s population as per Census 2011. 20 percent of them have loco-motor disability and about 69 percent of India’s overall disabled population lives in rural areas. The price of fixing an amputated limb is so high that it is unaffordable to most of the disabled population. This hard-hitting fact led Inali Foundation to innovate in order to make amputated arms accessible.

Inali Foundation was conceptualized by Prashant Gade as a non-profit organization in 2016. In the last four years they have provided more than 3500 upper limbs to people across India free of cost. As Prashant Gade said, “We do not intend to provide just a hand. Our aim is to make people independent so that their disability does not become an impediment. We intend to scale up our production so that we can help one lakh people every year.”

The answer to life

Prashant Gade left his career in engineering and started working at Curiosity Lab where he started teaching robotics. However, he soon realized that teaching was not his calling. Thereafter he went to Pune to start working as a research fellow at Fab Lab where he got the opportunity to join a distance learning course at the Fab Academy run by Center of Bits and Atoms at MIT US and had to submit a project.

While doing so he came across Nicholas from France who had unfortunately lost his arm in an accident but made a robotic arm for himself. “This inspired me to make prosthetic arms for my project.” Once Gade went out to interact with people who need prosthetic arms he came across a little seven year old girl named Shreya which led him to wonder how to help her out. “I approached a company for prosthetic arms where they quoted 12 lakh for one arm. 90 percent of the people from any developing country like India will not be able to afford the expenses. So I calculated that more than 45 thousand people in India have lost their limb and 85 percent of them are living without a solution. The only problem was affordability. This gave me a sense of purpose to life and I started out on the journey of making prosthetic arms affordable to people.”

Prashant Gade’s journey of making affordable prosthetic arms was not an easy ride. “I did not have money and lived on two meals a day. I posted a video on a crowdfunding platform to get some funds. Luckily Mr. Deependra Mehta, the technical head of Jaipur Foot, the world’s biggest organization that works for prosthetics, looked at my video and asked me to present my design,” said Prashant Gade.

Even after the design was ready the challenge was to make it affordable. Gade uploaded all his videos on YouTube and one day a professor from the US asked him to come to a conference on biomedical devices in the US. Gade was able to impress all the delegates with his design and got 10 3D printing devices in return which made it possible for him to come up with his low-cost design which costs only 75 dollars.

Coming up with the name

Inali was the woman who had stood by Gade in his long journey. So he named his organization after her. “Inali had always believed in me and made me think that it is possible. She had shown me the path in times of difficulty. So I devoted her name to the foundation,” said Prashant Gade.

Innovators or researchers like Gade need support when they start off. To address this Union Government has formulated schemes like IRIS (Initiative for Research and Innovation in Science), INSPIRE (Innovation of Science Pursuit for Inspire Research) or IMPRINT (Impacting Research Innovation and Technology) which handhold scientists and researchers.

Affordable healthcare for all

The human mind is complicated. “The first hand that I developed for 75 dollars was just a basic one. Our goal was to make a hand that is more functional, flexible and enabling finger movement. The challenge was to develop an arm that is affordable and useful at the same time,” said Prashant Gade who feels providing affordable healthcare to all is a major challenge in India and access to quality healthcare is limited to the upper and middle classes. However, The Ayushman Bharat scheme launched by the Union Government aims to provide affordable health insurance to 10.74 crore poor families.

The basic model of prosthetic arm is a ‘touch-based’ arm which enables a person to open or close his fist using touch sensors. The upgraded version is a ‘myo-electric’ arm that works with the help of the brain’s electric pulses. So the brain signals the arm to move through electric pulses. The third version is a ‘gesture-based’ arm that works in accordance to the signal from a person’s gesture. For example whenever a person moves his ankle the arm works.

“Let us say a person works at a factory who drills. So he does not need a hand but a drilling machine. So we are thinking of making a hand whose finger is a drill machine. Similarly, a normal person cannot rotate his hand 360 degrees but an amputated arm can! So we are working towards using the term ‘differently-able’ in a correct way. We are trying to think in a different way so that we can provide more freedom to a disabled person that a normal person cannot think of,” shared social-preneur.

Prashant Gade’s innovation has impacted many disabled persons across India. His journey to make it possible for an armless person to drink water using his hands or to shake someone’s hands is inspiring and heartening at the same time.

Gade shared his lifetime learning thus – “Education comes from practical knowledge. Innovators should get the freedom to work independently.”