Himachal Pradesh all set to inaugurate its Traffic Park with difference 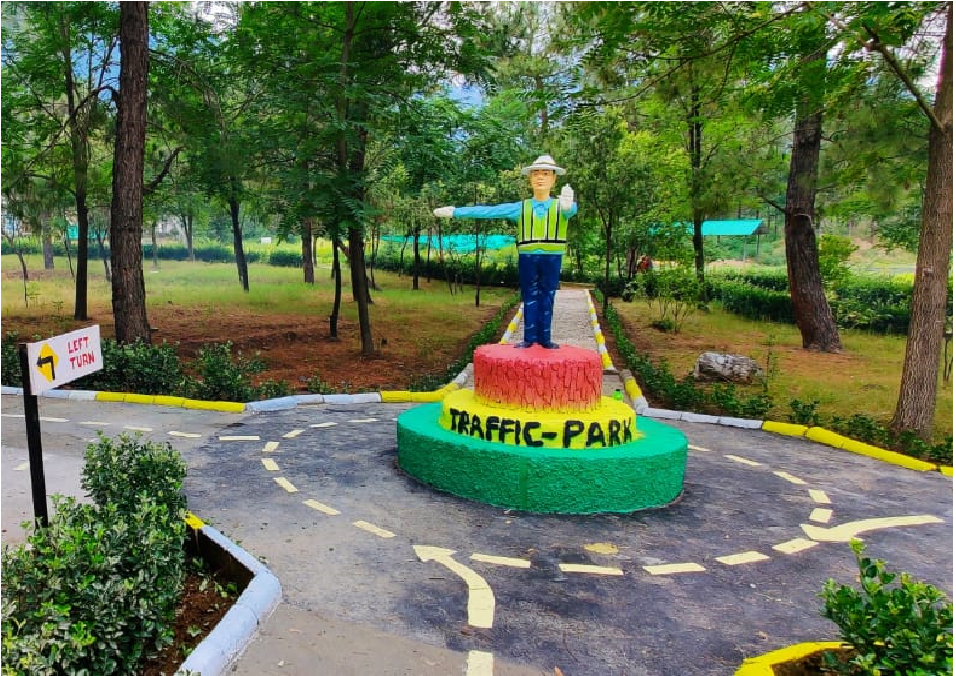 Educating children about the rules of traffic goes a long way towards ensuring road safety. We have seen Traffic Parks come up in many Indian cities. However, the one at Mohal, Parvati Forest Division in the hilly state of Himachal Pradesh stands out from the rest.

The Optimist News got in touch with the young energetic Aishwarya Raj IFS who is the Deputy Conservator of Forest, Parvati Forest Division to find out more.

The novelty of thought

It all started when the Deputy Commissioner of Kullu, Dr Richa Vema IAS wanted to do something innovative to spread awareness on traffic rules among the locals and set up the first Traffic Park in the state.

DCF Aishwarya Raj came up with a cost-effective idea. “I suggested that since we already have an existing nature park in Parvati Division at Mohal, we could probably use a patch of the Mohal Nature Park and convert it into a Traffic Park. More so, as the park has a decent footfall and is centrally located,” the forest officer said.

Like most other traffic parks in India, the team started planning on the same route. However, Aishwarya Raj thought of something out of the box. “Initially we thought we would be talking mostly about the traffic rules. But while I was conceptualizing, suddenly it occurred to me that since we are setting it up within a Nature Park why not link it to the environment as well? So we went ahead and decided to include the importance of trees and avenue plantation and marry the concept of conservation of nature along with the importance of following traffic rules,” Aishwarya Raj explained.

The Traffic Park was ready in two months during the pandemic. “The lockdown in Himachal Pradesh had exempted the civil works that were going on. We started working from the first week of April and we were able to complete the project by the end of May,” the officer informed.

Along with DCF Raj the team comprised the Block Officer, who is in charge of the Nature Park along with three Forest Guards. The other works like making the life-size traffic policeman model and so on were done by outsourcing it to vendors through regular departmental procedure.

If you are planning to visit the new Traffic Park as soon as the COVID restrictions are relaxed you may expect to learn about the advantages of green spaces, importance of trees and how they benefit you. “We tried to depict some concepts related to the ecosystem through various models. For instance, to explain the concept of carbon sequestration we tried to explain that trees are giving out oxygen and absorbing carbon dioxide from vehicular emission,” said Aishwarya Raj.

While executing the idea Aishwarya Raj also came up with many more new ideas. Linking the pandemic and shortage of oxygen supply a model has been placed depicting oxygen being released by the trees at one corner of the park. “The visual depiction is being done to sensitize people about the importance of having greenery around you,” Aishwarya Raj explained.

A cycling track has also been made for children, while a life-size model of a traffic policeman placed at a crossing, apparently giving directions to cyclists adds fun to the experience. Moreover, different sign boards similar to road signs have been placed all along the cycling track. Children can get acquainted with these signs and learn from experiential knowledge while on a fun ride.

Given the limited budget the team had to choose between two battery cars and four bicycles. Eventually the team decided to go for the cycling track. “Though opting for cars would have been a better revenue model for us in terms of ticketing, we thought promoting cycling would be a better alternative since we are trying to focus on environmental conservation as well,” the conscious officer shared.

“Road signs are common for city folks but in Himachal Pradesh which is mostly rural, not many people are aware of the traffic and road safety rules. You will not see a lot of traffic lights here because the roads are only one way along the mountains. The Traffic Park is an effective way to teach people about the various aspects of traffic, including, zebra crossings or bus stands and also the signs which are more relevant to the mountains like Steep Hill Ahead or Steep Curve Ahead,” Aishwarya Raj informed.

Talking about the importance of participatory approach towards governance Aishwarya Raj IFS said, “Most of us choose to ignore the traffic guidelines though we are aware of it. However, it is different for children. Since children are in the phase of learning and questioning they might hit back at their own people when they sense that certain things are not right.” Thus educating children at the right time may lead to societal change of behaviour.

The traffic park has been conceptualized in such a way that it will provide wholesome environmental edu-tainment to children as well as parents. “When the children are cycling the parents may probably be looking at the 3D models that we have created and get a sense that there is something called avenue plantation which can be practiced elsewhere,” the officer suggested.

“Himachal is a largely rural state where local panchayats are active and the village communities have a stronghold. When people visit the park and get to know about these eco-friendly practices along with their children I hope it will help to spread the message that we want to convey,” Aishwarya Raj added.

The Traffic Park is not open to the public yet on account of Covid restrictions. However, it has already garnered a lot of curiosity among the locals, especially the youngsters. Tourists from other states usually head towards Mohali, Kasaul and the upper reaches, but for the locals Mohali Nature Park is a well-known recreational space where they visit with their children and families. “The very concept of a Traffic Park is in itself quite new to the people over here. It is the first time it is being set up in Himachal Pradesh, which has caught the interest of the locals,” Aishwarya Raj said.

According to Aishwarya Raj IFS, a webinar will be conducted in a few weeks in which some of the prominent schools in the region will take part. The session will have a virtual tour of the park, along with the entire cycling track showcasing the importance of nature, inculcating traffic sense among the children as well as combining the two concepts.

The 2017 batch IFS officer calls himself a ‘Dilliwala’ on Twitter as he is a Delhite by heart. After graduating from St. Stephen’s and completing his B-school from Indian Institute of Foreign Trade, Aishwarya Raj IFS had worked in the corporate before opting for the civil service. “Having seen a lot of things from the other side I always had the urge to do something that can impact people in a positive way,” he said.

“The beauty of Indian Forest Service is that it gives you a lot of scope to showcase your creativity. Given that a lot of conversation is happening around the environment and climate change, it becomes all the more imperative for young officers to be able to blend the old ideas with the new. We should also deftly and optimally use technology to promote the small things we are trying to do in different parts of the country,” he concluded.