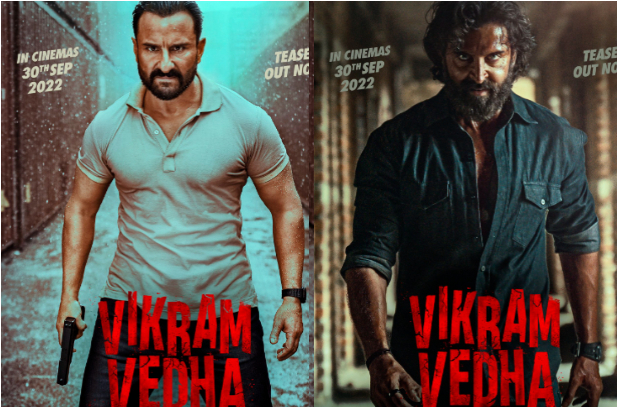 The first teaser of the much-awaited Hindi remake of Vikram Vedha is finally out. Starring Hrithik Roshan and Saif Ali Khan, it is the ultimate face-off between the good and the evil.

The one minute 46 seconds long visual teaser from the film makes for a wholesome tease into the world of Vikram Vedha with Hrithik playing as Vedha and Saif as Vikram. Directed by Pushkar–Gayathri, who directed the original 2017 Tamil film, the teaser has the necessary ingredients of a mass entertainer with intense gun fights, crowd-pleasing dialogues and a lot of swag.

Though most of the netizens look impressed with the power-packed first teaser of the Hindi remake, there are others who are comparing Hrithik with Vijay Sethupathi. And yes, it has already started trending on Twitter. The original film starring R Madhavan (Vikram) and Vijay Sethupathi (Vedha) was a massive hit.

“What a crap idea to think even to make #HrithikRoshan as Vedha which was perfectly nailed by #VijaySethupathi #VikramVedha remake is just crap,” wrote a user.

#VijaySethupathi
The new #VikramVedhateaser is nowhere near the original one. It's impossible to match Vijay Sethupathi as #Vedha. Even R Madhavan has performed incredibly well as #Vikram.#VikramVedha #vikramveda pic.twitter.com/q3fQ0wTN9q

Some netizens compared Hrithik’s accent in Vikram Vedha with Super 30 and trolled him too. “Why the hell has Hrithik Roshan that super 30 accent still In #VikramVedhateaser. Hrithik National Award Winner #VijaySethupathi ko match karega,” wrote a user.

There are some who praised Hrithik for all the swag. “Only #HrithikRoshan could have replaced an actor like #VijaySethupathi  in this film. And he’s absolutely nailing it. #VikramVedha #VikramVedhateaser,” wrote a fan.

Only #HrithikRoshan could have replaced an actor like #VijaySethupathi in this film. And he’s absolutely nailing it. #VikramVedha #VikramVedhateaser pic.twitter.com/OcFbm2M8s2

I don't know if he can match the level of Vijay Sethupathi's Vedha role but I'm sure that Hrithik is going to create an impact in this villain role at Bollywood industry. All the best for #VikramVedha team.
#HrithikRoshan #SaifAliKhan
#VijaySethupathi #Madhavan pic.twitter.com/n7kKwlOQy3

The story is full of twists and turns, as a tough cop Vikram (Saif) sets out to track and chase a dreaded gangster Vedha (Hrithik). What unfolds is a cat-and-mouse chase, where Vedha – a master storyteller helps Vikram peel back layers through a series of stories leading to thought-provoking moral ambiguities.

Presented by Gulshan Kumar, T-Series and Reliance Entertainment in association with Friday Filmworks & Jio Studios and a YNOT Studios Production, the film will hit the big screens globally on September 30, 2022.